1 April, Monday – Woolamena started making a “controlled” ruckus yesterday around evening chores, but showed no other signs of any labor or discharge, even when we tucked everyone in bed at 10 PM. At 2 AM we found her with a very small ewe lamb that was up and thoroughly cleaned. Based upon the size of the lamb one would have to believe that Woolamena was not done. However, it was easy to spot that she had already passed her placenta, as it was lying a few feet away from the lamb. After a bit of searching I found an even smaller ram lamb, not even 4 pounds. It was obvious, based upon his appearance, that he was dead when he was delivered. Based upon the size and appearance of the two lambs one had to think these were from a set of triplets, but a more thorough search of the barn found no more lambs. (Later in the morning, in good light, an examination of the placenta gave no indication of an additional mummified fetus.) So, for whatever reason, Woolamena has one very small Calamity Jane and no other lambs.

Ariel’s was now the last planned pregnancy. Early this afternoon she went into labor. Within a few minutes she delivered a large ram lamb, Chuck, and immediately got to work cleaning up the lad. She is another “first timer”, so it was especially gratifying to finish off the scheduled lambing on a happy, positive note.

Exactly three weeks after it started, lambing is over (sort of!). It seems like it lasted a lot longer, but I think that is more of a function of the advancing age of the shepherds. Overall it has been a successful lambing, especially when compared to last year. When we pulled the rams from the breeding groups last fall, they had marked 35 of the 36 ewes they had been given. We used three rams who had not had any previous opportunity to show whether they were good at their assigned task. They managed to successfully breed all 35 of their marked ewes, basically within one heat cycle. (The few ewes that were remarked had been initially marked right at the beginning of breeding and, therefore, were just finishing a heat when they joined the rams.) Axel, Andrew and Aries were obviously up to the task!

In all 53 lambs were born. The two that did not survive were very small and extremely compromised. It was best for them, their siblings and mothers that they did not make it. All of the remaining 51 lambs are healthy and growing rapidly or at least steadily. Pneumonia has not raised its ugly head, as compared to last year. We averaged 151.4% lambs per ewe, which is not outstanding, but considering that the group contained a large number of first time moms it is not too bad a percentage. The ewe lamb to ram lamb ratios is the amazing number. There were 31 ewe lambs and 16 ram lambs (including the 2 that died at or before birth). That ratio figures out to 37.7% ram lambs.

The best part of the day was the evening barn check. We knew that we did not have to set the alarm for 2 AM! 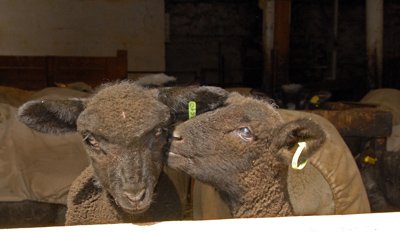 2 April, Tuesday – Everyone, including us, survived the night without interruption (almost). Some idiot had to telephone us at 2:30AM with a wrong number! Otherwise it was a pleasant day to look after lambs and their moms.

Those who have been following these narratives will remember that even though I wrote that lambing was over, it really is not. Just to add emphasis to that point, this morning we found at least one additional ewe who is pregnant as a result of the rams’ extra night out. We are now pretty certain about Umlaut, Vixie, Vesperea and Quazar. They are all due on or about April 6th.

Between now and the first extra arrivals, we at least have time to get all the current lambs and mothers into mixing groups. It will mean that we can disassemble all of the jugs, except for the four we know we will need. (Just to be on the safe side we will leave one extra up.) We will not start making early morning barn checks until Saturday, April 6th. Until then we will have a couple of days with regular daily lamb chores and normal bedtimes!