12 March 2014 – Derek and Derry led the parade but they jumped the gun! According to our calculations, lambing was supposed to begin tomorrow. Yippee decided that since it was going to get cold tonight that she would just get lambing out of the way early. When we went to the barn to begin evening chores we found her with two lambs. The larger, Derek, was leading her around the barn. He was squeaky clean and dry. It took us a minute to realize that there was a slightly smaller boy, Derry, at the other end of the barn. He too was up and trotting around but had not followed his mom and slightly older brother. Once the family was in a jug, Derry needed a good toweling off to help ward off the cold. Derek had obviously learned to nurse, so we felt it prudent to get some colostrum into Derry to even the nutritional playing field. I milked a few ounces from Yippee and we then tube fed it to Derry. From that point there was no looking back for either of the lambs (and mom).

13 March 2014 – Yippee’s twins survived the night. Despite the fact that they were both seeming strong and healthy the temperature got down to 3°F (-16 °C). This morning it was just above freezing inside the barn! Those kind of conditions can be difficult for newborn lambs who have yet to get their internal thermostats calibrated. Both are nursing well and doing fine.

Yesterday, I forgot to preface the chronicles by pointing out that this is our 24th consecutive year of lambing. It is difficult to believe that we have been at it this long!

Now that lambing is officially started and ewes are officially due, no one else went into labor today!

14 March 2014 – Beginning my second night of 2 AM barn checks was difficult. This old body is having trouble making the transition to sleep deprived nights! The checks need to be done however and this early morning was proof. When I got to the barn, Astrid had delivered a big, strapping lad. For some reason he just had to be Dirk. They chose not to wait for any human assistance (which is as it should be!). Dirk was all cleaned up and having a good drink before he even got into the jug with Astrid. If all lambings would only be like this!

Unfortunately, Zoe had also decided to lamb when I arrived in the barn. We were concerned about her, as she had lost a lot of condition during the last month. She was due tomorrow, so her lambs were not premature, but they might just as well have been. Both were very small and very weak. Zoe was not able to get up without my assistance; once up she was obviously weak and shaky on her legs. In addition she was producing virtually no milk. Zoe survived the night, her two boys did not.

15 March 2014 – We are now waiting on four ewes who are due. They have chosen to delay their deliveries. We are hoping that they do not decide to deliver tonight. It is once again going to be very cold: 4°F (-15°C) overnight. Early last week we thought that perhaps we were shaking winter’s strong grip upon us. It managed to get above freezing for a couple of days and we actually experienced some melting. Now we are back into the freezer, for at least another day or so. It is tough on us and the flock. I will be very glad when it is over!

The first three lambs are doing very nicely however. All three are gaining significant weights so we have nothing to complain about in that regard. Derek and Derry got fitted for their lamb ear tags. Derry seemed especially proud of his and was not shy about showing it off. Introducing Derry! 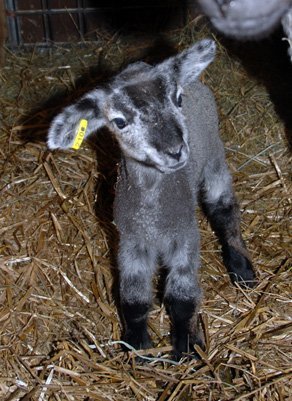 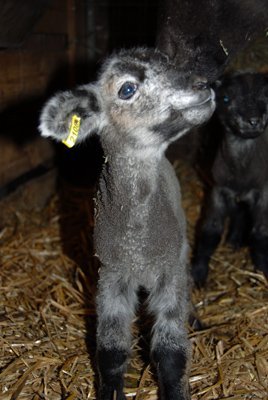 A lamb this cute is enough to warm any heart!