16 March 2014 – It is another unseasonably bitterly cold day today. The cold makes waiting for ewes to deliver just that much more uncomfortable for us and for the sheep. Woolamena monopolized the labor and deliver action for the day. We knew she was the next ewe due, but she spent the entire day curled up in the northwest corner of the barn without showing any signs of labor. I seemed to spend the entire day checking up on her. After I checked her at 4 PM I suspect she knew I was not returning until 5 PM chores. She then took advantage of my absence to deliver two lambs, a ewe and a ram. The two are quite small, a little over 5 pounds a piece. They were also not especially vigorous. So by the time we completed evening chores we decided to strip some milk from mom and tube feed each of the lambs, in order to give them a fighting chance tonight. We repeated the process at 9:30 PM since outside it is down to 5°F (-15°C) and only 34°F (1°C) in the barn. At least by that time the ewe lamb was up and walking, but the ram lamb struggles to get his feet under himself.

17 March 2014 – Woolamena’s two babes made it through the night. By 6 AM I saw the ewe lambing nursing. The ram lamb is shaky, but he is now standing and walking. Late last night I was not sure if they would make it. Weighing the two of them later in the day confirmed that both are now nursing. It is also slightly warmer today, which should help all concerned.

The weather takes its toll on all. This morning our oldest ram, Ulmer, was listless and not interested in food (which is highly unusual in these cold times). We had a number of possible causes, the most serious of which was urinary calculi (stones plugging his urinary tract). (Often when they are significantly cold the sheep will not drink as much water and therefor not flush their urinary system adequately.) We opted to seek veterinary help on this one. Our vet, Joel, helped eliminate the possibility of stones, but he felt that Ulmer’s rumen did not sound as active as it should. We are now treating that. At least by evening Ulmer seems a bit perkier, and was also eating.

Ulmer’s difficulties came up when we had no ewe in labor, which was a blessing. We finished St. Patrick’s Day without the opportunity to name a single lamb with a good Irish name.

18 March 2014 – Since bedtime last night Willetta had me convinced she was ready to deliver any minute. She was big enough that she resembled a beached whale. Like Woolamena yesterday, Willetta strung my barn checks out until 6 AM this morning when she had just delivered an average size ram lamb. Within a few minutes it was followed by another ram lamb, perhaps a bit bigger. As the day progressed it became apparent that the first lamb is a bit challenged; he is having trouble with the concept of nursing, which is a bit of frustration we do not need .

We are in the midst of a trend. All but one of the lambs born to date are rams! Statistically things do even out. Last spring we had an unusually high percentage of ewe lambs, so it seems the pendulum is just swinging back.

Ulmer is better today. We are hopeful that he is not seriously ill and is on the mend. It is sunny today and it is warmer in the barn, i.e. over 40°F (4°C). For that we are all very thankful! Now we just need the labor and delivery pace to quicken a bit!

19 March 2014 – Finally a little more lambing activity! After two earlier barn checks, Wanetta decided at 4:30 AM to get on with it. She had produced two ewe lambs and was well on her way to getting them cleaned up in preparation for moving into private quarters. Trips to and from the barn this morning were through heavy wet snow. The only consolation is that the temperature is tolerable.

While getting Wanetta settled, in we noticed that Willette’s dumb-cluck ram lamb had finally learned how to nurse! (This occurred only after two additional sessions of tube feeding.) Of course both boys insist on nursing on the same side. Perhaps when they drain that side they will discover the other spigot. (Later this afternoon we found that they have been nursing on both sides and both of their weight gains were prodigious. I guess they showed me!)

Before morning chores Annette delivered a single ewe lamb. Her performance was especially rewarding, since last year, with her first ever lambing, she had both a difficult time accepting the lamb and staying in her jug with it. This year she seems to have become an old pro. 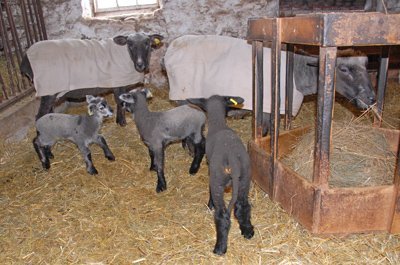 It is difficult to believe that today is the beginning of the second week of lambing. This afternoon Yippee and her two boys and Astrid with her boy were the first to move into a mixing pen. All of them were ready for larger quarters. And now we have two jugs freed up! The three lambs were immediately in heaven. They began racing around the big feeder. I am not sure if they have stopped yet. Derry did stop momentarily; he is already the photo personality star! 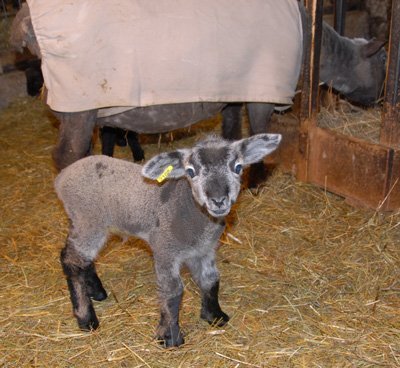