20 March 2014 – It is the first day of spring…at least according to the calendar! We had additional snow over night, which seems to be part of our regular routine. The snow just seemed to add to a long day of frustrations. At 2 AM I found a large, handsome ram lamb at one end of the barn. His mother turned out to be Brie, a first time mom, who was at the opposite end of the barn. I had to catch Brie to get her to join the lamb in a jug. It appeared that the lamb had been licked  clean and he definitely had learned to nurse. In the jug Brie would have nothing to do with the lamb. For the first time this year we had to resort to the stanchion to restrain a ewe. We hope that with the extra “incentive” we can re-attach initial bonds.

Around 6:30 AM another first timer, Bessie, delivered a good size ram lamb. The lamb was up quickly, mom was attentive and the lamb learned to nurse on his own. Bessie earned a gold star for her performance and with it some extra hay. She is a contrast to the contrary Brie.

A lull in birthing activity at least allowed me to blow the snow off the driveway and walkway to the barn. It is heavy and very wet. At least removing it to the mountain of snow to the north will limit the amount of run-off against the barn (i.e. if it ever melts!).

Once the snow removal was complete, another visit to the barn found that Æbleskive had delivered twin ewe lambs, one at the south end of the barn and one closer to the middle. Æbleskive was busy eating at the north end. Once again we had to chase a mom down and force her into a jug with her lambs. Since the stanchion was already in use with Brie, we set up a jug for Æbleskive with higher fencing. She showed no interest in the lambs but is ravenously hungry. She does not butt the lambs (as Brie was doing), but merely evades them if they try to nurse. Gretchen restrained her while I milked out a large amount of milk, which we used to tube feed the lambs. There was no bonding progress by bedtime, so we again repeated the milking/tubing process. At that point we called it quits, especially dispirited from a long, mostly frustrating and tiring day.

21 March 2014 – For some reason, perhaps fate, the alarm did not go off at 2 AM. I eventually awoke on my own, wondering when the alarm was going off, only to discover that it was 5:30 AM! A rapid trip to the barn revealed that Yvonne was peacefully taking excellent care of a lovely ewe lamb. Thank goodness for good mothers. It was also truly amazing how good 7 ½ hours of uninterrupted sleep felt.

I have been regularly working with Æbleskive and her lambs and slowly making some progress. I have managed to get both lambs hooked up and nursing, but only if I can keep mom occupied with food. (I am beginning to believe I am being blackmailed!) By noon I was able to repeat the process and then gradually remove myself from my restraining position. At that point Æbleskive surprised me by licking both of the lambs’ butts while they nursed (an important part of the bonding process).

At 8:15 PM Blossom was caring for a single ewe lamb in a seemingly veteran fashion (she is the last of this year’s first time moms).

Woolamena, Willette and Wanetta and all of their lambs have been integrated into the mixing pen today. It is starting to look like a very going concern. Most of the lambs are currently jet black and all the same size. As a result it is hard to tell everyone apart. It is an exhausting life, being a lamb in these circumstances. I can empathize with their fatigue. 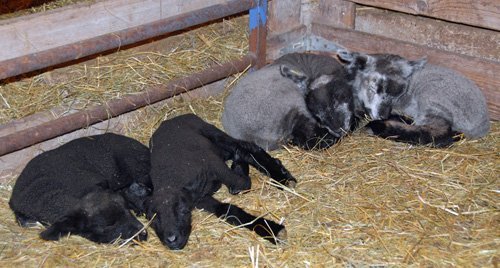 “Will you just turn out the lights and let us sleep!”

At 10:30 PM it is again snowing, but at least it is relatively warm. The best part of that late “bed check” awaited me as I descended the stairs into the barn. Æbleskive was contentedly standing in the middle of her jug letting both lambs happily nurse. I will happily trade a little more snow for that reward any day!

22 March 2014 – Blossom blew it this morning. She relinquished her “super first time mom award” by repeatedly jumping out of her jug this morning during and after chores. Our patience is short and we set up a high wall around her jug.

At least today was tolerable weather wise, i.e. sunny and not too cold. Unfortunately, the forecast for the next few days is again for abnormally cold weather. We are again backlogged with ewes who should be delivering lambs. Tonight is supposed to get down to 4°F (-16°C), with similar low temperatures for at least the next four nights. That should guarantee that we will have an abundance of deliveries in the wee hours of the morning!