23 March 2014  – Overnight, it did not (as originally predicted by the weather folks) get down to the 4°F (-16°C) range. It “only” got to 9°F (-13°C). However, as predicted on the last Ewe Turn, it did get cold enough to inspire all sorts of lamb deliveries during the dead of night. Having quite a number of ewes who looked as if they could lamb at anytime, we felt it prudent to do more frequent barn checks. It proved to be a good call. I expected Ysabel to go first. As is often true, I was wrong. When I arrived at 1 AM, I found Waffle with 2 good size ewe lambs, obviously very recently born. Darbie and Darcie had arrived*. We helped speed up the drying process and got them settle in a jug. My only concern was the apparent small milk supply that Waffle had to offer.

I returned 3 hours later, at 4:30 AM to find Yuliya with a very large ewe lamb just delivered. Within five minutes she delivered a second large ewe. Both lambs were immediately active and up learning to nurse. It is so nice to have a good mom with strong healthy lambs!

It was apparent by this time that Waffle’s two had not nursed sufficiently as they both were complaining loudly. Unable to milk sufficient amounts from Waffle, we opted to dip into our supply of frozen colostrum. Once we thawed and warmed the milk, we tube fed both of the lambs with healthy servings. By the time we had gotten Yuliya and her girls, Dippety and Dooda, settled and Waffle’s lambs fed the extra colostum, it was 5:40 AM and Ysabel decided to go into labor. We went back to the house to make a pot of coffee and warm up a bit.

By 6 AM Ysabel had delivered two very large ewe lambs, Dorte and Dagmar. They are the first white lambs for this year (and may be the only ones). It is ironic how so often sibling ewes deliver their lambs at nearly the same time. Ysabel and Yuliya are twins; their deliveries were separated by 90 minutes. Between the two they delivered over 46 pounds of lambs!

By the time we had everyone settled it was pointless to go back to bed. So we just started morning chores a bit early. The entire flock was quite happy with that decision. After a cold night a big breakfast was welcome. Considering the short amount of sleep that we had, it was actually a very smooth period of deliveries.

Having started chores early we decided to see what would happen if we released Brie from here stanchion. She surprised us by seemingly fully accepting her boy Dante. It was our reward for the day that was hardly begun. 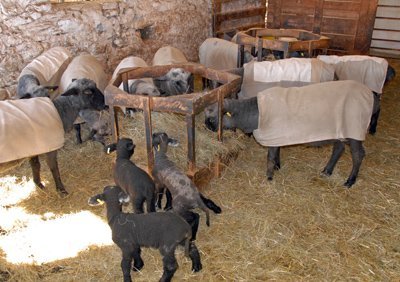 The mixing pen is growing: this afternoon six moms and ten lambs. It will not remain this small very long!

It warmed up a little this afternoon and we were blessed by not continuing a lambing marathon. Nonetheless, in late afternoon as we were weighing all the new lambs, Viva reminded us that lambing was not finished. Just as we were about to starting evening chores she delivered a ram lamb. We figured Viva was not finished, but we opted to move the two of them into a jug so that they would be out of harms way as we fed everyone else. Sure enough, as we were distributing hay to the main pen, Viva delivered a ewe lamb without assistance. Viva’s lambs, Devin and Diva, turned out to be the last for the day, for which we were extremely grateful.

It has been a long, productive day. Ten healthy lambs delivered. Nine of the ten were ewe lambs, who now are in the majority. It is again forecast to get down to 4°F (-16°C). By the feel of the air outside at 10 PM I think it will get there this time!

*Here is a sign that fatigue is effecting us.  The next day we were tagging and docking lambs. When we got to Waffle’s two ewes, one of them had morphed into a ram! Darcie became Daffy!

24 March 2014 – The temperature dropped to 5°F (-15°C) last night. Luckily we had no lambs born overnight. The entire day was relatively quiet. Zita was ever so cooperative and delivered a ewe lamb, Daphne, in the peace of the early afternoon. The lamb was the largest one to date: 14.6 pounds!

The day’s only other excitement occurred when we moved Æbleskive and her lambs into the mixing pen. Usually any ewe who has delivered lambs more than one year, will follow the lambs as I carry them from the jug to mixing pen. Æbleskive was different and veered off on her own to join the main flock and their meal. It took a lot of effort to get her into the mixing pen with her lambs. Once there everything returned to “normal”!

25 March 2014 – Not a single birth today. It was nice not having the extra work, yet it would also be nice if we just got on with the job! Yesterday we let Brie out of her stanchion to see if she was now bonded to her boy, Dante. We were pleasantly surprised to find that the two of them are seemingly now a cohesive family unit. The next step was moving the two of them into the mixing pen. That too went very well. Dante kept Brie busy wandering all over the pen with her in worried pursuit.


In an opposite vein,  Æbleskive and her two lambs are not staying in close contact in the same pen. Both lambs’ weight gains have slowed rapidly since the move. So we moved the three of them back into a jug. We will try moving them into the second mixing pen when we establish it in a few days, in the hope that a smaller initial population will be friendlier for their relationship. Regardless of how that turns out, we are extremely disappointed with Æbleskive.

26 March 2014 – Once again it was abnormally cold over night. I should have guessed that we would have more deliveries. Sometime around 3 AM Ariel delivered Dinsmore, a large (and quite cute) ram lamb. When I found them they were contentedly curled up together. Our only problem was convincing Ariel to move into a warmer and drier jug.

Xanadu was busy “talking” to her as yet unborn lamb while we worked with Ariel. Once we left the barn at 6 AM I was sure she would got right to work. We gave her an hour by herself. By 7 AM she was finished and busily cleaning up a large ram lamb, Duke. Two overnight deliveries with a minimum of stress is good for all of us!

Zinnia waited until evening chores to do the same routine as Xanadu’s. The entire time we were feeding everyone Zinnia spent wandering around and “talking” to anyone who would listen. We finished chores at 6 PM, turned out the lights to let her settle down. Upon our return at 6:45 PM she was in the final stages of delivering a huge ram lamb, Dagwood.

So now we are waiting on Allspice, the last pregnant ewe. Like the last three, she is well within her due date. With our luck she will keep us on alert for a couple of days at least. A full night’s sleep is still a dream for the future.