Friday, March 9th: Shortly after I published the last edition, Waffle decided that her time had arrived. At noon she had given us no indication of an imminent delivery. I was therefore a bit surprised, yet pleased, to find her at 1:15 PM with a very spunky colored ram lamb. Bagel was already up and investigating his new surroundings after having already had a good drink of mom’s colostrum. Waffle was having a bit of a time keeping up with the big (13.3 lb) guy. He had already managed to climb into and out of one of the adults five-sided feeders. Needless to say, the two of them continued to make this a very smooth lambing.

Last night, on our last barn check before retiring around 10:30 PM, everything seemed quiet. A little voice was telling me that I should not wait until 2 AM  to check on Zinnia. I ignored the voice. When I did get up at 2:00 AM we heard lots of baahing on the monitor. There were at least two different sheep having their say. Once I got to the barn I found Zinnia, quietly talking with a well cleaned, colored ewe lamb. Surprisingly she was getting all sorts of “help” from Nanoo Nanoo. Nanoo Nanoo has never tried to “granny” a lamb before this and she was making a royal pain of herself. Once I managed to get Zinnia and her lamb into a jug (without Nanoo Nanoo!) the barn started to become a more peaceful place. This is Zinnia’s first lamb. She initially seemed a bit confused by all the activity but gradually calmed down and devoted her attention to the lamb. The lamb had obviously been born much earlier (Zinnia had already passed her placenta). Since we had yet to see the lamb nurse we decided we should assure that it get some colostrum soon. Zinnia cooperated while I milked her (sometimes not always the case for a first timer). While I worked on the left side of the udder, Blossom took over the other side and decided to prove she was up to the nursing task herself. For this we said a quiet “Hurrah” and now have a small supply of excess colostrum in the freezer. Back to bed at 3:00 AM. 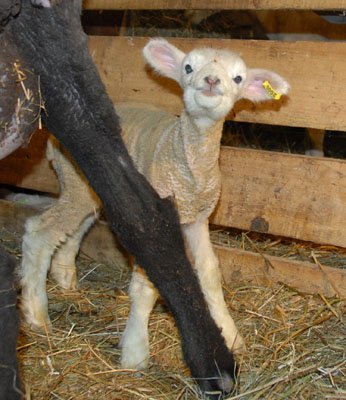 Buttons is growing well and hams it up for the camera

I forgot to mention that there are signs of spring around the farm. A warm spell hit us two days ago and melted nearly all of our lovely snow. Since then it has turned much colder. I suspect the colder weather did not set well with the influx of Robins that appeared yesterday. At the same time a Song Sparrow was hanging around the stone wall behind the barn. This morning a Cardinal was singing for the first time this year at the top of one of the big maples.

Saturday, March 10th: The barn was very quiet all night, which afforded us a bit more sleep. When I got to the barn at 6 AM Winifred was busy building nests and talking to her as yet unborn lamb. By 7:15 AM she completed her work , on her own. She delivered a 14.3 lb ram lamb. Beauregard learned to nurse on his own. We finished all of our chores in good time and had breakfast at nearly the normal time. 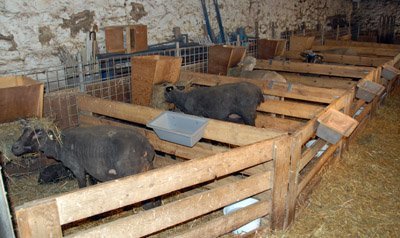 Unabelle was now the only ewe behind on the lambing schedule. She was acting very uncomfortable all morning. By 10:30 AM she had produced a single ram lamb almost as big as Winifred’s. And like Winifred’s lamb, Bellisimo was up quickly, learning to nurse independently. It should also be mentioned that Nanoo Nanoo again was trying to over-act the role of midwife.

As of this evening we are completely caught up on scheduled lambings. Tomorrow two are possible, with three more scheduled for Monday. I do not want to jinx anything , but I can say that this has been the smoothest beginning to lambing in a long, long while. It has also be the least intense. Some of that is attributable to the few number of ewes bred, and some is the result of a breeding pattern that, so far has distributed the lambings evenly over time. In past years we have often had as many ewes deliver in one day as we have had this year over six days. We are a little bit disappointed at the recent run of single lambs, but that can easily change.

All day today the wind has been blowing at nearly a gale out of the south. This evening it abated a good bit. By 10 PM it was calm enough that one could hear the roar of the waves on the beach at Whitefish Bay a half a mile away. It is a warm wind. It will be interesting to see if it blows some spring migrants this way by tomorrow morning.