Sunday, March 11th: I jinxed it! Yesterday I gushed about how smoothly lambing was going. Today we hit a speed bump.

The day started nicely. No early morning lambings. A wonderfully warm, sunny morning arrived, complete with the first pair of Eastern Bluebirds singing for all of us, just outside the barn as we did morning chores. It was almost frighteningly warm for this early in the year. Bulbs are popping up in the garden and there is a green tinge to the grass in the pastures. It feels strange doing chores in shirt sleeves!

Zita brought us back to reality in mid morning. She had been restless during morning chores and stopped eating very early. By mid-morning she slowly began progressing through labor. It became evident that she was delivering a very large lamb. Zita is a first-timer and not the largest of ewes. She eventually managed to deliver a white ewe lamb, with lots of effort, but without help. Once the lamb was delivered, Zita appeared shell shocked. She occasionally “talked” to the lamb, but otherwise showed virtually no interest in it. We eventually decided to catch her and forcibly place her in a jug with the lamb. Zita’s only concern at that point was getting out of the jug. We raised the height of the fence to the point that it was more like a stockade. She would calm down if I got into the pen, talked quietly with her, and gave her a soft massage. Under those conditions she even allowed the lamb to nurse (without interacting with it!). Leaving the two by themselves was much more chaotic.

We came very close to setting up our set of stanchions to restrain Zita. Every time we talked about it she seemed to calm down. For fear of the lamb not getting sufficient colostrum we decided to raid our frozen supply. The lamb’s first good drink, via a tube was compliments of Zinnia and Yuliya. And so it went throughout the afternoon and evening. Zita not showing much interest in the lamb, but permitting it to nurse every so often while Zita was eating. By bedtime we felt that they might be making some headway and therefore decided to leave Zita stachionless overnight.

It is amazing how physically and emotionally draining these type of situations can be. The quick alternative is to give up on Zita and just raised the lamb ourselves. There is a long term price for us if we did that: the hours spent bottle-feeding a bummer lamb and therefore having it underfoot for months is not worth the cost if we can help it. That recourse also would mean that we will have given up on Zita. By the end of the day we were still hoping to salvage the mother-daughter relationship.

The good news today, besides the warmth and sunshine, was that no other ewe decided to go into labor while we were dealing with Zita. If they had, they would have gotten less than stellar care from us. And before Zita went into labor we managed to get our first mixing pen set up and occupied. Yuliya, Viva and their four lambs had a grand time in their new quarters. The lambs have a big world to explore and new friends to meet. What a joy it is to watch them.

Monday, March 12th: Our first day this year with more than a single ewe delivering. Wendolyn had a small white ram, Byron and small black ewe, Bryn around 2 AM. Walnut followed at 7 AM with two colored ram lambs of better size, Beechnut and Butternut. Everyone cooperated and did the jobs they should (for which we are always thankful!)

The good news for the morning is that Zita’s lamb, Benita has gained significant weight (.6 lb) overnight. That means that she is getting to nurse. Zita seems a bit calmer this morning and perhaps a bit more indulgent in the lamb. 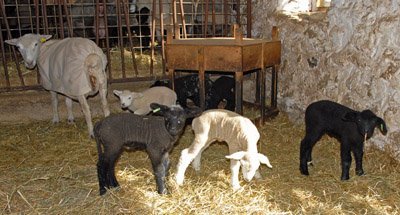 Lambs together for the first time

Waffle, Zinnia and their two lambs joined the mixing pen this morning. Zinnia’s Blossom drove her crazy because she would not stay close but insisted on joyfully running around the pen. Bagel was much more serious and stuck close to mom.

It rained most of the day. By early evening the sun broke through low in the west. The result was a spectacular rainbow which arched a full 180°. A nice way to end the day. 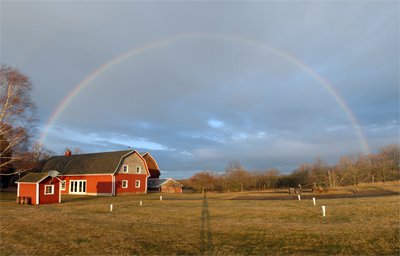