Friday, March 16th: Today began extremely poorly. Unabella’s lamb, Bellisimo, died overnight. He had been growing well, but had exhibited some respiratory difficulties, which we thought we had been treating. Nonetheless, his death was not anticipated. As would be expected, Unabella is distraught. She spent all day and into tonight calling for the lamb. It is a heart breaking scenario for her to experience and for us to have to watch. There is little way to comfort her besides frequent hugs. It is especially sad, because she is always such a devoted mother. From a medical standpoint, our big challenge now with Unabella is to slow down and dry up her milk production, which currently would be at or near full strength.

Wendolyn and her lambs, Bryn and Byron moved into the mixing group today. On the continuing good news side, Walnut seems to be doing well. Her udder feels soft and she is letting the lambs nurse on both sides. As such, we are hopeful that if her medical problem was related to mastitis, that we may have caught it soon enough for it not to be a permanent problem. If she continues this way, we should be able to move her and the lambs tomorrow.

No new lambs by the late night check. We are starting to look at a potential log jam: 5 ewes are currently due and an additional 6 for the weekend.

Saturday, March 17th: It was a busy early morning. At 2 AM we watched as Yvonne delivered her first lamb, a ram. She had done her homework and mastered all the birthing and postpartum talents she needed. In honor of the date, the lamb must be named Blarney. We had the two of them settled into a jug before 3:30 AM.

We deemed an extra half hour of sleep as warranted. Upon our 6:30 AM return, Willette had already delivered a ram lamb, who was up and learning to nurse upon our arrival. Willette also is a very good mother. We figure that the lamb needs to be called Bill. He is the first of the Rhett sired lambs this year. We are hoping that all of his lambs will reflect all of his good qualities, as there will regrettably be no more Rhett lambs after this year.

Unabella has finally quieted down this morning, but she still takes her rest lying next to the mixing pen.

Two additional lambings occurred this afternoon and evening. Whiskey had been acting very uncomfortable all afternoon and had definitely dropped by evening chore time. She decided to go into labor in the midst of feeding everyone. This is her second lambing. We were concerned about her for two reasons. First, last year she had difficulty initially bonding to her first lamb. She spent a short time stanchioned in a jug before she realized what was called for mothering wise. She then proved a devote mother. We always wonder if that scenario will repeat itself. Secondly, she has developed a very swollen/distended belly, which we hope is only edema. Her first lamb, a white ram, arrived in the middle of the barn and seemed to hit the ground running. Whiskey was having a second lamb and the first one was already all over the place (thereby disturbing everyone else’s meal). The second lamb was a less vigorous colored ewe. We caught the wandering ram lamb and brought him back to be with the second lamb and Whiskey. Whiskey was confused and we started to think “here we go again”! Number one would not sit tight; mom was disoriented. Eventually we placed both lambs into a jug and then forcefully caught Whiskey to get her into the same jug. Once into the jug and out of the general distracting chaos, Whiskey settled down and took up the task of cleaning and caring for the lambs. The lambs were having difficulty finding the nipples because of the extra swelling in front of it. We eventually miked out a good supply and tube fed the lambs. It was what everyone (especially Bud Light and Brandy) needed.

At 8 PM Vinca was in labor Between 8:45 and 9 PM she delivered two ram lambs, on her own. She managed to do everything else required, save for opening and closing the gate to her private jug. It was a calming contrast for the two of us.

Vanilla was acting very uncomfortable before and during Vinca’s delivery. We figured that the normal 2 AM barn check would be too late. We decided upon 2 ½ hours of sleep and a 1 AM barn check.

Sunday, March 18th: Lambing appears to gearing up.Our timing was just right. At 1 AM Vanilla had just finished delivering a colored ram and was obviously working on a second delivery. By 1:20 AM a colored ewe had arrived. Both lambs were very vigorous and up almost immediately. We got them all settled into a jug without problems. This “well oiled machinery” allowed us to get back to bed just after 2 AM! No one else looked to be ready for delivery and thus we settled upon a 6 AM wake-up.

Just when it looked like the lambing stampede had begun in full force, it has quieted down. The repeated disruption in normal routines plays havoc with the sheep, perhaps even more so than with us. At noon today nearly everyone was napping in the barn. 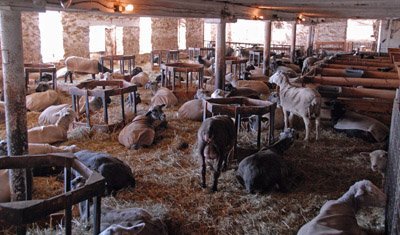 The few that were up were because of my arrival for the noon check. Others just slept through my presence. Tempest used Rhoda as a convenient pillow. 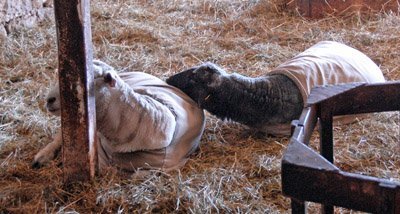 Even the lambs are bushed, as are these two sacked out behind Viva. (I think Viva would just as soon that the shepherd got the heck out of the barn!) 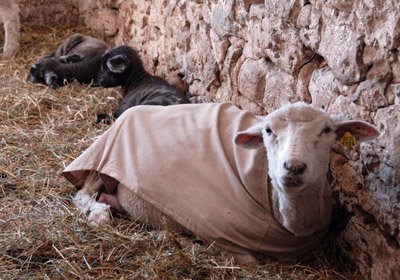