Monday, March 19th: Yesterday, around noon, the pace of lambing seemed to have slowed down, despite the fact that we still had a bucket of ewes who were due at any time. By mid-afternoon Warp managed to bring the barn back to reality. Over the space of a half an hour she delivered first a ram, then a ewe and then another ram lamb. Of all of our pregnant ewes we least expected Warp to be carrying triplets. Warp was not overly large, but perhaps she had been showing a bit of lethargy that I would not have expected with a single nor even twins. For triplets the lambs were all good size, ranging from 7 to 9.7 pounds. They all seemed vigorous and learned to nurse on their own. Warp has her work cut out for herself; we will hope that she is up to it, especially in terms of milk production. We will monitor the lambs’ growth closely in that regard.

Here we are today. Bippity, Boppity and Boo did well overnight. Warp obviously took good care of them. We re-weighed them first thing after morning chores. Each lamb gained well. Morning chores and our breakfast were also our last moment of respite.

Today the Labor and Delivery Department had an “OPEN” sign. For the first time this year it was “just like old times”. Over the next 12 hours we had five ewes deliver their lambs. Only two of the five deliveries were either normal and/or uneventful. The schedule began with Zoe, a first timer, who delivered a vigorous single ewe lamb while we were finishing our second cup of coffee. When we arrive the two had become totally separated. Prior to separation, Zoe had gotten the lamb pretty well cleaned up, so there had been some bonding going on. Unfortunately we had to chase Zoe down to get her into a jug with the lamb. That process disrupted whatever had existed of their initial relationship. We had to put up the higher panel to keep Zoe in the jug. She would only let the lamb nurse if we mildly restrained Zoe. The lamb did not help: she was full of energy and quite tall. She tend to search for nipples at a level at least 6 inches above their location. By 2 PM Zoe had passed her placenta and was a bit more settled. At least there were no signs of hostile aggression toward the lamb. We kept an eye on the two as the afternoon progressed.

By 3 PM Yoko demanded we shift attention her way. She seemed to be playing out the same scenario that Zoe had just performed, with the exception that we were there for the entire time. It was easier to get Yoko into the jug with her ram lamb. Once there she too did not seem completely committed to motherhood. She too ended up with a higher panel on her jug. By 4:30 PM the two of them seemed to be doing pretty well. By then we had tagging and docking chores to preform along with hoof trimming and jackets for Yvonne and Willette. In the midst of that operation Winola decided it was her time. She rapidly delivered a ram and a ewe, both while she was still standing. We were able to get the lambs with their heads out from under their bodies and Winola managed most of the rest for us. It was a pleasant return to normality.

All of the extra activity meant that we were running about an hour behind normal evening feeding schedule. As might be expected almost the entire flock was upset with the perceived lack of service. We managed to get everyone fed and nearly everyone calmed down by 7 PM. Yoko however was not cooperating. She had taken to butting her lamb. Our patience was overstressed. The net result is that we dusted off our stanchions and introduced Yoko to them. She was not a happy camper, but at least her lamb had a chance to nurse. Zoe perhaps had noticed our displeasure with Yoko. By this time she and her lamb had become good chums! 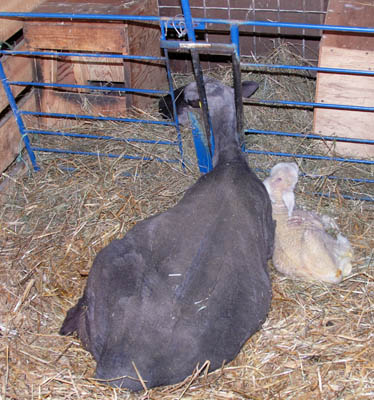 Yoko and her boy

As we ended chores we noticed that both Ultima and Wanetta were not eating. We knew that they were the last two on the “overdue” list, so we managed to get in a dinner for ourselves, knowing that we were going to be returning to the barn later. By 8 PM Ultima had broken some water bags and was doing a lot of talking. We gave her some quiet and returned in a half an hour. Her progress had slowed by then. At 9 PM we decided that we needed to intervene. However, Wanetta stepped up in the middle of this to deliver a huge single ram lamb. As soon as we could we got those two into a jug hoping and knowing that Wanette could look after the lamb without us. We again turned our attention to Ultima. When we examined her we found a large lamb presented backward in the birth canal. Ultima was not having any contractions which made delivery more difficult. We eventually were able to extract a huge ewe lamb, which sadly, was dead. Based upon Ultima’s size (extra huge) we speculated that she had at least another lamb. This time we located two front feet for a very large lamb, but no head. Based upon size, malpresentation, no contractions from Ultima and the long amount of time that had already passed, we put in a call to our large animal vets. Joel got here quickly. After some difficulty he eventuall found the head, got it turned forward and then pulled the lamb. Our initial reaction was that it too was dead. We managed to eventually get some signs of life and eventually got the big guy breathing. By 10:30 PM we got the two of them into a jug. The lamb probably will not be able to place weight on his front legs for a time, due to the force of pulling on them. We opted to thaw some saved colostrum and tube fed him. We finally got to bed after 11 PM.

Tuesday, March 20th: It is officially the first day of spring. It is hard to recall ever having it this warm for such a long time this early. Last night we could hear spring peepers in the wetland around us. The grass is now growing seriously!

Ultima and her boy survived the night. We have started her on a course of antibiotics because we were messing around inside her so much. We could tell this morning that she was tired and sore so she got a shot of banamine this morning. That seemed to help. As expected the lamb cannot yet get his front legs under him. We have helped him with nursing. He at least is moving around well on his front knees.

With yesterday’s activity we got well past the halfway mark of lambing. Beginning our third week of lambing today, we have now had 21 ewes deliver 33 lambs. We have 11 more ewes to go. On paper they should be pretty evenly spread out over the next 10 days. The lamb crop remains heavily weighted on the ram side. We have had 21 ram lambs versus only 12 ewe lambs! We set up our second mixing pen last night knowing that we were going to need to free up lambing jugs. It is hard to believe that we will be starting to do our 15 day weights this afternoon with Buttons and Bunny. 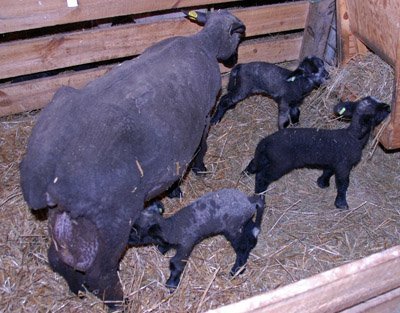 Warp with her triplets

Here is Warp and her gang. Boppity is getting a drink, while Bippity (top) and Boo are already sampling the hay!

It looks like everyone has opted for a good night’s sleep. It is nearly bedtime and the day has yet to produce any new lambs.