Wednesday, March 21st: Today was a quiet, peaceful day, punctuated by no new arrivals in the barn. It was nice to be able to catch up on both barn/lamb tasks and also things not sheep related. Sadly there was not enough day to be able to totally enjoy the record high temperatures and bright sunshine. I felt especially sad for the flock looking out on the pastures becoming so green. Even if they were not in the middle of lambing, it is a time to hold them off pasture. Grazing the new growth at this early, short stage will only stunt the year’s forage growth.

There were all sorts of little challenges today. Whiskey’s lambs had not been milking out the left half of her udder, contesting the right nipple and therefore letting the left side get over-filled. At a certain point that side becomes uncomfortable and Whiskey will not let them try to nurse the left side, even if they wish. Last night we spent some time milking out the left side. Whiskey was cooperative and provided over 2 cups of milk. This morning Brandy and Bud Light are nursing both sides! Hopefully the problem is solved and we will be able to move them into a mixing pen very soon.

Vinca’s second lamb, Bruno, had what appeared to be a slightly injured right rear hip (often due to a delivery problem and a situation that soon rights itself). Unfortunately he suddenly got worse the other night and seemed to have mobility problems with both back legs. We honestly did not expect to find him alive the next morning. We tried giving him a small shot of cortisone before bedtime. Amazingly he was much improved this morning. We are now quite hopeful for him.

Warp’s first triplet, Bippity has developed raspy breathing (probably due to fluid intake at birth). We are treating the problem like we would pneumonia. Time will tell on his progress.

Today we removed the last high panel in front of Zoe’s jug. She and her girl, Brie, are doing so well together that we now have Zoe in a jacket. The two of them will be moving to a mixing pen very soon. For that everyone is very happy.

We are not yet sure about Yoko’s relationship with her boy Brewster. She is still in the stanchion. We do not wish to remove it too soon.

In case one may wonder what we do to keep busy the rest of the day, I thought I would offer a brief summary of our usual chores. Here is a “normal” day during lambing, starting at midnight. At 2 AM I do a barn check, which, if nothing new is going on, will be followed by a 6 AM check. Assuming no new lambs at that time, the two of us will have a snack and a cup of coffee and then return to the barn for morning chores. The ewes with lambs get a serving of grain and then every one gets their morning hay (a total of seven bales to haul down from the mow). Water buckets are cleaned and refilled. Jugs are re-bedded with straw. We can then get some breakfast. With luck we may also manage a shower and get to check e-mail and the weather forecast. Mid-morning will require at least another barn check. The mixing pens will be eating so much hay that they will get their feeders topped off and more water in their buckets. Throughout the day there will be barn checks at least every hour or two (more frequently if we suspect someone is going into labor). Assuming no lambings are occurring, we will schedule an hour or more before 5 PM for “lamb chores”. Lambs who were born more than 24 hours previous get their ear tags. The decision is made at this time whether or not to castrate the ram lambs. This is done by applying a rubber ring. The same type of ring is then used on the lamb’s tail (docking). We weigh each of the lambs as follows: everyday from age 1 to 4 days, then at 8, 15, 30, 60 and 90 days. If we notice poor gains we may continue daily weighings for that individual. The day after the lambs are tagged and docked, if all is going well with mom, she receives a jacket and has her hooves trimmed. If the lambs adjust well to their mom in a coat and mom is also doing well, the family usually moves to a mixing pen the next day. It is now (hopefully) about 5 PM and time for feeding. The morning routine is repeated, except that the pregnant and open ewes, plus the rams get various rations of grain. Then, if we are lucky, we will get some dinner (usually a meal that Gretchen has frozen ahead of lambing). If things are quiet we may watch some ice hockey (we are just about into the Stanley Cup Tournament!). Between periods in the hockey game I will do barn checks. At the 10 PM check, the mixing pens will get more hay if they have finished everything. We may also top off the jug feeders, if they are nearing empty. Everyone’s water supply is topped up. We wish everyone a good night and promise to start the routine all over at 2 AM the next morning. In the gaps in between all of these events we may experience lambings or even manage to get something else (weaving, knitting, fleece processing, laundry and naps).

Thursday, March 22nd: Today literally began with a bang. At 6 AM I headed for the barn. Just after I got there it began to rain (hurrah!). I discovered that Whatsits had a white ram lamb and colored ewe lamb nicely cleaned up. As I assessed the situation the rain intensified outside. Just as I picked up the two lambs to move them into a jug a bolt of lightning hit close enough to the east that there was no time interval for the following thunder. Each and everyone of us, human and ovine, were scared out of our skins! Whatsits did follow me and the lambs into the jug. We got them settled in with feed and water and decided to give everyone a chance to relax a bit. By the time we headed to the house, the rain had stopped: a welcome .1″ of moisture (but much more is needed).

Yesterday set all sorts of temperature records here. I had to chuckle listening to the synthetic voices on my weather radio. Overnight we had a “significant” cold front move through dropping the temperature 15°, but the highs for today will still be at least 10° to 15° above seasonal normals, even though it is “much colder”.

Whatsits got us upset at morning chores. She seemed to be rejecting both her lambs; she barely let them nurse, even if we restrained her! We took deep breaths, utter unprintable phrases and headed for breakfast. By 10:30 AM Whatsits was happily letting both lambs nurse. Was it the fright of the earlier lightning strike?

This afternoon we expanded the second mixing pen. Vinca’s ram Bruno is so much better that Vinca and her boys moved into the mixing pen. Zoe and Brie also moved in with them. Zoe was initially upset, but has quickly settled into the communal environment.

When life is not too hectic in the barn it is also time to socialize with the “retired” girls. It is a time they also seem to enjoy, just standing close and getting some extra love and attention 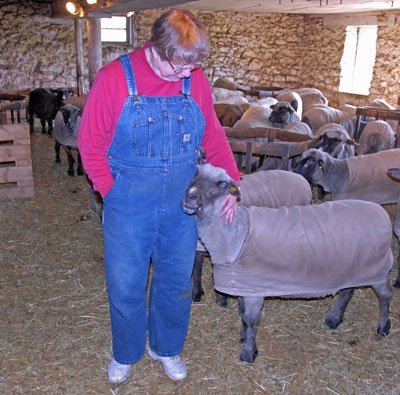 Odessa and Gretchen having a quiet moment

Friday, March 23rd: This seems to be a year in which the vast majority of the lambs are born in the very early hours of the morning. I found Tilberta with a large ram lamb at 2 AM. They had their act together. Getting them settled into a jug was no problem. We are back to bed before 3 AM.

Whiskey and her lambs moved into the mixing pen this morning. The lambs seemed to have figured out that there is good milk on both sides of her udder. This evening Warp and the triplets joined the second mixing pen. We are always leery of placing such a large family group into the mixing pens. It is so easy for one or more of the triplets to get “lost” in the crowd and get an even smaller percentage of the milk. It was, however, definitely time for Warp to move. We could tell that the confining space of the jug was causing her to eat less than we would like.

Yoko and Brewster are still not giving us strong clues that their relationship has gotten closer. Today was Yoko’s 4th day in the stanchions. We decided to let her out. She is not overly aggressive toward Brewster, but she is not yet a loving mother. We have enough jug space that they will have to spend more time together by themselves.