Gradually we seem to be recovering from our internet problems. I can at least now make posts to the Ewe Turn from home. (It does mean that I do not get to go out for a cup of coffee!)  At least we can (as of yesterday afternoon, March 28th) send and receive emails. I  lost all drafts for future blog entries. I am trying to remember, as best I can, what I wrote at the time. I will try to get them posted when I can. Hopefully the Ewe Turn will soon be back up to snuff! Thanks to all of you for your interest in the recent postings to the blog. Thank you also for your patience!

Saturday, March 24th: Today was not particularly pleasant. Yesterday, we noticed that Zita’s lamb, Benita, was doing poorly. She is spending most of her time lying down and breathing heavily. We figure that she either has pneumonia which we have been trying to treat. The other alternative problem may be white muscle disease (a selenium and/or vitamin E deficiency). Last night we gave her a shot designed to boost the selenium and vitamin E. Unfortunately that treatment is more as a preventative rather than a cure. This morning Benita seems to be slowly shutting down.

Whatsits’ ram lamb is now showing symptoms similar to Benita’s, just not as severe. We started him on treatment for pneumonia. He has lost weight overnight. We therefore tube feed him some of the extra milk that we got from Whiskey a couple of days ago.

The day at least had a brighter note. This evening at 8:45 PM, Umeka delivered two very vigorous black ewe lambs. The first lamb learned to nurse before we could even get the three of them into a jug. 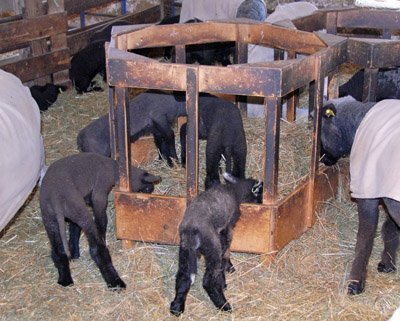 Sunday, March 25th: At my 2 AM visit to the barn I was greeted by total chaos. Two ewes had recently lambed and all of the remaining ewes in the main pen were up and wired. Weft had managed to deliver a white ewe and colored ram near the back north wall, an area relatively protected form the general anarchy. Both lambs were well cleaned up and appeared to have already learned to nurse. It was a relatively easy task to get them into a jug. Ysabel, on the other hand, was in the middle of the barn making a terrible fuss about two ram lambs she had just delivered, neither of whom were staying put. Trying to collect her two lambs and get the family into a jug resulted in a general stampede. Luckily the lambs were not injured and we did eventually get them settled in a jug.

After we got everyone settled in the jugs and the main pen, we were able to check the mixing pens. As we feared, we found that Benita had died. (Since this is the second death due to similar symptoms we will have our vets perform a necropsy so that we can possibly treat the problem more effectively.) Zita is now very upset about Benita’s absence. It is especially hard when we consider how close they had become considering their shaky beginning.

Weft’s little ram is looking better. By this evening he had started to gain weight again.

Monday, March 26th: Today marks the beginning of the third week of lambing. This morning we still have six pregnant ewes. Today we set up the third and final mixing pen. Tilberta and Bert were the first residents. We then “bit the bullet” and moved Yoko and Brewster in with them. Theirs is a strange relationship. Brewster seems to only be able to nurse when Yoko is eating. At any other time she hops away from her boy. Somehow he manages to grow. Nonetheless, they always sleep close together. It will be interesting to see if these conditions continue once they are mixed in with more and more ewes and lambs.

By this afternoon Weft’s ram lamb has lost weight. He has diarrhea and is breathing heavily. Damn! here we go again. We took Benita’s body to the vets today. This afternoon Paul phoned with the initial necropsy results. She had acute pneumonia. At least we appear to have been treating for the correct problem. He is doing bacterial cultures and also sending samples to the Wisconsin State Veterinary Lab for further work. Hopefully this will tell us if we have a drug resistant bug that needs a different treatment.

It is going to be a long night! At 8:30 PM Wobyn quietly delivered a large, white ewe lamb. We commented  on how pleasant it was when things went well. Wobyn corrected us on that point. At 10 PM while making what we thought was a final barn check, Wobyn decided to deliver a second lamb, this time a ram. The delivery was backwards, which is probably the cause of the delay, but it went smoothly.

Uhlayla was building nests in the back of the barn as we dealt with Wobyn’s second lamb. Gretchen went for some much needed sleep. I opted to stay up to watch over Uhlayla. At 10:45 PM she delivered a large ram lamb. Ever so slowly she produced a second ram lamb by 11:15 PM. At least both lambs were vigorous and trying to nurse before they got into the jug.

At midnight, with no other ewes looking like labor was imminent, we opted to set the alarm for 6 AM.