5 April, Friday – Sometime soon we will embark on our “second” lambing of the year. Due to the unscheduled (and unsanctioned) visit with the ewes by the rams late last fall, we have been looking for possibly pregnant ewes. Early on we identified three candidates: Umlaut, Vixie and Vespera. Three days ago it became obvious that Quazar also was part of the group. This evening, swollen teats told us that Vespa was also in the mix.

Our Corriedale ewes tend to run a full gestation at 148 days, but can, on occasion wait as long as 154 days. Tomorrow marks the 148th day. It almost seems as if someone hit the replay button on us. After enjoying a few days of sunshine and “relatively” warm days, the forecast for the next week or more sounds more like it did when we were getting ready to begin lambing in early March: colder temperatures, damp northeast winds blowing off of Lake Michigan and snow. That type of outlook will make early morning barn checks much less pleasant. It is difficult to believe that at this stage of lambing at night we are usually hearing frog calls from the wetlands that surround us! Not this year!

6 April, Saturday – All of the lambing jugs were empty this morning, as we move Ariel and Chuck into the third mixing pen. The vacancy did not last too long. Vespa decided to go into labor during morning chores. She delivered a large white ram lamb. Thankfully it is a single, because one of the reasons that we did not spot Vespa’s pregnancy earlier was her lack of substance in her udder. Milk production is definitely going to be a problem.

By this afternoon the entire barn was in a very “pissy” mood: lots of head butting and running around, plus lots of complaints about the lack of food. In all this Vixie was the only one lying down, giving us hope that she too would go into labor. This hope was destroyed when we fed everyone an additional extra breakfast at noon and Vixie got up to join in the eating festivity. The food consumption for the flock has gone up substantially over the last couple of days. The grumpy behavior I can only ascribe to lack of sleep and the dreary, rainy, snowy weather for today.

7 April, Sunday – Vixie continued to toy with us early this morning at 2 AM, building nests and acting uncomfortable. At 6AM we found her with two ram lambs who were up, cleaned and learning to nurse. Thankfully, Vixie seemingly has a sufficient milk supply. Having milk is one of the major concerns we have with these unplanned pregnancies. One of the reasons we did not try to breed some of these ewes is that we know that when they had their last sets of lambs that they experienced some problems with milk production, in most cases due to mastitis.

In that vein, Umeka may have some mastitis problems this afternoon. A swollen right nipple and right side of her udder. She is now 18 days postpartum, and her lamb, Conchita has been growing well. We attempted to milk out as much of the side as we could, but Umeka was clearly in discomfort and made the milking effort difficult. We will test her milk and depending upon the results begin a course of medication.

Vixie proved to be the only ewe to deliver on day 149. Three to go….

8 April, Monday – Today was Umlaut’s day. Early this morning she delivered a white ewe and a colored ram. They were well cared for and had already nursed, which makes it difficult to know how Umlaut’s milk supply stands. At morning chores we weighed the two lambs so that we had a benchmark for gains by tonight. (By evening chores they had both gained weight; obviously mom has milk available!)  Looking at Umlaut’s lambs and her family line this is one of the ewe cases that we can be pretty sure about the father. Ukiah is the only sire who would have produced a white lamb with Umlaut. If he is the father of the ram lamb is another question.

Vespera was not eating breakfast and visiting every corner of the barn. by 9:45 AM she had some discharge. At 11:15 AM she was in active labor and quickly produced a ewe lamb without assistance. She seemed a bit confused by the ordeal, but that is understandable, considering that she is a five year old ewe who has never had a lamb.

9 April, Tuesday – At 2 AM just about everyone in the barn was asleep. However, I found Quazar, standing outside Umlaut’s jug, quietly watching the lambs. I was hopeful that it was a good sign. It was not, as she spent the rest of the day sleeping and eating.

10 April, Wednesday – After a day of constant rain yesterday, it was a miserable night. At 2 AM Mother Nature could not decide between snow or ice pellets. In her indecision she gave us a few inches of both. It is a miserable mess!

Quazar’s udder and vulva are getting pinker, but still no lamb(s) this morning.

Day 152 and still waiting for Quazar.

11 April, Thursday – The cold, damp, gloomy weather continues, with more snow, freezing rain and sleet in the forecast. The spring bird migrants, especially the insectivores are having a tough time. This morning we felt especially sorry for an Eastern Phoebe perched in one of the cedars next to the house, unsuccessfully searching for insects.

Quazar still was showing no signs of lambing this morning. I spent a lot of time watching her, trying to detect any fetal movements, but I saw nothing. We were worried enough to discuss her case with one of our vets. We decided that if she showed no signs of lambing by evening chores we would start the process of inducing labor, knowing that can take up to 2 days.

Guess who must have been listening in on our phone lines? When we came down to the barn at 4:30 PM to weigh lambs and get ready for chores, Quazar was just finishing the delivery of one of the largest lambs we have ever had. He was having a little trouble breathing, but between us and Quazar we got the lad going. This image is of the two of them about 10 minutes after birth. 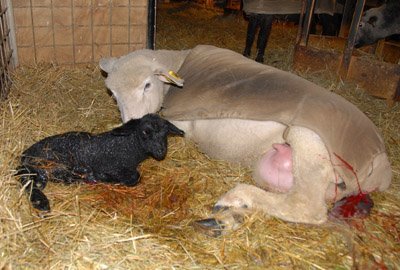 Once we got the two of them into a jug, clipped and dipped his navel and made sure Quazar had milk, we got her out of her jacket. By then the lamb was up and ready to nurse. Once he started it was as if he made up for the last few days when he should have been nursing. We are guessing he may top 20 pounds! Also not bad for an “old lady” of nine years! 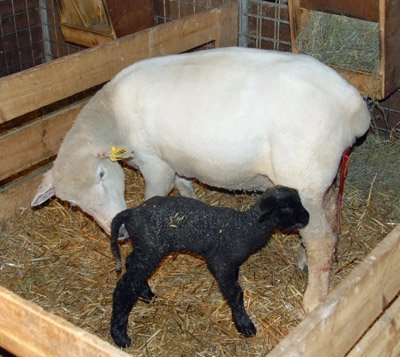 With that, lambing for 2013 is over for us. We thought of going out for dinner tonight to celebrate, but the raging ice storm put those thoughts to rest quickly. We at least get to sleep through the night.