Today, the 18th of March, marks the eighth day that the ewes at Whitefish Bay Farm have been lambing. So far life has been going very well for all concerned: sheep, lambs and shepherds. Appropriately, our first lamb, Winter, was delivered by Spring a day ahead of schedule while the weather was still unseasonably cold and wintry. The remaining ewes decided to wait a couple of days and begin in earnest on Friday. It was as if the ewes knew that spring weather was on its way.

On Friday, when the next six lambs arrived, the temperatures moderated. Warmer winds out of the south pushed the first Eastern Bluebirds back to the farm just after sunrise. What a joyful sound their calls were to start the day. By the beginning of the new week temperatures continued to climb. Yesterday afternoon it climbed above 60° F (15°C). With each surge of warmer air came new bird arrivals. An Eastern Phoebe greeted us outside the barn on Saturday morning, along with the first two Eastern Meadowlarks singing from the top of the large ash tree just south of the barn. Waves of Robins, Redwings and Common Grackles have since filled the air. Later, we heard our first Sandhill Cranes bugling overhead. By Sunday evening the winds had calmed completely. On the way to the barn for evening chores we heard a mature Bald Eagle flying directly above us before we saw it. It was so close that we could hear the soft beat of its wings as it flew over. It was warm enough last night that we almost felt that we might hear the first Spring Peepers. Wishful thinking on our part, but it will come soon….

To date, twenty ewes have delivered thirty one lambs. Overall there have been more ewe than ram lambs. We have been a little disappointed that the number of white ewe lambs has been low, as we are hoping to increase the number of new white ewes in the flock this year as we have some vacancies to fill. We are still in the early stages of lambing however, and there is a good chance that the percentages will even out. The two of us are holding up well. The lambing pace has been steady, but there have yet to be times where new arrivals threaten to overwhelm us. It has also helped that we have had all normal deliveries, none of which have required assistance on our part. Add to that the fact that every lamb so far has been healthy and robust. Only one ewe, Tiara, has been slow to come into milk and we have as a result had to supplement here twins, Winn and Wynne, for a couple of days. Now, four days after lambing she seems to be taking over the full support of her lambs. Another sign that things are going well for us is that so far we have managed to name all but the last three lambs. It is a sure indication that we are starting to tire when we get behind on names. 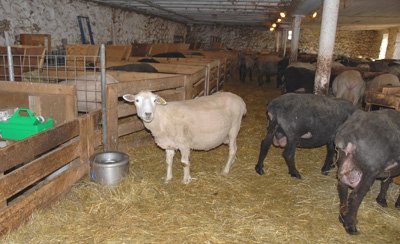 We have not been able to stray away from the farm as the snow melts and signs of spring are everywhere. Our “outdoor” experience currently consists of the 50 paces between the house and barn and back. So far it is a pleasant walk.  So it is down to another three weeks, if the last ewe scheduled is pregnant and if she delivers when scheduled. That’s it for now from Wingding, Winkie, Wilfred and Wilfreda, Whitney and Whoopie, Whiskey and all the rest.