It had been my hope to post an update to the Ewe Turn about once a week throughout the four plus weeks of lambing. I managed to attain that goal just once. The second and third weeks have already passed and we are working feverishly to make it into the heart of the fourth week. At least the pace has slackened and I can bring the Ewe Turn up to date.

The first week went so well and the weather that accompanied it was so beautiful, one had a foreboding that it all could not last. Mother Nature definitely came through in that regard. The weather turned colder and produced a series of snow storms and cold, wet east winds off Lake Michigan. It was not pleasant for sheep and shepherds alike. While the temperatures have moderated recently, it still does not qualify as spring. 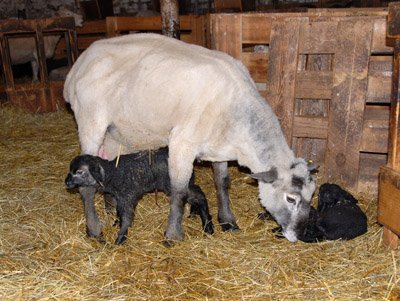 QT with her twin boys, about 10 minutes old

Unlike the first week in which we experienced numerous robust healthy lambs and no labor and delivery problem, the next two weeks threw a bit of everything at us, good and bad. We had 2 lambs that were still born, 1 that died at birth because the ewe did not clean its face quickly enough (and we happened not to be with her at 3AM), and 1 born with major birth defects which resulted in his death. One ewe had a uterine prolapse. We and our vet managed to save her and her lamb. Another ewe that had triplets last year had only a single this year. That lamb is dumb as a log and did not/has not learned to nurse from mom. We have struggled to teach her to nurse and continue to supplement her. At 2 AM a first time mom had left one of her new born lambs in a corner and followed the other to a different location, eventually forgetting about the first. When we found the first lamb it was ice cold and barely breathing. We managed to get her warmed up and fed, but mom rejected her. After a week in stanchions where the lamb could nurse, mom finally found “religion”. At least it is now a happy family. We have lost a ewe to pregnancy toxemia and have another ewe (who we did not breed) come down with salt toxicity. Most of these problems we have experience over the course of 19 years of lambing. The salt toxicity is a new one for us.

On the positive side we have lots of healthy, vigorous lambs who are growing rapidly. One realizes how the time has passed when you see that the early lambs are already loosing their tails. We have already started our 4th mixing pen. The first three pens are already combined, allowing the lamb races to begin in earnest (more on the races next time!). 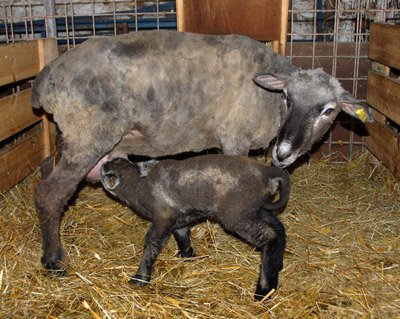 Toodles with her lamb, Wuddle

As of this morning we have had 105 lambs born. The last four pregnant ewes are due to deliver sometime in the next 8 or so days. The pace has been frantic enough that I have yet had time to figure out how many ewe and ram lambs we have and how many of each are colored or white. I do sense that we have achieved our goal of producing quite a few white ewe lambs and that we will also have a good choice to make between our colored ewe lambs. 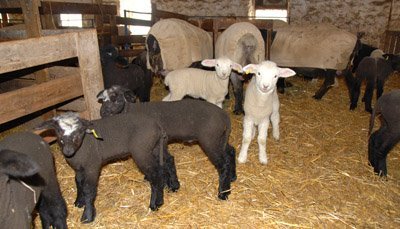 Lambs in the 1st mixing pen

The two of us are a bit “punchy”. It has been 4 weeks since we started getting up at 2 AM every morning. We look forward to sleeping 8 hours straight. I knew I was in trouble a couple of mornings ago when I was shredding lettuce to feed to the chickens and realized that I was systematically dropping the lettuce into my coffee cup rather than the plastic container I use for the chickens. Then again their eggs may turn out to be laced with caffeine….