Like much of the Midwest we are experiencing large amounts of rain this spring. Coupled with the earlier heavy snow melt, our streams have been running high much longer than normal and much of our ground is saturated. In Door County we are at least lucky enough to not experience the tremendous amounts of flooding which have been occurring along the Mississippi and Missouri River drainage area. On the other hand, Lake Michigan is about to reach its all-time high level. At Whitefish Bay Farm we have not been able to yet get all of our vegetables planted for the year. Grazing for the sheep has been limited either by steady rains or saturated pastures.

The heavy snows and ice that we experienced last winter caused a lot of damage to the gutters on the barn, especially on the east side. We were not getting water to properly drain away from the barn foundation, which has resulted in excessive amounts of water seeping into the barn. We managed to schedule our gutter contractor to replace both gutters this month. The crew managed to get here in a momentary dry spell last week. In the space of one day the old gutters came down and new gutters were created and installed. The gutters on the west side of the barn were the first to go up. 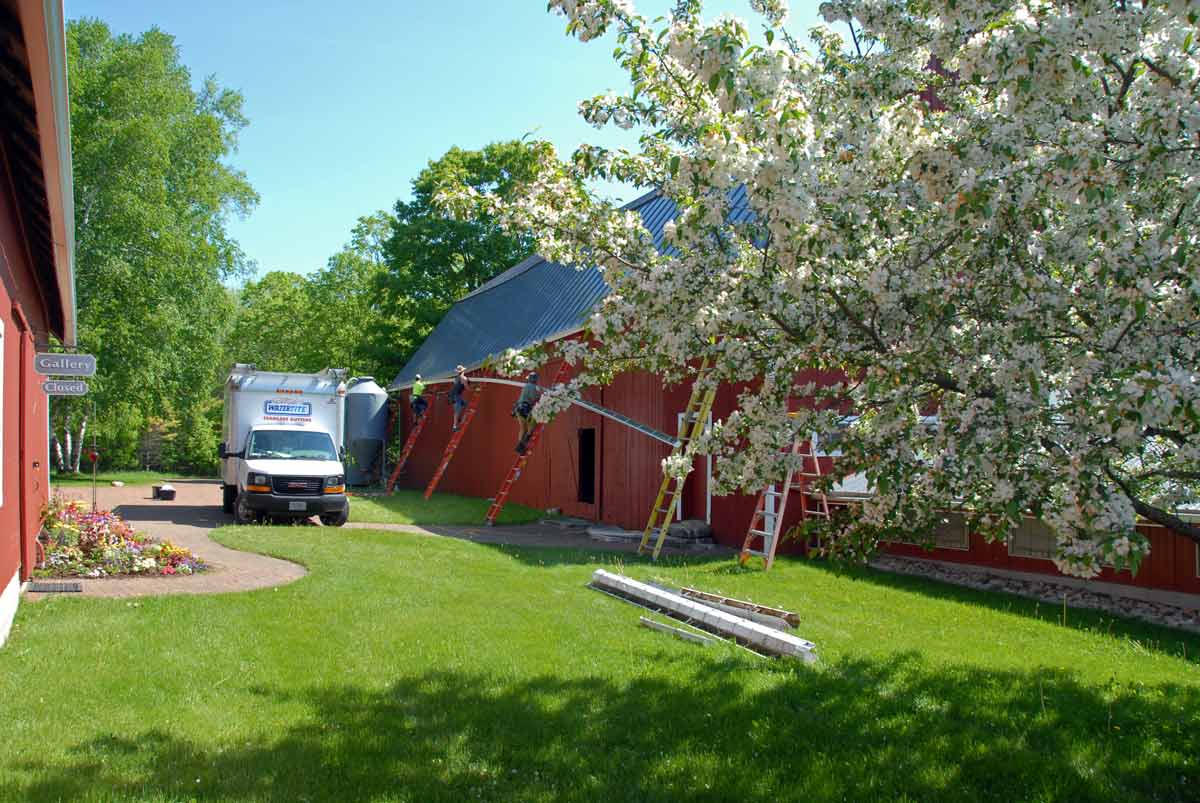 As can be seen in this first image, our flowering crab-apple trees were in full bloom. As with just about every other plant, the trees bloomed at least two weeks late this year. By noon the first gutter was just about installed. 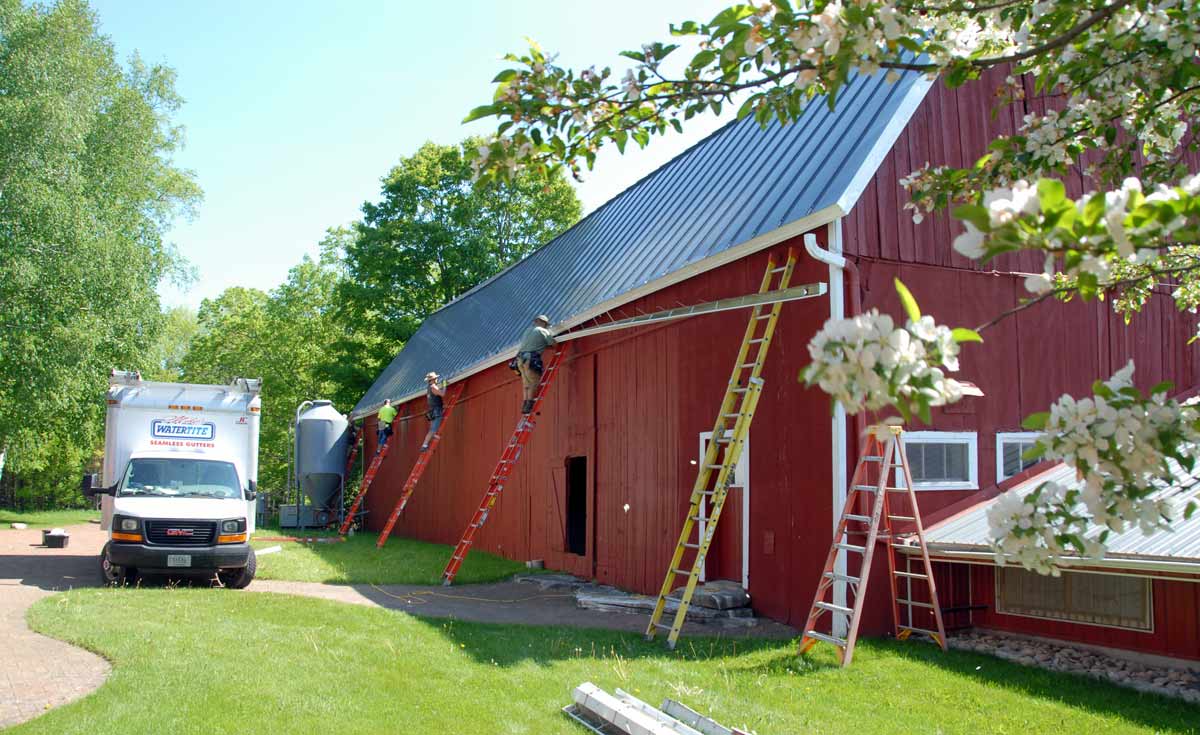 Installing the gutter on the east side of the barn is a much more daunting task. Since the barn is built into the hillside. the elevation to the roof drip line on this side is more than double that found on the west side. This is a job for folks who are not bothered by heights and climbing long ladders. 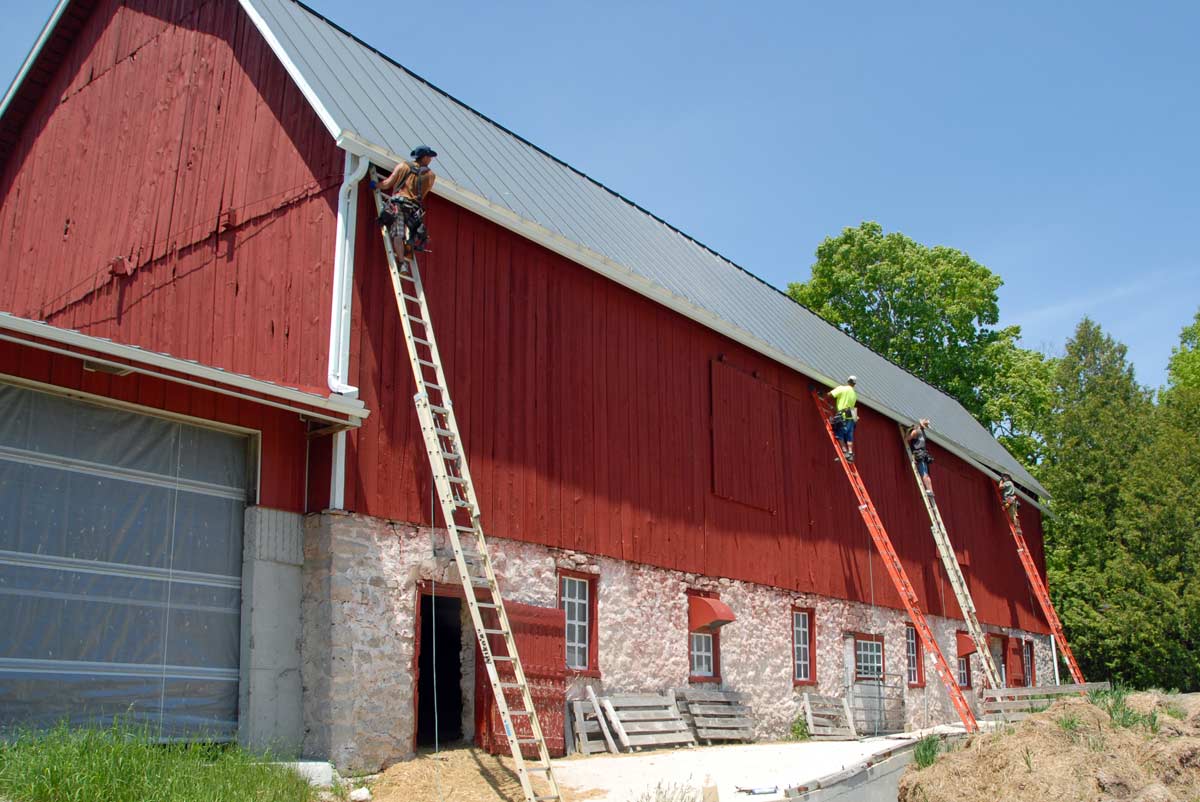 The job was done before chore time and the sheep were able to return home from pasture that evening without experiencing any disruption. That night and the next day it rained again (.65 inches). After months of aggravation it was a joy to see the water flowing to where we wanted. Yesterday we received another .65 inches. Everything is working well on the gutter front!

The week prior to the gutter installation the two of us took time off on Tuesday. The gallery is closed that day and we had no B&B guests. We spent a leisurely day driving around parts of the county that we rarely get to see during our busy season, often on quiet back roads. East of Sister Bay we got quite close to this immature hawk. 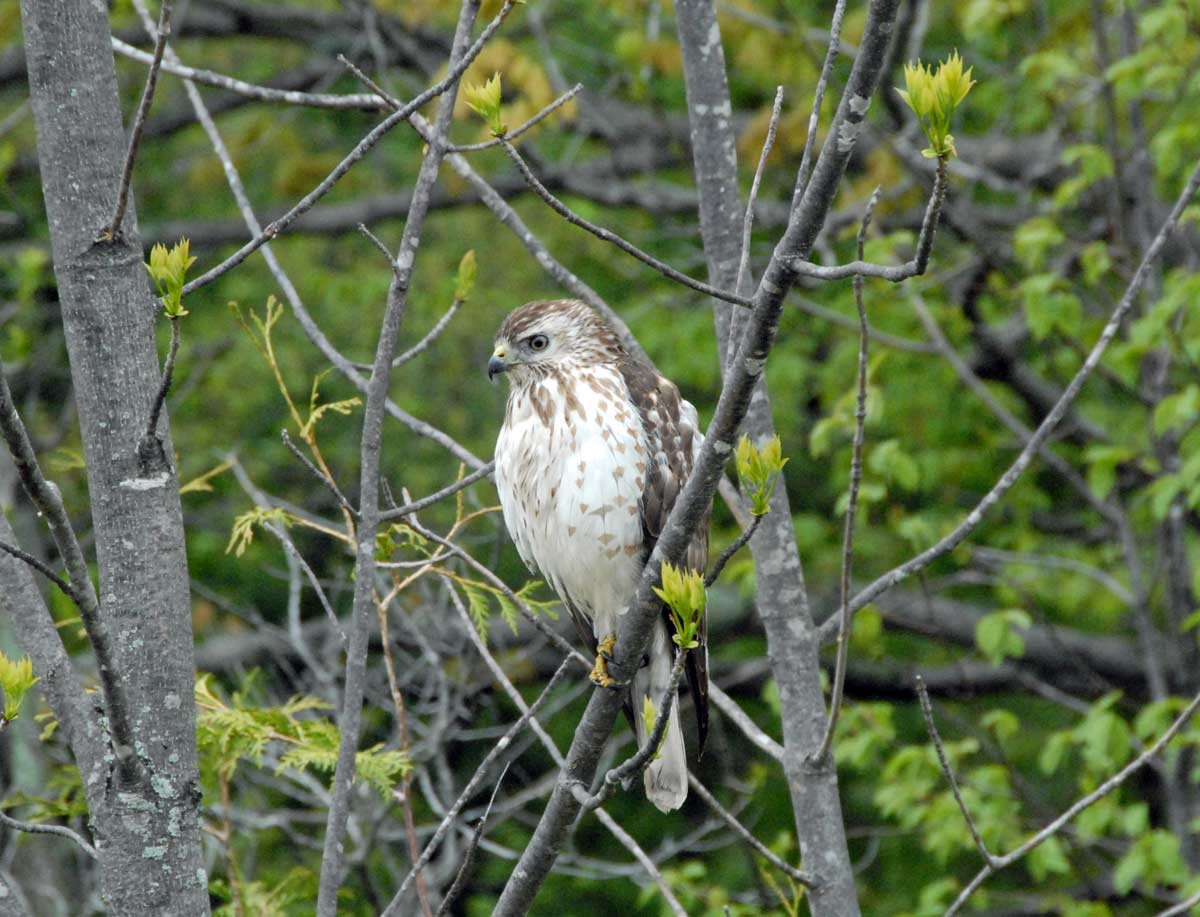 As best that I can tell it is an immature Cooper’s Hawk, but it may be a Sharp-shinned Hawk. It was quite cooperative, quietly posing for us in an Ash tree that was just leafing out. 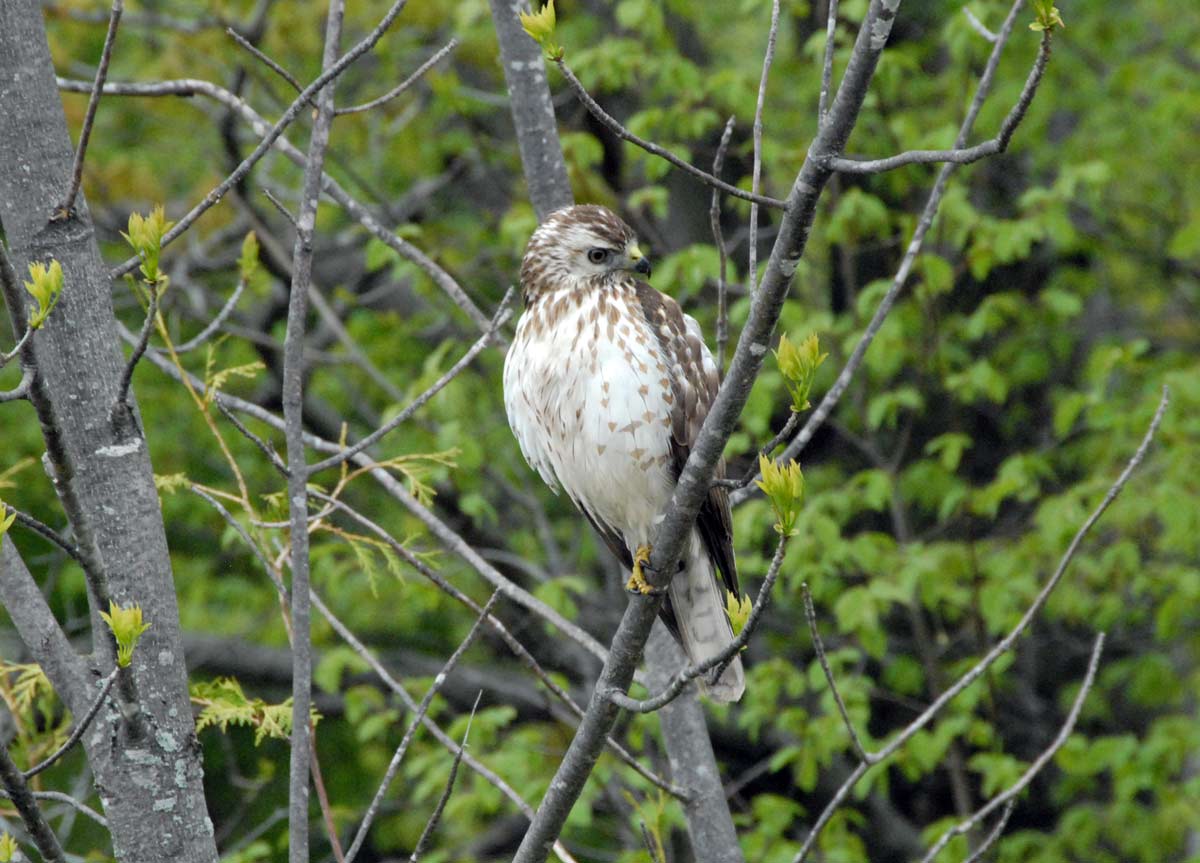 What does not appear in either images is an irate Blue Jay, hoping around in the tree branches above it, making enough racket that any other bird in the neighborhood would know something was up.

Closer to home we stopped along side one of our favorite open wetlands. Normally this area only has standing water for the few weeks immediately during and following the snow melt. This year there is still a lot of standing water here, it is merely concealed by the growth of grasses and reeds! We were treated to views of a family of Canada Geese with young goslings all in tow. More spectacular was a single Snowy Egret and a pair of Sandhill Cranes in the middle of the marsh. 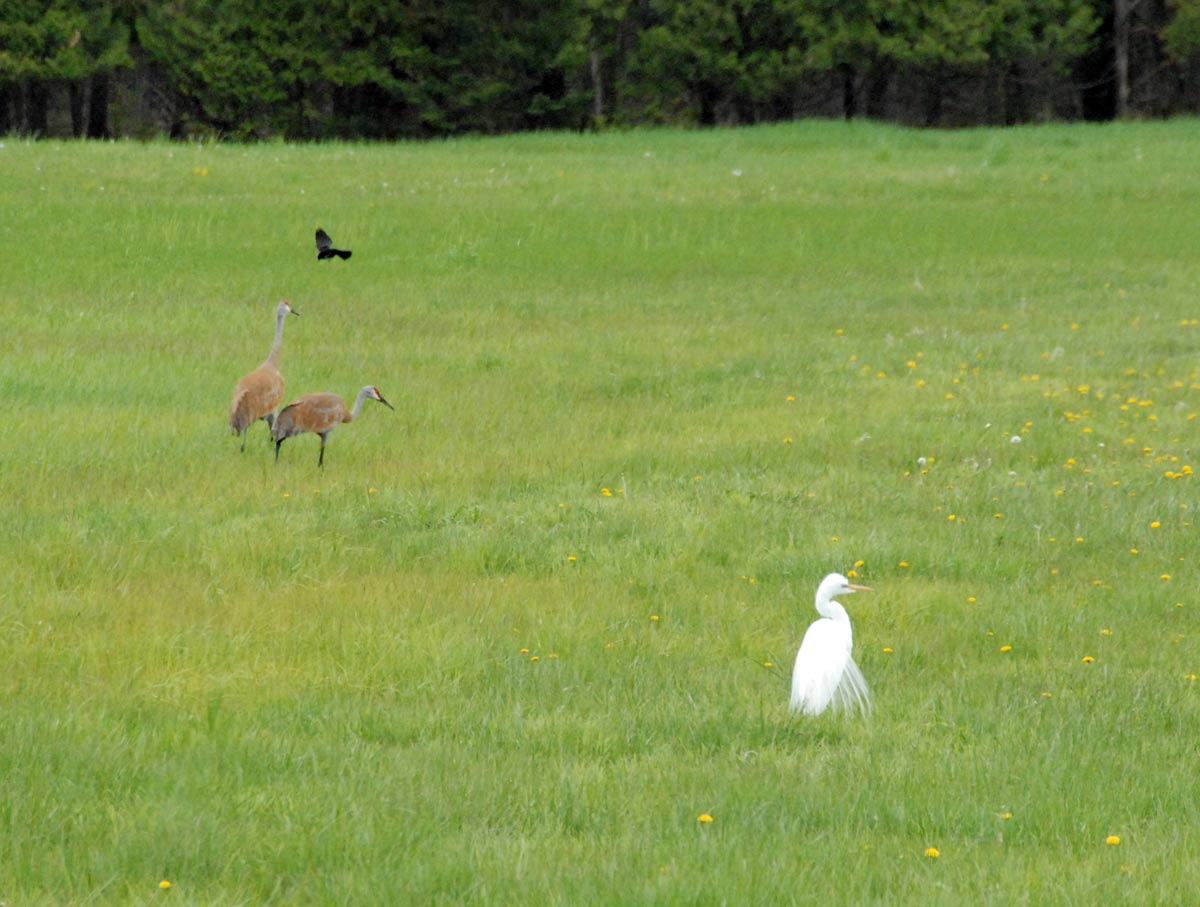 The cranes had made the “mistake” of wading too near a Red-wing Blackbird’s nest. The male Red-wing was not happy and repeatedly tried to drive the two cranes away. Eventually the two cranes ambled off to the ultimate satisfaction of the Red-wing. 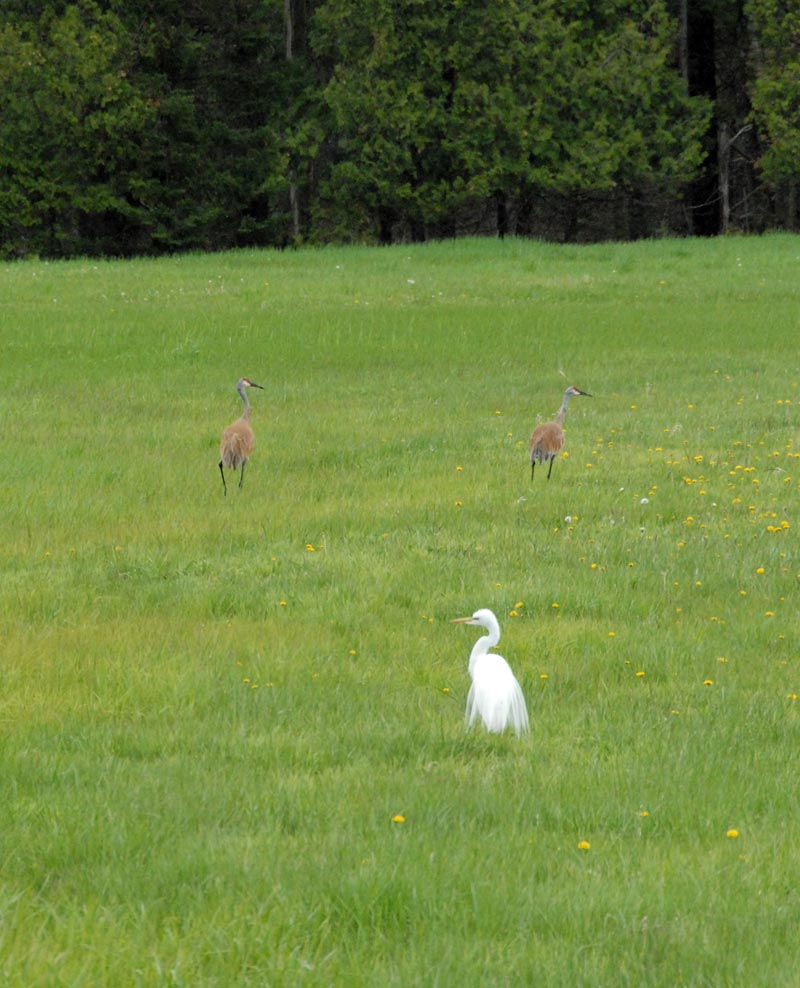 All in all it was a nice day away from home!