I chose to travel to the Faroe Islands for three main reasons. First, the trip afforded me the chance to see some spectacular seabird rookeries. The islands themselves offered spectacular scenery. And lastly, they would, hopefully, broaden my exposure to a part of the Scandinavia world and culture to which I had previously not been exposed. I must however admit that the visit offered an intriguing possibility of seeing a different breed of sheep, along with a different method for raising sheep.

The Faroes are populated by around 48,00 people and roughly double that number in sheep. It is difficult not to find sheep just about everywhere on the islands. They are common along the roadsides and seem accustomed or oblivious to speeding vehicles. In the Faroese language, the name “Faroe” literally means “sheep islands”. The sheep are almost exclusively of the old Scandinavian, short–tailed type. They constitute their own breed, which is most closely related to the Icelandic sheep breed.

Many of the sheep, especially the ewes, spend the entire year outdoors, moving up and down the mountain slopes, depending upon the weather, the season and the growth of grass. The rams tend to be kept close to “home” except during breeding time. Feeding cut hay is limited to winter, especially to those sheep that are not free roaming on the mountainsides on what are known as the “outfields”. The “infields” are those closer to the villages. The infields may constitute the winter grazing for some of the sheep, but they also serve as the source of winter hay. 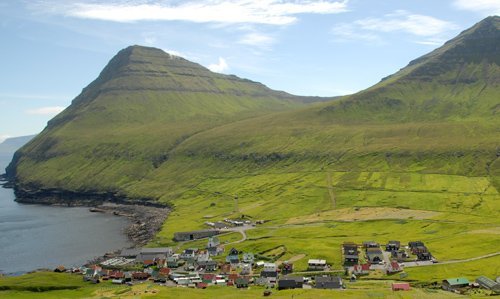 In this picture one can discern the infields and outfields on the slopes above Gjovg. The lightest, almost yellow areas are those that have been recently cut. The medium green areas have already been cut and are regrowing, or are awaiting cutting. Higher up the slopes are the darker green outfields, that are steeper, rougher and the exclusive domain of the grazing sheep.

One of the major differences from my Wisconsin experience in sheep husbandry is in the process of hay making. In Wisconsin, we tend to cut hay with varying large sizes of equipment. We dry the hay on the field and then bale it in different sizes bales varying from 50 to over 1000 pounds. These hay bales must be dry enough that they will not mold when stacked in a barn. In some operations, the baling time is shortened, by baling slightly moist hay which is then wrapped in plastic, where the hay will ferment as silage, in much the same process as occurs in a silo.

No matter where I was on the Faroes I fell in love with the smell of the recently mowed grass hay. I like the smell of any fresh cut hay, but the Faroe grass hay was especially sweet and delicious smelling. I would be fascinated to know what special type of cheese can be made from the milk of grazing sheep and cows in the Faroes.

In the Faroes there are very few areas that lend themselves to large scale mechanical cutting and baling. Most of the country is not flat. Many of the infields are small and quite steep. The cutting is largely done with walk-behind sickle-bar mowers, the blade for which is only about three feet wide. 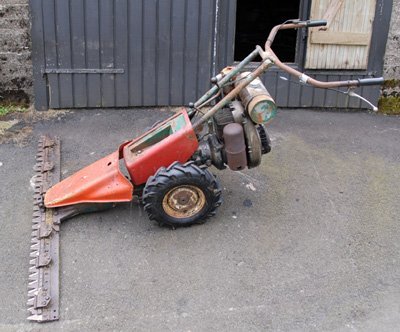 Just as I admire the fence building talents of Faroes sheep farmers, I also am in awe of the amount of physical effort they make to cut and store their hay. 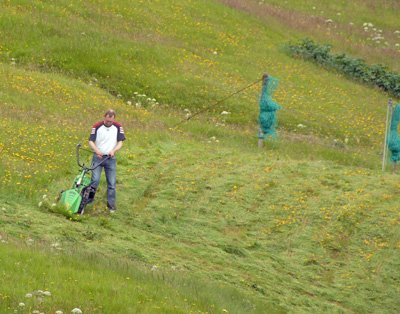 Here is an example of the cutting being done, in this case on a very small field on the slopes above Gjovg. On the steeper sloping fields, the cut hay is raked by hand. On the slightly gentler and larger fields a walk behind mechanical hay rake may be employed. 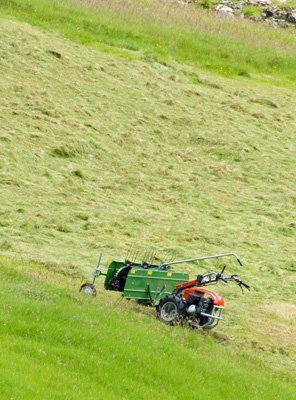 One some of the larger fields, hay rakes attached to tractors are used, but obviously, the degree of incline of the slope is a limiting factor (the tipping of a larger tractor can be a serious problem.)

Hay drying is done in a number of ways, some of which, I suspect, is weather dependent. In some cases, the hay is simply raked, by hand or mechanically, into windrows and left for a day or so to dry. In those situations, it is then gathered, by hand and moved into small sheds for winter storage. In other situations, the cut hay is raked and then hung, by hand, on permanent outdoor racks made of numerous strands of tensile wire located in the field. Here is a view of recently cut hay being hung on such a “fence”. 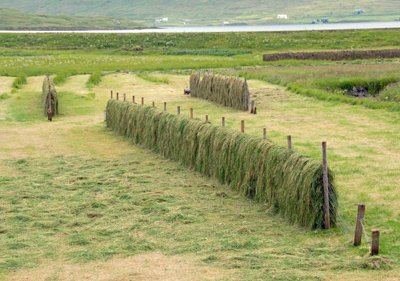 Many of these racks even have built-in provision for the storage of a rake and hay fork. 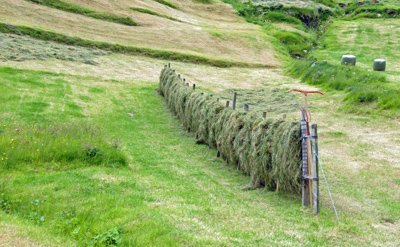 In some situations where the hay is being hung and/or being moved directly into a shed, one will also find that some of the hay has also been baled into small plastic covered round bales. This image from the village of Tjørnuvik offers a view of all three processes. 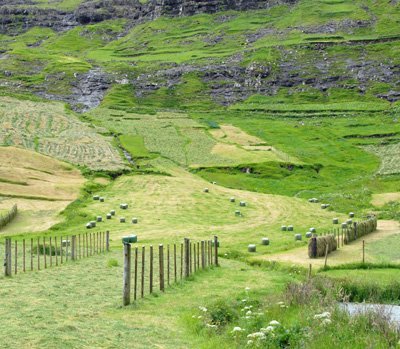 It also shows how steep and varied the terrain is for this type of operation, especially on the more mountainous northern islands.

The storage sheds are often located within the villages. Here is a shed in Tjørnuvik, recently filled with hay. There are sides partly built of stone, the rest with open slatted wood, to allow the hay to breathe. 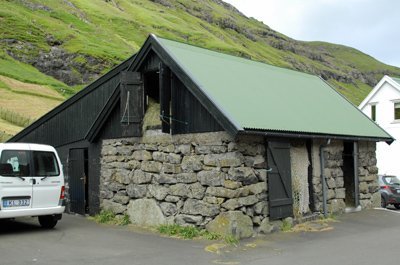 Elsewhere the shed may be located out on the fields, like this one near Trøllanes, on Kalsoy. 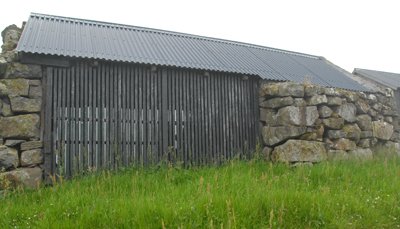 Farther south on the island of Streymoy the land, while steep, stretches out into larger fields. Here is a field, near Sydradular, in which the hay has been baled into small round bales encased in plastic for silage (or baleage). 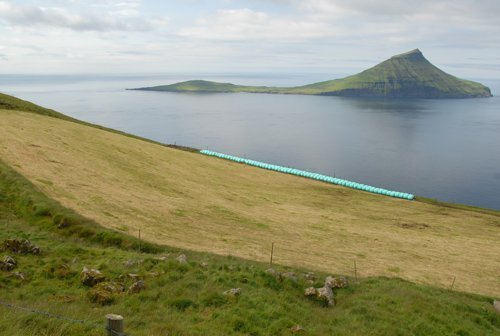 They are then stacked on the field and eventually covered with a tarp. In the same general area I came across a couple of milk cow farms. Here the field is large enough to get a large round-baler onto the field. 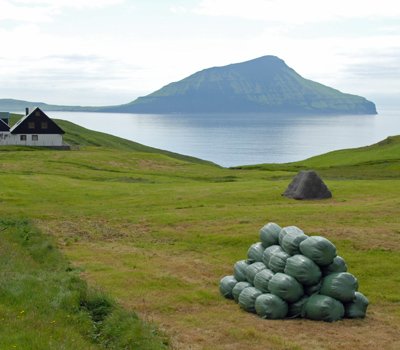 The bales are again wrapped in plastic, as baleage, and then stored on the edge of the field. It was obvious that the baling operation was tricky, as I saw some significant slippage ruts made by the tractor. It was also quite apparent that the field had still been cut with a small, walk-behind sickle-bar mower!

The small island in the last two photos is Koltur. It is inhabited and farmed by at least one couple raising sheep and Scottish Highland cattle.

Hats off to the Faroese farmer!