A month ago I wrote that we were experiencing a super abundance of rain. At that time it was impossible to even consider cutting and baling hay, despite the fact that the hay was ready. The ground was too wet to be rolling heavy machinery across it. The frequency of the rainfalls was such that it would have been very difficult to cut and dry the hay sufficiently to get it properly baled. By the first of July the hay was becoming over-mature. It was also very deep. This view, on July 4th, is from the northeast corner of our large hay field, looking south along side the pasture we know as the “Orchard”. 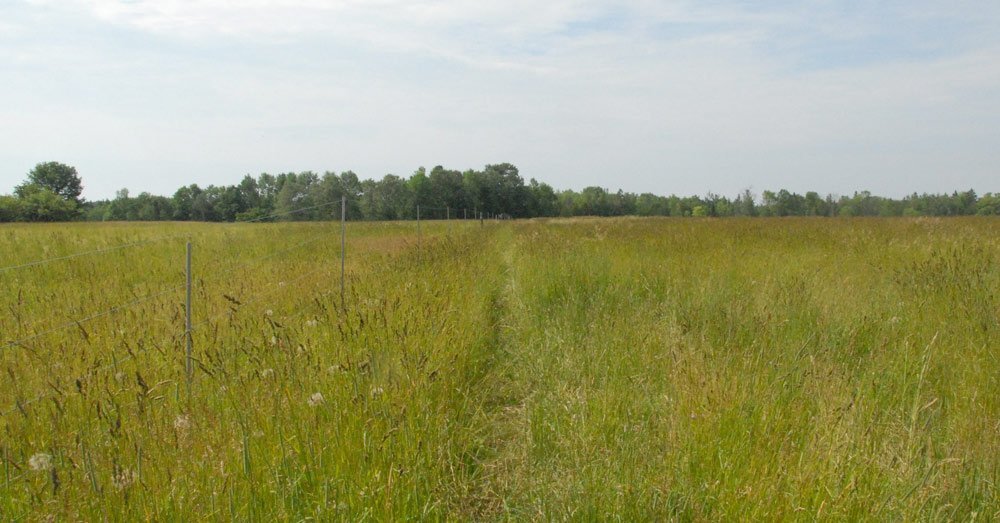 One would hardly know that the sheep had recently grazed the pasture to the left of the electric fence. The hay along the footpath straight ahead was from 3 to 4 feet deep. The next picture was taken at the opposite end of this path looking back toward the house and barns. 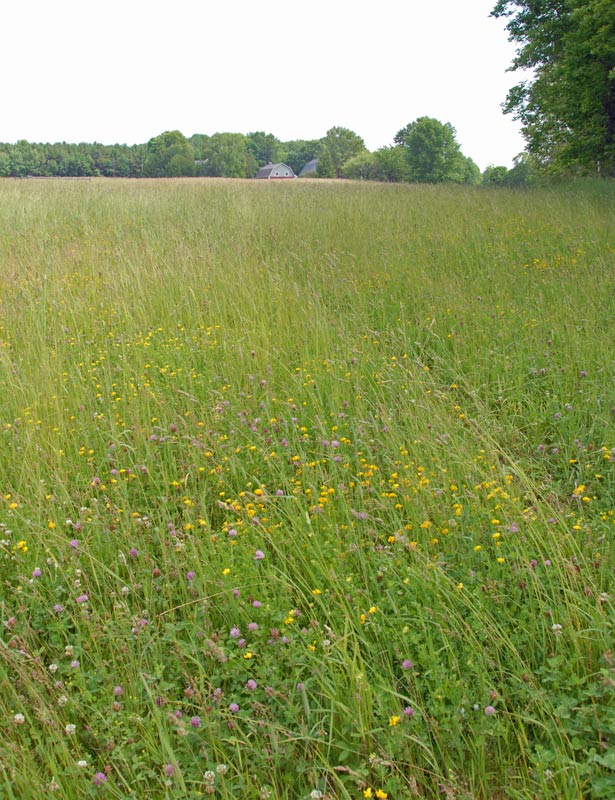 This is an especially nice part of the field, with a nice mix of red and white clovers, plus lots of trefoil mixed in with numerous types of grasses. These views are all rather hazy, due to smoke which was drifting south from forest fires north in Canada. The images are significant in that we decided on that day, the 4th of July, to cut all of our standing hay. The weather forecast finally seemed to indicate a dry spell which would last long enough for us to cut, dry, rake and bale our hay. By the end of the day all 35 acres were cut. Needless to say, we were now committed!

Unfortunately the smoky haze did not permit as much sun in to rapidly dry the cut hay. In addition to which we also received an un-forecasted light rain on the 6th, which further slowed the curing process. By the 9th the hay was still struggling to dry and rain was forecast for the night of the 10th. We decided that we had to gamble and therefore we raked the hay on the 9th in hopes that it would be ready to bale the next day.

(I should point out that this is the third consecutive year that we opted to bale all the hay into large round bales, as compared to the small square bales that I had made for at least the previous 26 years. The changing weather of the last three years has made it next to impossible for me to cut and small bale the entire field. There is just not enough dry time any longer. The beauty of large bales is that the larger equipment used also permits faster cutting, raking and baling speeds. Hence, the entire 35 acres can be cut in less than a day, raked in even less time and baled in less than a day.)

Despite some initial mechanical problems, all of the hay was successfully baled before chore time on July 10th. And yes, we did receive a light rain that night. At least it was not significant enough to harm the baled hay. 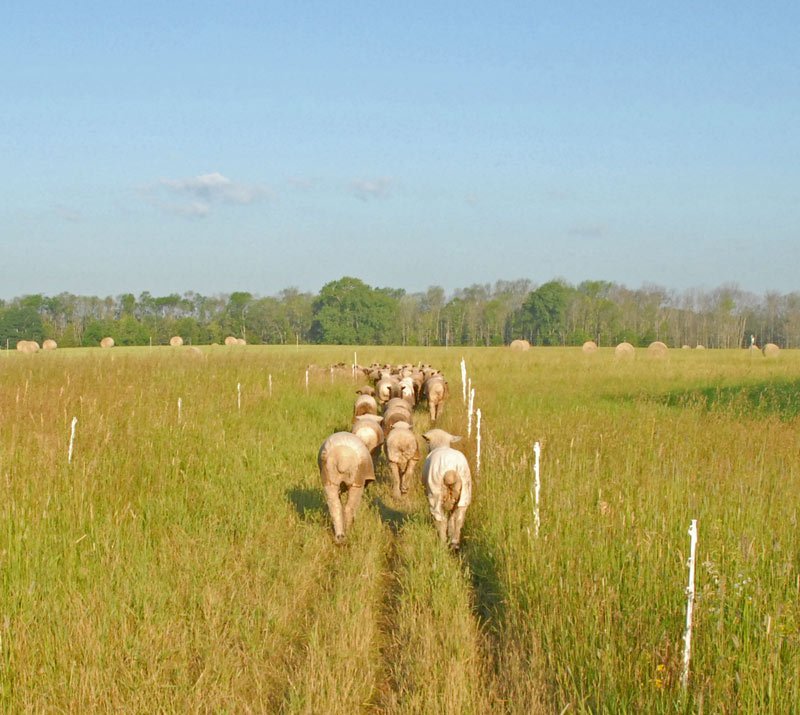 This is the view that greeted the flock as they headed out to graze in the “Orchard Pasture” the next day. It was interesting that the flock was not particularly bothered by a large tractor repeatedly rolling past them on each of the three days that cutting, raking and baling occurred. It was almost as though it was a bit of entertainment for them. I am also sure that they appreciated the fact that any breezes from the west or south were no longer slowed down by the tall grass next to their grazing area. 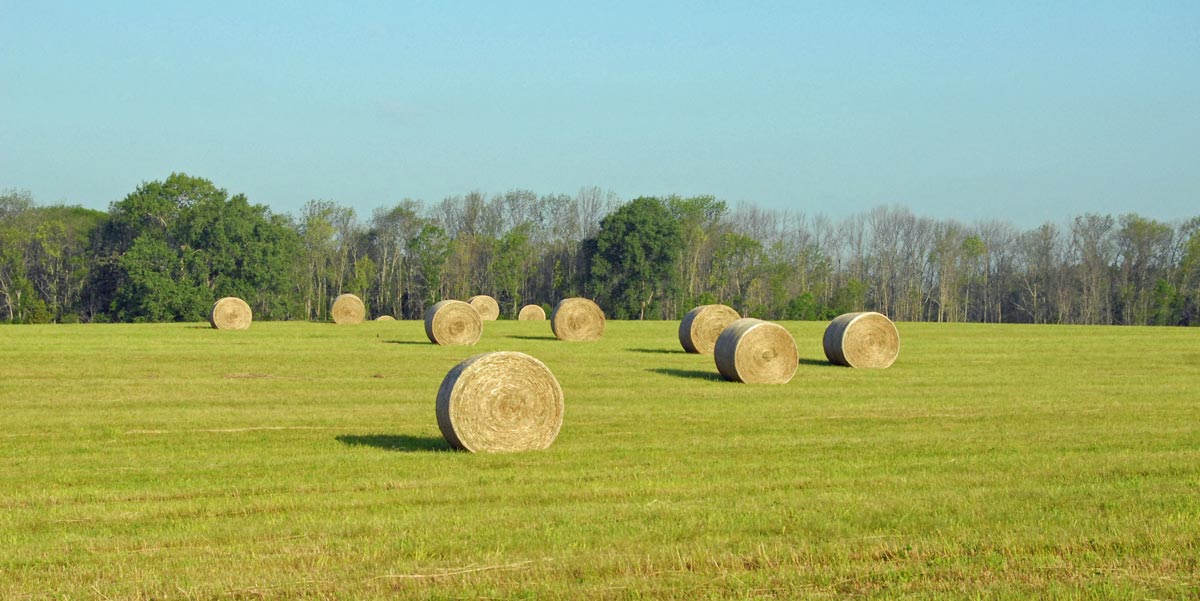 Here is the view that the sheep now had to the west: large, beautiful round bales scattered off into the distance. Or, if you prefer the eagle eye view, here is part of, but not all of, our new collection of round bales for this year. There are probably equally as many bales out of view farther to the right and in a smaller field to the left. To the left are the strips that the sheep just finished grazing in the “Orchard” over the previous 6 or so days. 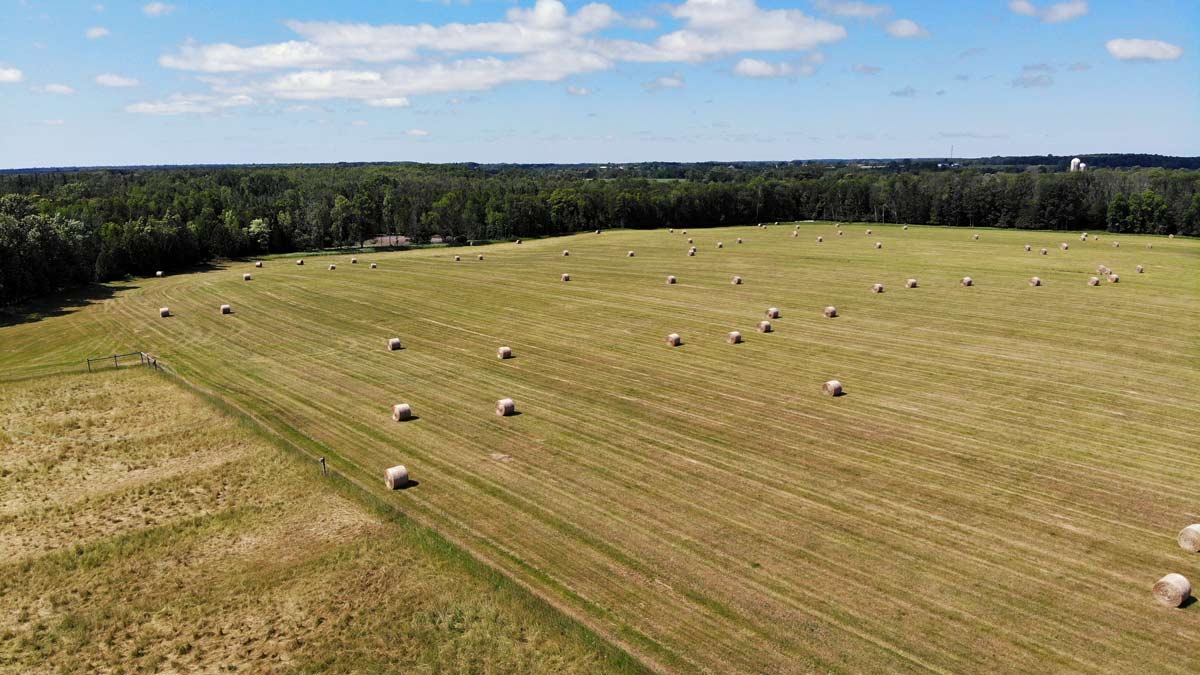 Since the baling was completed, I have been slowly and hopefully steadily collecting the bales and transporting, them 6 at a time, down close to the barn, where I am getting them covered with tarps in order to protect them from the weather until such time as we begin feeding them to the flock, probably sometime in October. As I write I am about 60% finished. I got nothing moved yesterday. The weather caught up with us. Mother Nature dumped over 4″ of rain upon us yesterday morning in less than 3 hours! So now I wait for the uncovered bales to dry. Luckily they shed most of the rain. All I ask for now is just a couple more days without rain!