June is now history. In the space of the month we have gone from spring (a frost in the first week), to full blast summer (temperatures in the upper 80° F (30° C), to cool and damp. In Door County, June is the time for cutting and baling first crop hay. It would be nice to have the entire job done by the end of the month, but that rarely occurs for us. This year is no exception. The trick for making hay is all in timing. The hay must be cut when it is not wet and when there is at least a couple of days for warm, sunny drying weather in the forecast. If it all works out we can get the hay into bales and put away in the barn before the next rain. While we would like to depend on the forecast to be accurate, it often is not. More likely is that the forecast changes as soon as we have cut hay. So far, we have been both lucky and not so lucky as far as forecasts. Once it warmed up we managed to get a good start on cutting the hay. In this image 5 rounds have been cut and the 6th is on its way (leaving about 60 more rounds to go!). 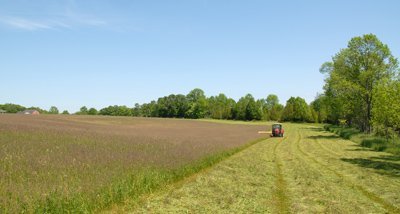 Our hay operation is in many ways antiquated in that we cannot rely on all the efficiencies of modern agriculture. If we had a modern barn facility we could bale our hay in large squares or round bales. Such bales require only one person to operate the baler and one person to later move and stack the bales mechanically. As it is we cannot get such large bales into our barn. Even if we could it would still be impossible to feed them to the sheep in the barn. So we must bale our hay in small bales. To be efficient small bales require a second person to stack the hay as it comes off the baler onto the hay wagon. There are just the two of us and by afternoon when the hay is dry enough to bale Gretchen is manning the Art Gallery. That generally leaves the stacking to me who is also the driver. If I work it properly I can slide up to 10 bales onto the wagon before I need to stop, hop off the tractor and onto the wagon to stack the bales. As the wagon becomes fuller, the stops become more frequent. It eventually gets finished, but not as fast as it would with dependable help. 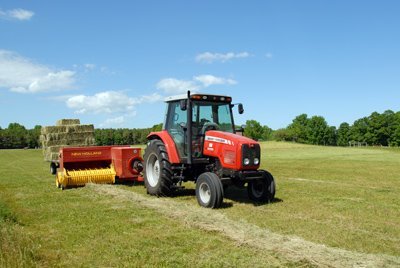 After all the wagons are full they then need to be unloaded, which is again a two person job (one on the wagon to unload onto the elevator and the other in the hay mow to stack the bales). Here at least the two of us can work together. Since the barn is next to the Gallery, Gretchen can unload as long as we do not have Gallery customers with whom to deal.

This year we still have over 600 bales left from last year which is always a nice cushion should we come up short with our current crop. Here is the first mow cleaned and ready for new hay, next to the remaining 2008 hay in the second mow. 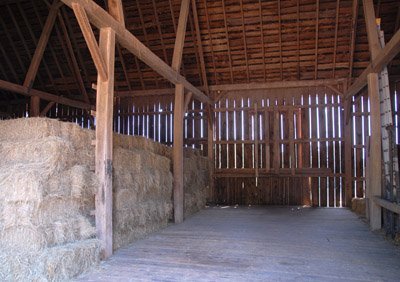 When they are full each of the three mows will hold hold over 3000 bales. As I write we have baled about 550 bales and they are all safely stacked in the first mow. 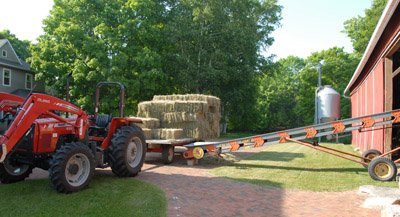 In the photo above, on a hot afternoon we have just taken a break on the last wagon. This was also the last wagon for the day.  Obviously we still have a ways to go before we will be comfortable with our supply of hay for next winter.

Over the last week the operation has ground to a halt. It turned cold and cloudy. Scattered showers became the norm for the last few days; often the rain was followed by periods of mist or fog. It was not weather that permitted any further cutting. Unfortunately we guessed wrong before the rain began: the result is five rounds of hay that were cut the day before the moisture arrived. It still sits on the ground awaiting sunshine and warmth to dry. The moisture does it no good nutritionally as it lies there. Presumable the warm, dry weather will return. When it does we will have to get back to work.