It is a good thing that September is almost over. It has been a month in which seemingly every piece of equipment I was connected with broke down. On the very first day of the month I was attending a harvest festival at a dairy sheep and goat farm that also makes their own cheeses. The experience was highly enjoyable and educational. The cheeses they make are truly a taste delight! However, while I was in one of the sheep pastures, my glasses fell apart. In the deep grass, the offending screw was nowhere to be found. Due to some of the other problems (which I shall list shortly) it took a couple of weeks before I could get to Green Bay to have the glasses repaired.

Within a couple of days of the glasses falling apart, my computer decided that it was no longer happy and promptly died. The frustration of dealing with repair technicians over the phone became a saga. That the technical experts were all based in India made my level of comprehension more difficult, especially since I must also wear hearing aides. Each phone session lasted at least two hours, after nearly each one of which it was decided a replacement part was in order. After over five phone sessions and before everything was fixed, we had replaced the hard drive, two different video cards, the mother board and two sets of cables between the computer and the monitor. Only this week have I finally been able to reinstall all my programs and software. I am extremely thankful that I had at least backed up the computer to an external hard drive. Needless to say, this snafu is the reason that no blog entry has been found here for so long.

In the midst of the computer dark times one of my hearing aides decided to fail (just before a weekend). A trip to Green Bay righted that problem and also let me get the glasses repaired. (As an aside, the major Interstate bridge in Green Bay developed a major sag within hours of our having driven over it. It is now closed indefinitely. It was not my fault!)

Even my loom got into the act last week. In the space of a half an hour, two separate warp threads broke on a blanket I am weaving. I have not had a broken warp thread in a couple of years.

With a day to go in September I can see and hear pretty well. The weaving is back to normal and the computer seems to be functioning well. At least I have not had to use any of the farm tractors. I certainly do not need them acting up on me.

Life on the non-mechanical side has been much better and a lot less stressful. September has been relatively dry, but we have had enough rain to keep the pastures green, even though they are not growing like I would like to see. Yesterday the flock spent their last day grazing in the #3 pasture. They will not return there until next spring. The same will be true with each of the pastures they visit over the next few weeks. It is hard to believe that we are just a little over two weeks away from putting the rams in with the ewes we will be breeding. Today the flock returned to our large hay field. It is rare that we graze portions of that field twice in one year, but it has recovered sufficiently from the last grazing. It should provide the flock with enough grazing to reach their breeding date. 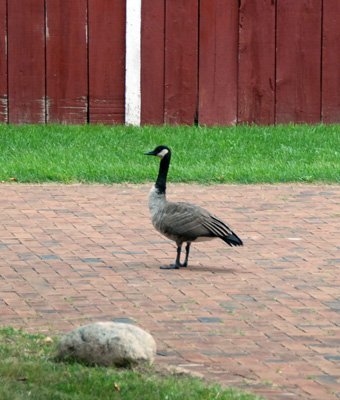 We have also had unexpected guests. This inquisitive Canada Goose spent the better part of a morning walking around the house, unfazed by the goings and comings of our paying guests. The next day we knew it had been here a while. The lawn and driveway were well fertilized.

Our flower and vegetable  gardens have fared well, considering the dryness and a couple of extremely hot days in September. The marigolds planted around the vegetables are still blooming madly. We have already harvested their blossom three times this year. The most recent picking was a ten days ago and the plants will soon be ready again to harvest. 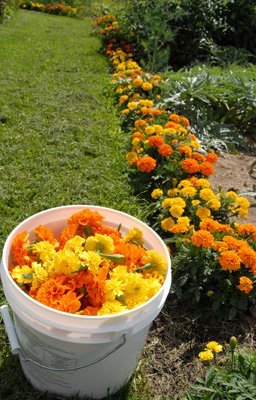 The most recent picking went straight into Gretchen’s dye pot. As expected, they yielded a brilliant yellow dye. When Gretchen was finished, she also over-dyed much of the yellow yarn using indigo. The results were lovely shades of green. We are also (finally) getting a prolific blossoming from the cosmos that we planted at the back of the vegetables. They too should yield some wonderful yellow yarn.

The big vegetable excitement this year is our artichoke crop. Last year I struggle to even get the artichoke seeds to germinate. To compensate, this year I doubled the number of cells in which I planted the seeds, in addition to which I planted two seeds in each cell. The result was that nearly every seed germinated. After transplanting the duplicate seed into their own pots I had 18 artichoke plants. I planted them all. All but two have survived. Usually I also have spotty success with the mature plants producing lots of blossom buds (the part you eat!). Not this year. Here is what one small corner of the artichoke patch looks like (just two plants). 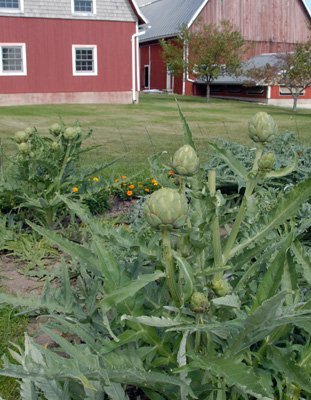 We seem to be eating artichokes every night and have yet to see production drop.That makes up for lots of the month’s frustrations!