We find ourselves in the hectic late spring/early summer, when it is difficult to believe that so many things are happening to us simultaneously. At least, so far we have not suffered a lack of moisture. Unlike much of Wisconsin that has been drenched by storms, we have enjoyed regular, but not excessive rains. As a result, pastures are growing well…so well, in fact, that the sheep have not been able to keep up with them, despite my efforts to rotate them through more quickly than usual. The rain has been frequent enough that getting hay cut and baled has been a major challenge. Currently we are way behind schedule in that effort. I am hopeful that in the next week or so I may be able to make a dent on the uncut hay fields.

It has also been a month in which there have been numerous interesting animal sightings around our the farm. Unfortunately each of them has occurred when I was far from a camera. The White-tailed Deer doe that gave birth just beyond our bedroom has been sticking close to “home” with her fawn. For the first two weeks of grazing it seem almost as if the doe and fawn were shadowing the sheep, grazing in adjacent pastures. It seemed as though they gained some security by being near the flock. On a couple of mornings I walked withing 20 feet of the pair, without them spooking. (Of course I was without camera!) More frequently, they have been more distant. The fawn, however, still bedded down often near her birth place. I spooked it two days running as I set up the day’s pasture in the “Orchard”. Two days ago I also encountered a mother Turkey and a bunch of chicks in the same tall grass. Mom was exceedingly upset by my presence and closely shadowed my movements until I was sufficiently distant from her brood.

Two days after we finished grazing the Third Pasture, I was busy removing temporary fencing. As I approached the spool of portable fence in the far corner I was surprised to find a porcupine tangled up with the lead wire that connects the outer fence to the spool. The fence had been turned off at that time, so the porky did not suffer the pain of repetitive electric shock. Nonetheless he/she was tightly wrapped up next to the fence. I returned to the barn to get some wire cutters and heavy leather gloves. Clipping the lead wire was enough to free the porcupine, who was too fatigued to challenge me afterwards, so I managed to exit the scene with a set of lead wire clips that was now in pieces, but without any souvenir quills. Sorry…no pictures; in my rush to free the porcupine I forgot the camera.

Interestingly, this is the first porcupine that I have seen on our property in quite a long time. Their numbers locally seem to have dropped significantly in recent years. It has also been a very, very bad year for Monarch butterflies. I am seeing very few of them. So far I have also seen no sign of any Monarch caterpillars on any of the local Milkweed plants. Similarly there are virtually no Bobolinks to be seen in our pastures; another all time low!

The local Woodchuck population does not seem to be suffering. As I spent a couple of days early in June cleaning out the barn, I was able to clearly see the rock pile in the center of the Fourth Pasture. In addition to a pair of adult Woodchuck, the tarn was populated by at least three miniatures, all of whom were having a grand time scampering up and down the rocks. As long as I stayed put in the skidloader, they did not pay any attention to me and the noise of the machine. When I went to fetch the camera, the dynamics changed. The kids and adults were nowhere to be seen (until I returned to work!).

The youngest of our lambs are reaching their 3 month birth dates (which means that the oldest are 4 months old). As a group they are growing amazing well. It is a good group that we are quite pleased with. We will be retaining a large number of ewe lambs from the group. This will be our last group of lambs that we keep. This group of lambs should reach their retirement age about the same time as the two of us. 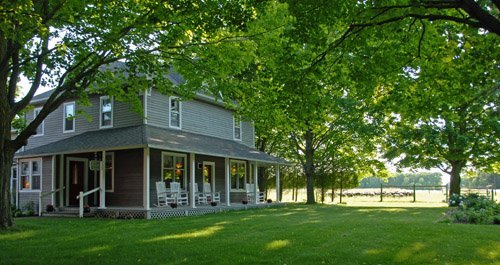 So as not to go totally without a picture this time, here is a view late yesterday afternoon, after the flock spent the day as close to the house as they can come. They provided good company for our breakfast guests that day!