Hello everyone! It is Nanoo Nanoo, the voice of reason, sanity and sheep. It has been a long, long time since I logged into the online world. To be honest, it has been just too hot and too humid for me to spend time trying to hack into the old bearded guy’s computer, just so that I could write something for you of the non-ovine world. The flock knows what is going on, so there is no reason to keep them informed with stuff they already know. At least the weather is now finally more comfortable. So I am back with all the news that is of importance! I am sure that you may be wondering what we sheep have been up to recently. So let me see if I can give it a shot.

Besides the weather being hot and humid, it has also rained an extraordinary amount here this summer. It has meant that there has been plenty of fresh green pasture for all of us to graze. For that we are forever thankful, because we remember all too well what a hot dry summer can do to our pastures. When that happens, not only does that mean that the old shepherd guy has to feed us baled hay in big feeders out on the pastures, but it means that the bearded guy can get exceedingly grumpy (not to mention depressed). With all the green grass he, at least, has been a lot easier to deal with. Every so often we do hear him grousing about how hard it has been to bale hay, but that seems to be as far as his complaints have been traveling.

Here is a picture of us heading out to pasture in the early morning. You may notice a few black specks on the picture. Queso assures me that it is not dirt on the lens, but rather some of the multitude of barn swallows that share home with us each summer. They are always very excited when we go out in the morning since we always stir-up lots of bugs for them for their breakfast. The last of their second broods of young are just about all fledged. This nest, crammed full with six babies, took flight the morning after this picture was taken. 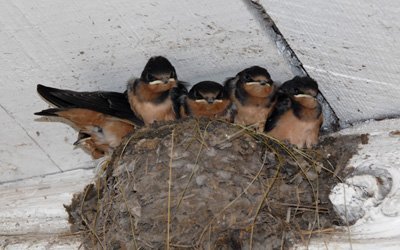 We were also quite excited because we had a flock of their Purple Martin cousins visit us for a few days a week or so ago. It would appear that they had finished raising their broods and were getting ready to move south. It is always nice to add their song to the morning chorus. We just wish they could have stayed around a bit longer!

From what we can gather the flock is pretty much at its over-wintering numbers (which amounts to about 130). We were sad to see a lot of our lambs depart, but at least most of them were headed to good new homes. Thirteen of the young ewes recently left for a place in southern Wisconsin and another eleven went all the way to western Montana. (In think that is a long ways off, but Queso and I have yet to figure it out. We do know it is not in the same direction as Denmark.) A couple of the older gals and a ram lamb, Zeus, also headed south to new homes. 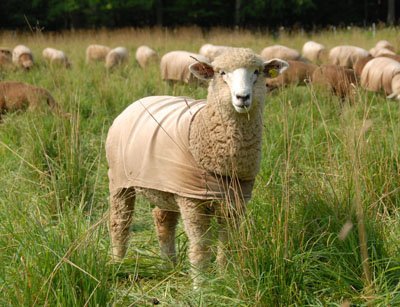 The rest of us have kept busy entertaining and enlightening the humans who stay at the Bed and Breakfast. That can be exhausting. Just because they have finished their breakfasts, they think that we too should be finished with ours. They do not understand that sheep meals are a much more cultured experience, which needs to be drawn out and savored. But we try to put on a good show. It lets the nice lady show off our wool and heap us with praise. It also keeps the old bearded guy in good spirits. Lots of these folks end up taking pictures of all of us. We keep wishing that they might send us copies that we could share with the rest of you. We also try to avoid stepping on their toes, since we know that would not be good for public relations!

One of the other reasons I have not been online of late is that I have had to work at my job as editor of Baabaadoo Press. It seems that people who have been reading the old shepherd guy’s book have been letting him know that he had a bunch of typographical errors. So before he started blaming me for all of them, I figured that I had better give the book a “run through” again and make any necessary corrections. Hopefully I caught and corrected most of them. I must admit that I was guilty of one boo-boo. 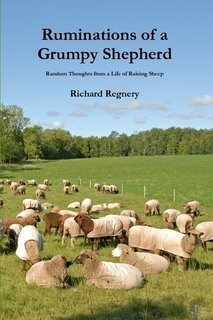 I wrote about the “breaded” shepherd. But maybe that was intentional, on one of those days when we were thinking he might be better off breaded and fried. In any case, we got the corrections made. Hopefully Ruminations of a Grumpy Shepherd is now better reading for those sensitive to spelling and grammar. It is now safe to buy the book either soft-bound or hard-backed. So much for my “non-ovinish” plug!

Well there is green grass, clover and trefoil waiting for me so I must be off to pasture. It is, after all, lunch time!