A while ago I promised to try to talk with the old Grumpy Shepherd’s wife, the Nice Lady, about her trip to learn more about indigo dyeing. Well, it took me a while to corner her long enough to get some answers and then get onto her computer to see her pictures. At last I think I have succeeded. I’ll let you be the judge!

Brie: Well Nice Lady, what have you been up to lately?

Nice Lady: Nice of you to ask Brie. I have been weaving in our studio, looking out at the snow, enjoying a nice fire in the woodstove and remembering my trip to Charleston, S.C. in September.  My current weaving project will be a set of pillows, using wool from some of your friends, which I dyed several shades of blue and green at the Sea Island workshop.

B: I remember when you were gone. We were stuck having to deal with the grumpy old guy. We were glad when you came back. So what did you do on the trip?

NL: Well Brie, I arrived in Charleston on September 17th and I spent the afternoon exploring part of the historic downtown district. After I had a wonderful seafood dinner at a waterfront restaurant called Fleet Landing, I spent a restful night at one of the oldest continuing businesses in Charleston, the Barksdale House Inn. The next day the workshop began at the Charleston Museum. There were about 20 of us in the group. At the Museum we learned about traditional Gullah rag quilting from Sharon Cooper Murray. 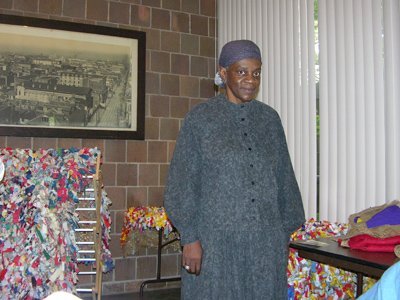 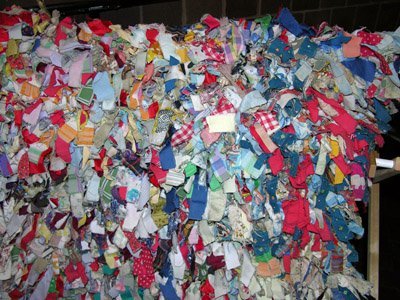 In the afternoon I explored the Museum. The featured exhibit was a collection of old US and Confederate flags. In the permanent collection, as you might guess, I was most fascinated by a display of old spinning and weaving equipment that also include old woven coverlets. 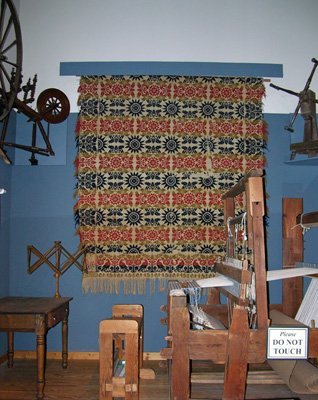 Later in the afternoon, I walked downtown to the Market. The buildings were originally used for the auctioning of slaves; it now houses 3 blocks of local farm and craft booths. It was there that I fell in love with and purchased a Sweet Grass basket, in which some of the grasses were dyed with indigo. The Gullah woman who was working on a new basket told me that she had woven the basket in 2012 and it had not sold, because it was not a “typical” basket due to the indigo dyeing. For me it was the perfect souvenir for my trip! I ended the afternoon with a horse drawn carriage ride through the historic district. 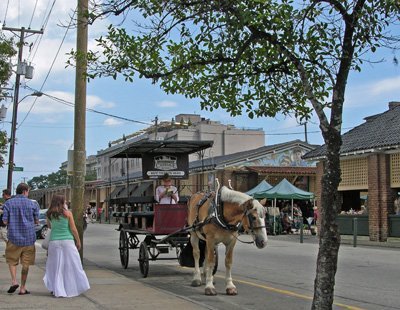 The guide was very knowledgeable about Charleston history and began his talk by mentioning the three original crops that were grown in the colony were: Carolina Cotton, 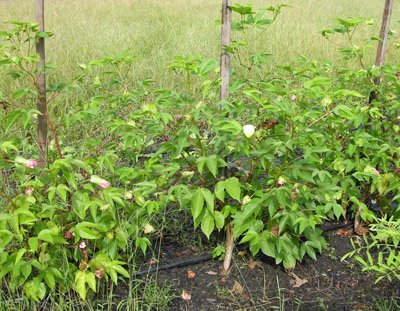 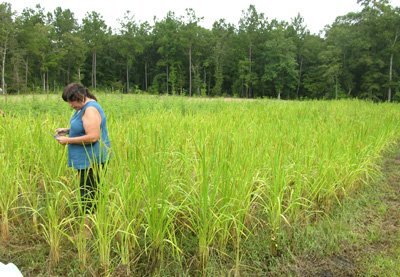 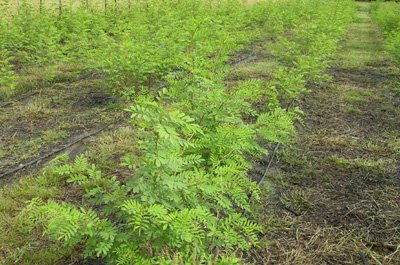 B: Excuse me Nice Lady, but when did you get to the indigo dyeing? I thought that was why you left us!

NL: Sorry Brie, I was getting to that…. The indigo part of my trip began the next day, Friday. Our group gathered at Rebellion Farm where we tromped out to the planted indigo field to pick fresh leaves. 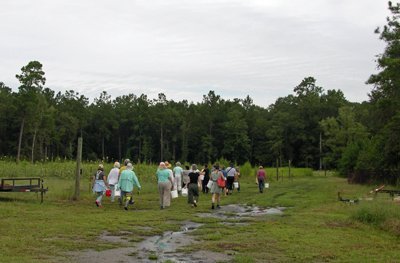 Heading out to pick indigo

Creating a fresh leaf dye bath from start to finish was one of the major reasons I wanted to attend this workshop. To do this step, we divided into teams of 2 people. 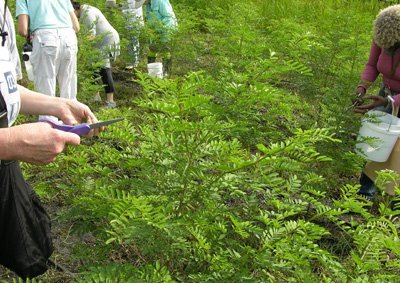 The indigo leaves were weighed and 8 ounces of leaves were placed into a wide mouth mason jar. Water was added to fill the jar and a tablespoon of ammonia was added. The jars were placed in a water bath and over a 2 hour period the temperature was slowly brought up to 140°(F). By then a coppery sheen could be seen on the top of the mix in the jars. 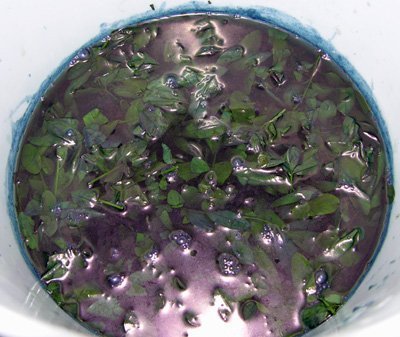 Indigo solution with a coppery sheen

Next the leaves were strained out of the jar and squeezed well to extract all of the indican. We then had to add  oxygen to the mixture by pouring it from one pail to another until we had a frothy light blue foam on the top. We counted the number of pours back and forth. Our batch took 350 pours! We could then add thiourea dioxide to the mixture (an oxygen reducer), returned the jar to the water bath and then, over a one hour period, we brought the temperature back up to 120°(F). Now we were finally ready to dye. For my team’s little mason jar, each of us dyed 2 two ounce skeins of yarn (that is only a total of 8 ounces of fiber!). The first 2 skeins dyed a deep shade of blue. The second two were much lighter, as the dye bath became exhausted. All together it took 6 hours from start to finish.

B: That’s almost the time from breakfast until supper! I am exhausted just listening. What happened next?

NL: We finished the day with plans to start early on Saturday because we had a number of different indigo dyeing processes we were going to use. That night I did call the grumpy old guy to find out how all of you were and to let him know that a green house was NOT in our future. I had originally thought that I would like to grow some indigo for fresh leaf dyeing. In our cold climate the plants would have to start in a green house. After all this work I decided that life is too short and that I would just continue to purchase already prepared indigo.

B: I’m not exactly sure what a greenhouse is, but it sounds like it would take your time away from us sheep. So it’s good you’re not doing that. We don’t need to make your husband any grumpier and we need that time devoted to us! I was going to ask you what you did on Saturday, but then I realized that it was almost time for our dinner. Can we continue our discussing tomorrow? I need time to ruminate on what I have already heard today.

NL: We have a date. See you tomorrow after breakfast!