Now that October has finally departed, it is safe to comment on the changes that it brought to us. October is always our “transfer” month. The Gallery closes for the year in mid-month. The Bed and Breakfast closes up a week later. The pastures are nearly always depleted enough that the sheep have to return to winter quarters in or near the barn where they depend on the hay stored in the barn for winter. As always the sheep also are divided into small breeding groups early in the month. Those ewes that we decide should be placed with a ram remain on the few remnants of pasture until early November, when breeding is also called to a halt. It would be easy to say that that summarizes the last month, but it would do it an injustice.

For me, having newly returned from Denmark in late September, getting back into the daily routine is always a bit difficult. However, the calendar will not pause for me. As such we were all back up to our routines by the beginning of October. The timely rains of late October extended our grazing period a little. On the 5th of October the entire flock grazed the last western corner of the 3rd pasture. Shirley took time to visit with us on one of those last days in #3. 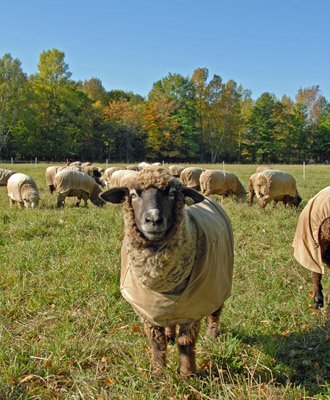 It was a time and a place for all to enjoy. Fall weather had arrived and trees were turning color in their usual dramatic fashion. This is how the flock appeared on pasture that day. 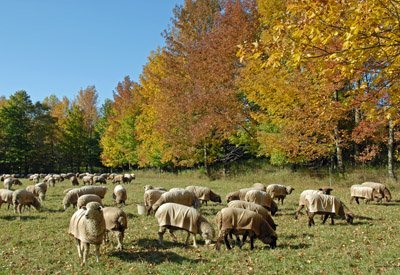 The unusually hot and dry late summer appeared to have an influence on when the trees turned color. On this early day in October the ashes were in full color, while the maples, birch and our few beeches were still mostly green. The following week however dramatically changed appearances. We experienced a few days with extremely high winds out of the northwest, the worst day of which featured gusts of up to 60 miles per hour. Especially in the northern half of the county the damage was dramatic. At the farm we have a number of ash which toppled in the wetland on our western edge. In addition, the top of an large old maple came down in our 4th pasture. Considering the strength of the winds, the loss of that maple was not totally unexpected; it has had more than its share of dead or dying wood for many years. Luckily, no sheep were in the pasture when it came down and it obligingly avoided crashing onto a fence line. We were without power for more than 22 hours. We were lucky; many friends were without electricity for up to three days. Had our outage lasted much longer we would have had greater problems, the most significant of which is a lack of water for the sheep. Lastly all of the lovely yellows and purples of the ash trees were blown away.

In the week following the storm there were numerous branches to clean up, which only complicated setting up the pastures for breeding groups. We did manage to get the rams and ewes together when we had planned. This year we are only trying to breed 34 ewes, which is a significant drop from the last few years’ numbers. One the 11th, Ulmer, Ukiah and Rhett each joined the selected ewes. Much to his displeasure, our other adult ram, Vermicelli got the role of backup. It appears that his talents will not be put to work this year. The three ram lambs, Axel, Andrew and Aries also stayed in the barn. Unlike Vermicelli, one gets the impression that they really do not fathom what they are missing.

As is often the case with October, the sheep have been greeted by a diversity of weather, some quite pleasant and some down right cold and wet. As now seems to be the trend, we have not experienced a truly hard freeze in October. The most dramatic effect of this changing climate is that we have yet to experience frozen water lines and the need to manually transport water out to the three pastures. We have only two more nights to go before breeding is called to a halt. It appears that we may avoid snow and frozen water lines for the first time.

Some of the more pleasant days have begun with heavy ground fog. That is always a visual treat when going out to the breeding groups with their grain at dawn. 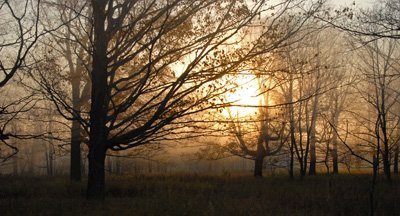 For the final couple of weeks of the month the maples and beeches took center stage with their color show. The final act has been from the birches and especially from the aspen. This view is of Rhett and his group of girls in #4 with the aspen in full display. 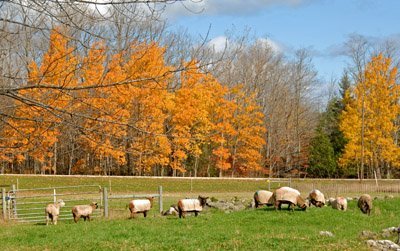 Not to be outdone, Ukiah and his harem had a dramatic backdrop from the last of the maples in between #2 and #3.

It is now a week later and nearly every leaf is on the ground. We are now transporting hay to the three breeding groups and in another two days they will all return to the barn. We have given the ewes one complete heat cycle plus a couple of extra days with the rams. Everyone of the 34 ewes have been marked by the rams. The only question that remains is whether each breeding was a success. To learn the results of this month’s activity will require a return to the Ewe Turn in about five months.