One final taste of Avocados

Life has taken a busier turn for us. As a result, the latest news has now become a little old. We completed our avocado dyeing project quite a while ago. An account of the results were temporarily pushed aside by preparations for the annual shearing of the sheep, followed closely by shearing itself. Let’s turn first to dyeing and then switch to shearing on another day.

We have been asked by a number of people for further information about avocado dyeing, as it seems to be described very little elsewhere. Our major source is an article  “Dyeing with Avocados, Food for my Dyepot” by Carol Lee, which appeared in the Fall 2002 issue of Spin-Off Magazine. Now…on to business!

The second dye bath using the re-ground pits and peels produced mixed results. We had been disappointed with the intensity of the colors with the first dyeing. This second time we tried leaving the yarn in the dye bath for an extra day after the day it spent cooking. We also used alum and copper sulfate as mordants. The presence of the copper sulfate was immediately evident; both the pit bath and peel bath produced very nice green shades. The skein of yarn in the peel solution was, however, not very consistently dyed. 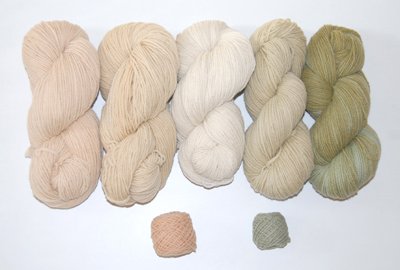