We are now well into July and there are no signs of the pastures drying out. They remain lush and green. Generally, it has also been cooler and wetter than normal, which is an ideal environment for continued growth of grasses and legumes. Daily it has been a challenge to keep moving the portable fencing to properly portion out the grazing for the flock.

Everyone is eager to get to pasture in the morning. Depending upon which pasture is the target for the day, the parade can be quite strung out. 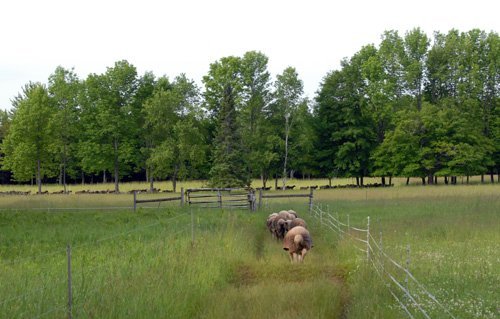 The younger ewes and lambs are usually at the front. Here they are already getting to the middle of pasture #3. The older ladies have still to pass through the gate from #1 to #2, where they have to turn left for a hundred yards before heading south another hundred plus yards. Then they can make the right turn to get to where the younger sheep already are located. (It should be noted that the old ladies still move a lot faster than the old shepherd. This is not a leisurely stroll for the old guy!)

Aside from a few days with heavy rains, the sheep have been keeping up with the pasture growth…just barely. Here they are after just starting their day on a section of pasture #3. 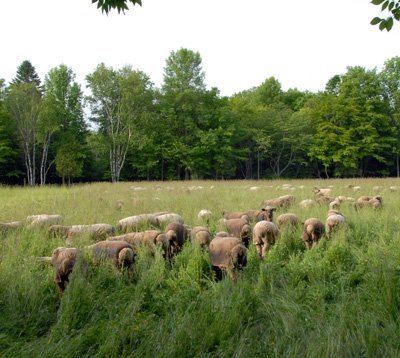 The Orchard Grass is too tall and a fair amount of it will get trampled down, rather than eaten. What is not very visible in the picture is the lush stand of Ladino clover and Trefoil, growing below the Orchard Grass. These legumes do get grazed down nicely, and are amazing in their rapid regrowth.

The rains have been too frequent to allow for serious cutting and baling. Finally this week we managed to get about 20 acres cut, dried and baled, without having the hay get rained upon in the middle of the process. Cutting hay at this time of year is always a challenge. This summer there have been an unusually high number of White-tailed Deer fawns. It took quite a number of rounds cutting the hay field before I was certain that the two fawns that I encountered had left the field. I felt pretty confident once I saw their mom show up. On the way to cutting, I had a doe and three fawns cross the road ahead of me. Triplets are rare, especially when they have all survived to this age. It may have been a hard winter, but the pregnant does seem to have fared quite well.

Closer to home, there have been additional wildlife rewards setting up fencing or taking the sheep out to pasture. This is the scene from #3 looking back to the barns. 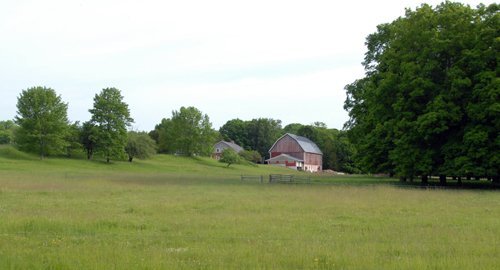 These pastures were recently grazed, but one can hardly tell, as they have rebounded rapidly. This morning, as I approached the corner of the mature maple grove (left hand corner of the photo), I was greeted by a mature Bald Eagle taking flight from the top of one of the trees. It then slowly and gracefully glided across the pasture in front of me. On the way back to the barn, a flock of eight White Pelicans casually soared over the farm. One forgets how close we are to the lake. It is a joy to see both the eagles and pelicans increasing in numbers over the last few years. When we first purchased the farm those sights were not to be seen!