Putting the Farm to Bed for Winter

Life has been busy here of late. One of the results is that The Ewe Turn has been neglected. Now that life seems to be a bit more ordered, let’s see if we can get the blog up to date.

Mid-October through mid-November has always the time that we select to breed the ewes for the next year’s lambs. This year we decided to have a very tight window of breeding opportunity. This should result in a relatively brief lambing period next spring. There were three groups of ewes set out on October 15th, each with their own “special” guy, Andrew, Aries or Axel. The number of ewes was also intentionally smaller (27) than it has been in a long time. This year we allowed the ewes only one full heat cycle (17 days) in which to get bred. The weather ended up extending that period a few days and, as a result, each group came back into the barn on November 3rd, which is also when the rams returned to their bachelor quarters. By that date all but one of the ewes were marked by the rams. Consequently, at the most, we should have 26 pregnant ewes. (All this assumes that we experience no unplanned late visits by the rams like we experienced last year!)

After a relatively dry September, it rained an awful lot in October. Among other things, it made the speedy breeding experience less than pleasant for all concerned. However, considering the time of year, we got through breeding (and so far most of November) without extremely cold weather. It was one of the first breedings that we have had in which our pasture water lines did not freeze up a single time. Only on a couple of occasions I had to chip just a thin layer of ice from the top of the water buckets in the pastures. We have yet to see any measurable snow. Many of the trees here held onto their leaves until very late, especially the maples. This is the view from our first pasture into the maple grove November 3rd, the day we brought the sheep in. 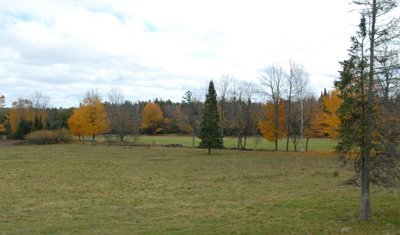 One of the tasks that I had hoped to finish this fall was to trim up the trees that border the third pasture. Many of the branches were getting low enough that I could no longer drive a tractor under all of them. My plan had been to do the trimming by myself, with an extension handsaw. Once I finally took a close look at the assignment it was apparent I would never finish (i.e. my arms would never have survived). Instead one of the crews from Dave’s Tree Service came in with their power equipment and a chipper. In a day they had the entire job completed. I now also have a large pile of wood chips which should help eliminate the muddy spots on the trails to the various pastures. One of the intentions of the job was to also let a little more sunlight onto parts of the pasture to improve the grass growth for the sheep. An unexpected bonus from the trimming is that we can once again see the stone fence line along the southern edge of the pasture. I had almost forgotten how nice it once looked. Here is a distant view of the finished job, looking across pasture number two into number three. Here too the maples were tenaciously hanging onto their leaves. 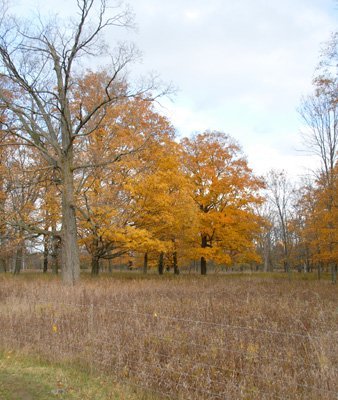 This was also the fall that we had to deal with roofing problems. The house had been re-shingled a few years ago and the barn has its metal cover in place. However, the gallery was still sporting the set of shingles we put on it shortly after we purchased in farm in 1983. The windier storms we experienced this year were starting to systematically remove those shingles. As soon as the gallery was closed for the season we had a contractor lined up to rebuild the roof. It became a challenge for all concerned to work around the numerous rain and wind storms that hit us over the next two weeks. The worst of the storms dumped over one and a half inches of rain overnight on Halloween. At that time half of the western side of the roof was still only papered and not shingled. Unfortunately, we now have some water stains inside from that storm. Those repairs will have to wait until the weather dries out and gets warmer. The view from the “orchard” pasture the next day was a deceptively lovely green and yellow scene.

Because the gallery roof was actually partially rebuilt, it meant temporarily removing the cupola from the ridge. It was a good opportunity to give it a better repainting than I could do when it is on the roof. In addition, I was able to make some structural repairs to the cupola. It took three of us to get it down and later to reinstall it. I find it difficult to believe that a few years ago I got the entire structure up to the roof ridge by myself. I guess that is a testimony to youth! At least the gallery is now completely re-roofed, as is the little garden shed. Once that job was completed we also had to deal with some roofing issues on an area where the roof to the addition met the roof of the original house. Luckily, Thad and his crew got that job completed between two heavy rain storms. Hopefully we are now buttoned up nicely for the winter.

On another front, the vegetable garden just did not want to shut down this fall, since it was moist and relatively warm. We did not experience a hard frost until the last week in October. The tomatoes were still producing well into October. For a time it seemed that the artichokes would just continue on forever. In mid-October the prediction for a killing frost prompted me to pick nearly all the remaining artichokes. The result was nearly two 5 gallon buckets of artichokes of all different sizes. The frost did not occur that night, and the few smaller artichokes that I missed on the plants continued to grow, albeit slowly. Another two weeks time produced enough baby artichokes for a lovely breakfast frittata. The ‘chokes we had harvested earlier were finally all consumed in mid-November! What a feast that was!

The last of the carrots were still in the ground in early November. When I got around to them there were some monsters in the ground. 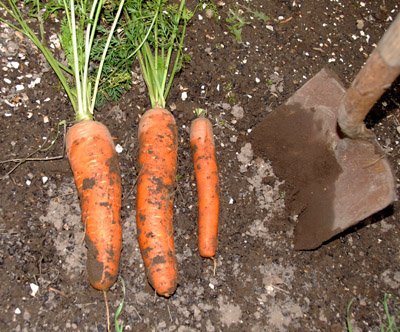 The carrot on on the right, is what we normally would consider large, at least 1 inch in thickness at the crown. The brute on the left was at least 3 inches thick and his buddy was nearly that size. I can only surmise that they found a spot in the garden in which I had not thoroughly mixed in the composted sheep manure from the previous fall. After they were harvested I am guessing that the garden heaved a sigh of relief!