Rails in the Hay and Signs of Change

Early as it might seem, during the third week in August we began to sense that there was a taste of fall in the air. The early morning air was crisp and fresh. By late evening, when it was time to bring the sheep in, the air turned cool and was heavy with smells that I only associate with autumn. Considering the long, hot dry summer, all of these sensations just did not seem to fit. But sure enough there were other signs. Suddenly we have begun seeing Nighthawks toward sunset. I always associate Nighthawks with hot sultry summer evenings in St. Louis or Milwaukee. When we moved to Door County we seemed to leave them behind, except for the last few weeks before fall, when suddenly they appear each evening.

Within two days of the first Nighthawk sighting the last family of Barn Swallows left the barn and the farm. That event is always the exclamation point at the end of summer! Once again the barns are strangely silent during the day. Their departure is at least three weeks earlier than last year.

It was as if the birds had responded to a false alarm because by the last week of August the weather reverted to the hot, dry days of the entire summer. Compared with much of the Midwest we had managed to squeak through with just sufficient moisture to keep the pastures green just when we thought they were going to curl up and turn brown. I have been amazed (and pleasantly surprised) how well our pastures have held up. We have only received an inch of rain in August, scattered over the entire month in small batches, but it has helped. The areas that the sheep have grazed have grown back. The hay ground eventually recovered from first cutting to the point that I could make a second cutting. As of this morning the barn is virtually full. We should have enough hay to make it through winter. Not too long ago I did not believe that we would ever put that much hay away. 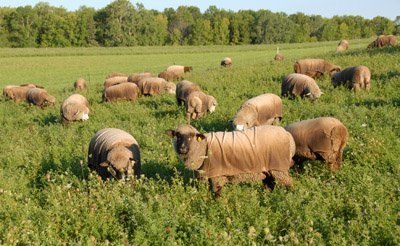 This last week the return of the heat along with strong, dry winds seems to have finally tipped the balance for the pastures. They are no longer responding to the morning dew; the areas of thinner soil are now drying up. Luckily we did not have to cut all of our large hay field to fill the barn. The sheep are finishing the job for us on the six or so acres that the front the eastern edge of the field. They seem quite happy with the lush grass and alfalfa (which even though is in full bloom appears to be quite tasty). I am hoping that the couple of weeks that they take to finish off that section of the hay field will give us time to get some rain to get the other pastures started again. 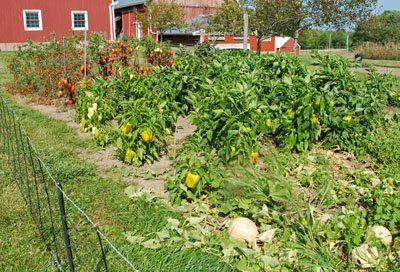 Just a few of the melons, peppers and tomatoes

Extra irrigation has done wonders for much of our vegetable garden. Our tomatoes, peppers and melons are especially productive and tasty. Even with the B&B it is difficult to keep up with the four different varieties of melons. The artichokes have not been nearly as happy; I have not been able to convince them that this is coastal California!

The hot, dry weather at the end of the month made cutting, drying and baling hay a simple task (as long as it did not get so windy that the windrows decided to march off toward Lake Michigan!). The last day of cutting convinced me that the birds are onto something as far as the seasons. Every pass through the field with the haybine would flush three or four Sora Rails. An area of just a couple of acres contained at least 50 rails. For a bird of the marshes, the beginning of fall is the only time that I ever see them in our hay fields. The Soras are on the move. When you watch them flop out of the hay and barely make it a couple of hundred feet before they seemingly tumbled back down, it is very difficult to believe that some of them are headed to as far away as Peru. They are in much closer touch with the seasons change than we are and they are heading south!