June and early July have been an interesting challenge for cutting, raking and baling hay. While May had been dangerously dry, June made up for it with a vengeance. During June we recorded 14 separate storms with measurable rain ranging from .1″ to 3″ in rainfall. July has not had quite so frequent rains, but the threat has been here nearly daily. I figure that I am doing well to cut hay one day, and let it dry for two days and get it baled on that third day. 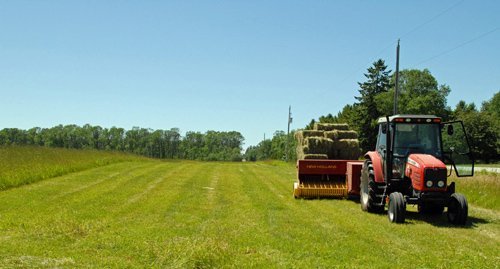 There have been few stretches where it has not rained in a three day period, so our haying has been spotty. At least what we have baled did not get rained upon. 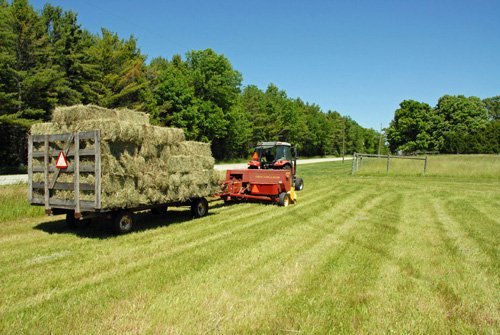 One of the joys and  frustrations of making hay is that I must spend a lot of time on a tractor driving relatively slowly, in large concentric rectangles. One needs to pay close attention to where you are going while making sure that the haybine (hay cutter) or baler are properly operating. There is also time for thought and occasionally watching the world go by (again and again!). Usually my greatest entertainment comes from the animal life (especially birds) in the neighborhood. Every year I can count on our large resident population of barn , cliff and tree swallows to provide me with an aerial escort. The equipment never fails to stir up bug life in the hay which the swallows eagerly snatch as they fly around me. This has been an especially fine year for the swallows.

I have also noticed interesting changes from most previous years of haying. Normally when I am cutting or raking I will attract a number of Ring-billed or Herring Gulls along with Common Crows, all of whom follow behind the haybine and gobble up the occasional mouse or vole that is exposed in the cut hay. This year, however, both the gulls and crows have been noticeable by their absence. This year like most I almost always have at least one Red-tailed Hawk who sits atop one of the big Cottonwood Trees on the west  edge of the field. If conditions are right he or she will soar along high above the field and successfully grab either a mouse or ground squirrel.

Over the last couple of years I have been treated to more frequent sightings of Bald Eagles and White Pelicans. In both cases they will just be slowly passing through using the thermal currents to cut great circles above me. This year I have counted flocks of 30+ pelicans overhead. When we first moved to the farm in the 1980’s, both the Eagles and Pelicans were never to be seen.

On the negative side has been the extreme lack of butterflies of nearly everyone of the usually common local species. I am also struck by the additional lack of any insect pollinators in our vegetable and flower gardens. Not only are they missed just for their beauty but also for their services. Most noticeable of all, in terms of butterflies, are the Monarchs. Normally they begin to arrive on the farm in the last week of May. I did not see one this year until mid June, and since then I have seen very, very few. A testimony for their absence are the number of Milkweed plants we have that are totally lacking Monarch caterpillars. Sadly it is a wonderful year for Milkweed growth. Each morning as I set up a new grazing cell for the sheep I try to check any Milkweed plants that will end up being grazed. If I find Monarch caterpillars on them I will collect them and transfer them to the vigorous stands of Milkweed that we have established outside out grazing areas. So far this summer I have found exactly two Monarch caterpillars in the pastures. There is no question in my mind that the Monarchs are in very serious trouble!

On a more pleasant final note, I even have had some lovely views driving the tractors to and from the hay field. This year was beyond a doubt the best show of Dame’s Rocket blooming in the pine plantation across from us and on the slope behind our main barn. While it is an alien plant to the area, it at least beautifies the otherwise rather sterile under story of the pine plantation (which is, of course also an alien planting). 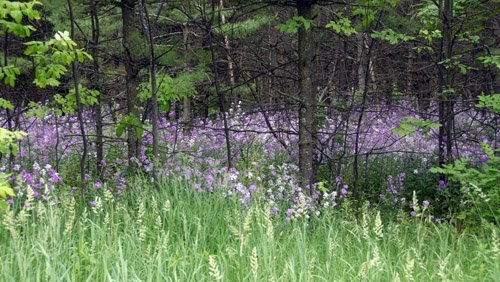