Round Bales on the Winter Menu

Folks who have followed the Ewe Turn blog this year will know that we had a terrible time trying to get our hay cut, dried and baled. By mid August we had only managed to successfully bale 725 small bales, when normally we would have a supply of at least 2500 bales set up to get us through the winter. However, just before the end of August we succeeded (with the help of a neighbor) in getting the remained of our 30 acres cut and baled into large round bales. That supply assured us that we would have more than enough hay to comfortably feed the flock through the winter and spring.

The strange part of the fall weather was that it did not cool off nearly as much as usual, even though the rains continued to exceed their usual amounts. As a result the entire flock was still grazing nice, lush pasture until nearly the end of October. Here is a view of the flock from October 20th, grazing what we know as the “Road” Pasture. 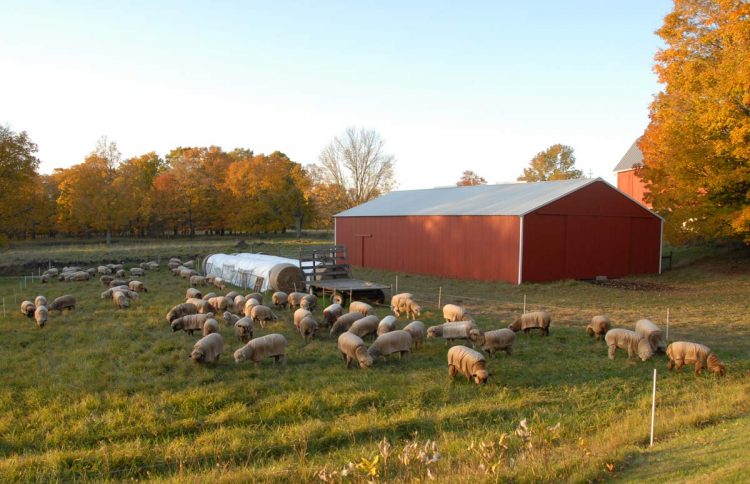 The flock lost a bit of grazing ground on this pasture since we had 30 round bales that needed to be store outside under tarps. (We filled up all of our inside storage space with an additional 38 bales.) As can be clearly seen, most of our trees were still holding on to lovely fall colors despite the late date. Our vegetable garden was also still going strong because it had been warm and there had been no killing frost. 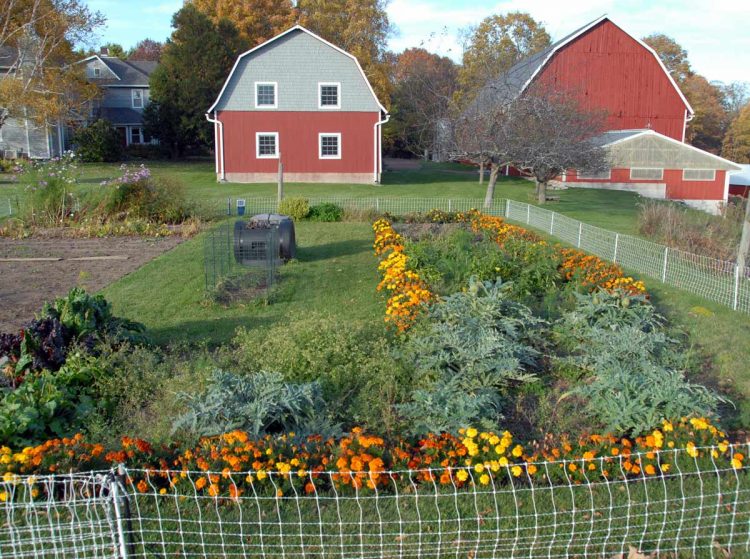 Lots of our vegetables had been completely harvested. But during the last full week of October the peppers were continuing to produce a prodigious volume. We finally got a good harvest of artichokes. And, the dye flowers, Marigolds and Cosmos still had not shut down. By the 23rd of October the flock had rotated through all of their regular pastures, so we began grazing the section of our hay field that we had succeeded in baling earlier in the summer. Suddenly on October 26th we received a dramatic killing frost. The garden was “toast”. I managed to remove all of the dead plants  and here is the scene by October 29th; the garden is gone. 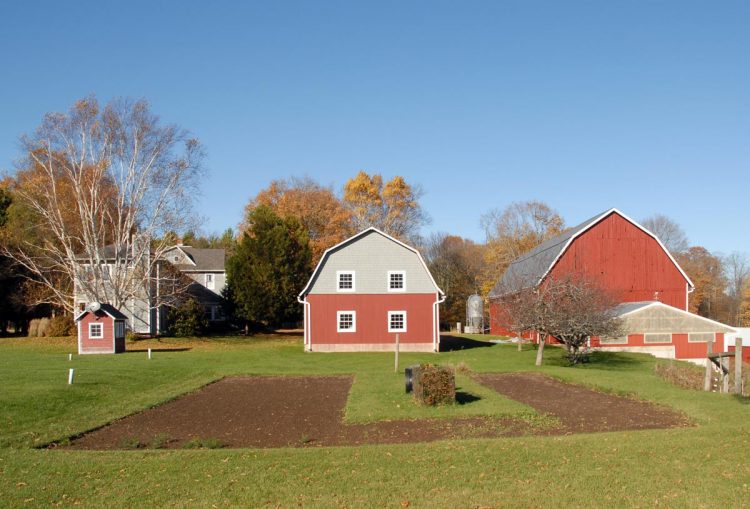 The pastures were also compromised by the frost. In addition the forecast called for continuing cold weather. I shut off and drained the outside water lines to the pastures before they froze up. Without water and with suddenly poorer grazing, the flocked moved into winter quarters on October 27th.

With the flock moving indoors we began a new experience for the sheep and the shepherds: feeding and eating large round bales indoors. Our plan is to hold our supply of small square bales in reserve, for periods when we cannot get the round bales into the barn due to weather conditions. As long as we can, we planned to feed the round bales. We have had experience feeding round bales outside during a couple of summers when, due to drought, we ran out of pasture. In those conditions the round bales can be placed on their sides in a pasture where they are surrounded by a four-sided collapsing fence. The sheep can put their heads through spaces in these feeders and are able to eat without trampling on the hay. Unfortunately the round bales are much too large to fit through any of the doors in the main barn. We have fed large square bales indoors in a number of situations. This has entailed breaking the bales apart into slabs and then dividing the slabs to fit into the 14 5-side feeders in the barn. In many ways it is just the same as feeding small square bales. However, round bales do no break into convenient slabs. They are one continuous slab, which has to be unrolled and torn apart (and there are no convenient perforated edges). It therefore has been a learning experience for all of us. I believe that we now have things working on a good routine. Here is what is now going on; I will use this week as the example. 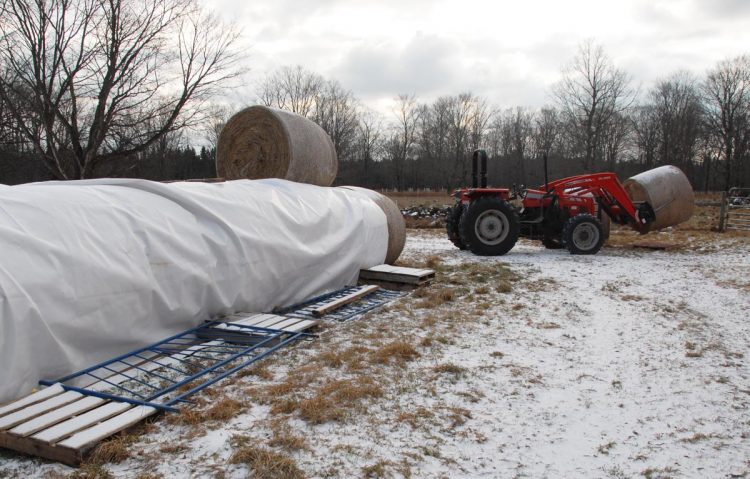 We can comfortably fit 2 round bales on their sides inside the annex to the barn. This means having enough space that I can get the tractor completely into the annex before I unload the bale and tip it on its side. There must also be enough room that I can easily walk all the way around the bale as I unwind it. I have learned to judge how much hay from the round bale will equal the amount we used to feed from small square bales. Each meal I end up with 14 piles of hay of (hopefully) equal weights, which I then must carry into the main barn to place in each of the feeders. When we finish off those two bales we bring two more bales into the annex. Above I have just removed a bale from under the tarp. Now begins the trip into the annex. 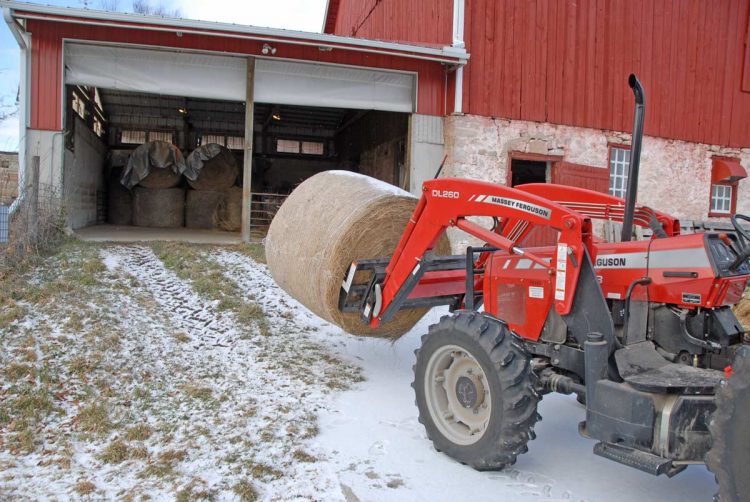 When we built the annex to the barn we did not image that we would some day be moving such large objects into it on a regular basis. The slope up into the annex is a bit tricky, especially with a bale weighing over 600 pound on the front of the tractor. Now is when I am especially thankful for a 4 wheeled drive tractor! (A project for next spring is to put down a good solid gravel base for what has become a driveway.) 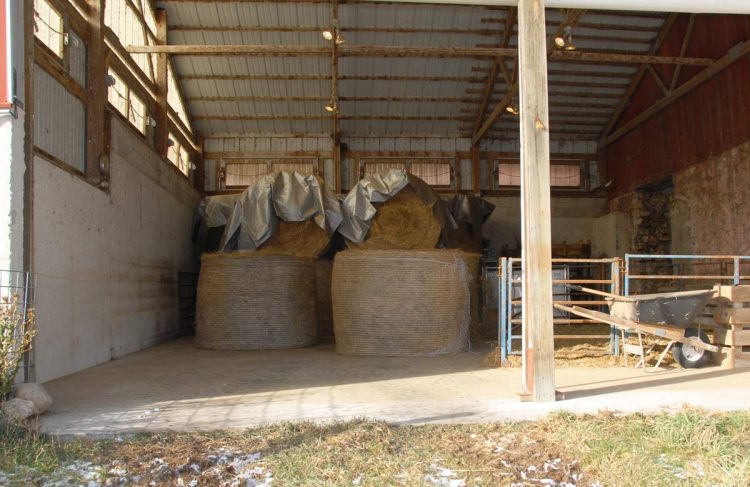 Once the tractor is inside, the bale needs to be tipped over onto its side. Here the job is nearly done. The next two bales are in place and ready to feed. (The bales that are stacked behind these two are part of our indoor inventory, to be fed once the outdoor stored bales are finished.) 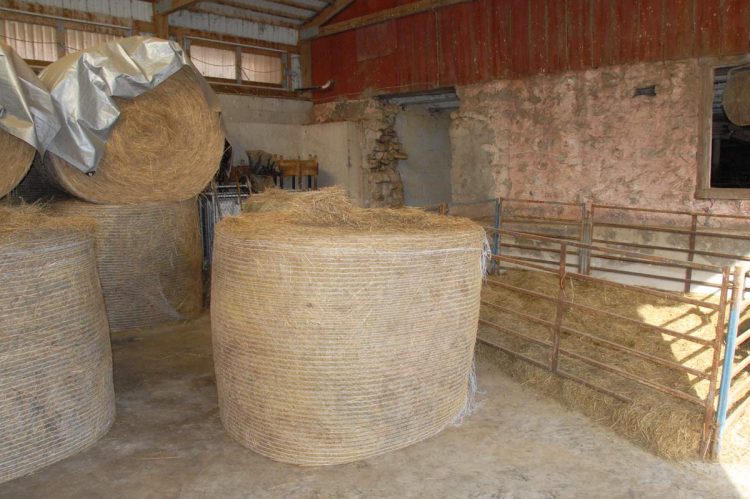 This is the next round bale to be unrolled and fed. Each armload of hay makes its way through the doorway in the background and on into the smaller feeders in the main barn.

We began feeding this bale this morning. We seemed to have gotten a good fix on a successful amount to feed each day. This is now the 16th bale we have fed. Each bale almost always lasts 4 days. As a result I will need to repeat this transfer operation every 8 days this winter. The sheep seem content. They are cleaning up what we are feeding them and are not complaining before it is time for their next meal. They all appear to be maintaining good condition. Therefore we are pleasantly surprise how well this emergency procedure is working out. What will happen with the operation when and if we receive a couple of feet of snow remains to be seen. Stay tuned!