My apologies to all of you who do not read Danish and who know nothing of “rugbrød”. I should begin this tale again, på engelsk, so that more can understand the good news.

Dear friends. A great event has occurred for us. For the first time ever we have rugbrød (Danish  rye bread) at the farm!

This year, 2015, will mark a number of milestones for us. In regards to this particular history, this year marks the 50th anniversary of my arrival in Denmark as a foreign exchange student. During the year that I lived with my Danish family, I, like all good Danes, learned the joys of eating rugbrød, a unique recipe for rye bread. Rugbrød is a key element in the everyday diet of Denmark. Unfortunately, it is a bread that was unavailable in the USA upon my return here 13 months later. In the subsequent 49 years it has remained just as difficult to find here. Perhaps if one lived in a community with a strong Danish immigrant population and heritage, one might find it in a Danish bakery. I have not been lucky enough to live near such a place. One of my simple but special joys of returning to Denmark in 2005 was that I once again could eat meals prepared with rugbrød. And so it has been every other year since 2005, when I have returned again to Denmark, that I have a brief opportunity to enjoy the bread.

One might ask, “Why don’t you just bake some homemade rugbrød?”  In the days before the creation of the internet one could, with patience, find a recipe in this country for rugbrød. However, this was not a complete solution, because certain key ingredients were also not readily available. As a consequence, the notion that we could bake rugbrød was totally forgotten. But times have changed. This fall I received as a gift, a book, Eat Smart in Denmark, by Carol and Katrina Schroeder. Among other things, the book contains a rugbrød recipe. After all these years we decided that we should try to track down the necessary ingredients and have a go at baking the bread.

The first hurdle was to find an appropriate pan. With the help of the internet we were successful. The key ingredient that is difficult to find, at least in our rural environment, is cracked rye kernels. But “aha”, that too can be ordered over the internet. It was from this point however that the tale started to become unintentionally amusing. I thought that I had ordered 4 bags (1 ¾ pound each) of cracked rye kernels. When the box arrived in contained 4 cases (each with 4 bags)! There was no turning back, we had to succeed!

The recipe struck us as a bit large. Once we began we discovered that it was, in fact, very large. The baking process is a three day affair. On the third day when all of the ingredients were together for the first time, it barely fit in our large mixing bowl. We took shifts trying to blend everything together. It was fatiguing work. When finished, there was enough dough to 1) set aside a starter batch for the next time, and 2) to fill way more than the suggested two pans. Having only one of the required special pans, we place some of the extra dough in a glass bread pan. The remaining dough (which was still rising!) ended up in the garbage can. I had images of going outside the next day to find the garage roof raised by a giant ball of dough.

After the requisite baking time, we had what appeared to be at least one actual loaf of rugbrød. The loaf in the glass pan was baked solid. We submerged this brick overnight and were able, with much effort, to salvage the glass pan. Nonetheless, there was still one good loaf of bread, 14″ x 4″ x 4″. It looked like rugbrød and smelled like rugbrød. 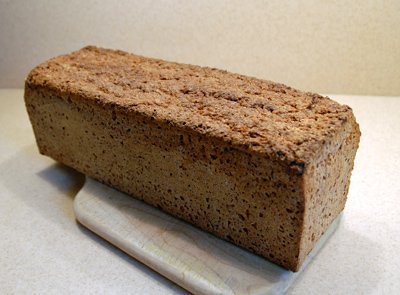 Even better, it cut like rugbrød (less than a ¼”thick), and, joy of joys, it tasted like rugbrød! 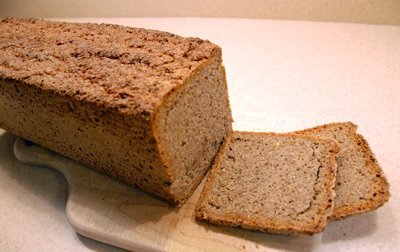 In the future, the process and recipe will need some fine tuning on our part. Nonetheless, we succeeded in creating a pretty good loaf the likes of which were missing on this side of the Atlantic for nearly 50 years.

Needless to say, we have been eating smørrebrød (open faced Danish sandwiches) ever since. The first loaf is nearly gone. It is nearly time to bake our second batch (the recipe will be halved!). And for sure, we have enough cracked rye kernels to open a rugbrød bakery.