Lots of things are going on at the farm and I am guilty of not getting around to writing about them. Hopefully I will get a bit caught up here. Perhaps shortly down the road, I will be able to add more. Spring has had a slow and staggered beginning. Yet finally we saw enough sunshine and felt enough warmth to believe that the weather had turned the corner. Many of the early migratory birds arrived on schedule. (In a few instances they were ahead of schedule.) One of the pleasures we have experienced regularly over the last few years has been in increase in numbers of Sandhill Cranes that have visited us. I can remember one of the first springs that occurred after we purchased the farm in 1983. I was exceedingly excited to see a single crane in the middle of what is now our main hay field. I had never before seen one. I grabbed my camera and added a telephoto lens and spent an hour slowly sneaking up on the bird. Much of the approach was done crawling across the field. The pictorial results were poor: a bird far off and very difficult to see. It was a number of years before I saw another crane on the property. Now, over the last few years the Sandhills arrive early in April and daily spend lots of time on the farm, often in small groups, bugling their presence. This year the numbers have been very pleasing. Toward the first of May we were greeted by a flock of at least 25 cranes in the middle of the hay field. They did not give me enough time to get good photos, but they provide a magnificent show, especially when they all decided to take flight. Our flock is nothing to compare to what can be seen along the Platte River, but they still give us an amazing  thrill! 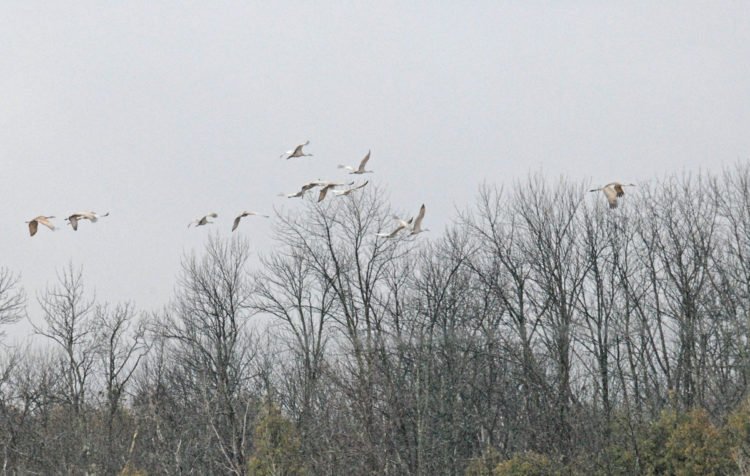 Closer to the house our Magnolia bush has been growing well since we planted it a few years ago. This year it performed a beautiful welcoming to spring. Beneath it grow an early blooming variety of tulip. This year they timed their blooming to perfectly coincide. 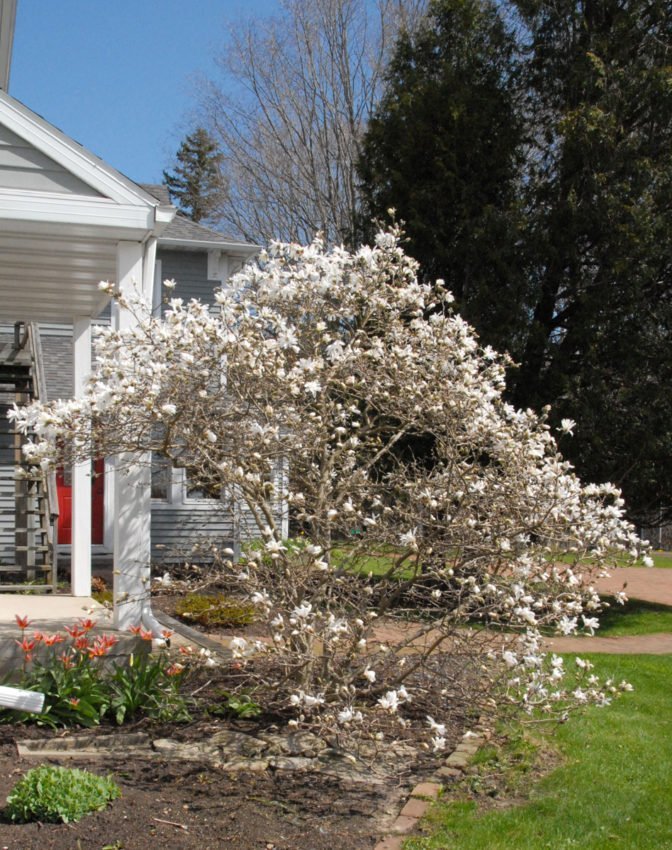 Sadly, after two glorious days of blossoms, we were hit by two nights of late frosts. It was cold enough to “burn” most of the Magnolia blossoms. Nevertheless, from a distance the bush/tree remained gorgeous. Now, over two weeks later, we have a lovely carpet of white blossom petals below the bush. We are hopeful that the hard freeze did not do significant damage to the cherry and apple blossoms in the county. We will have to wait to see if the fruit crop was harmed.

Going into late May (with the exception of the Ashes) almost all of the native deciduous trees have budded out and soon will have a full leaf cover. Pastures are growing and grazing sheep will soon be a regular routine.