Running to Get Caught Up

After a seemingly slow, endless Summer of heat and lack of moisture we have suddenly switched into high gear and rushed into Fall. The heat is definitely gone, replaced by overnight freezes. Unfortunately, the moisture component is still very much lacking.

So much is happening in such a short time that it is hard to keep up. I will give it a try. Of late, we have had an additional regular breakfast guest. This female Pileated Woodpecker has been spending a lot of time in the maple trees around the house. When she is just outside the window, one realizes her size is truly amazing. 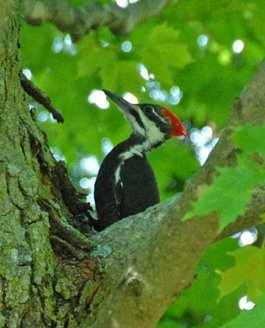 The instances of Pileated Woodpeckers visiting us have diminished over the years. I suspect that it is due largely to the subdivision of the large tracks of woods in our neighborhood and the resultant destruction of habitat.

As if they were trying to conjure up a flush of Fall colors, Gretchen and her friend Sandy had been busy dyeing yarn in September. Here is Pussa passing judgement on these skeins dyed with Dyer’s Coreopsis and Cota (Navajo Tea). They seem to complement her colors quite nicely. 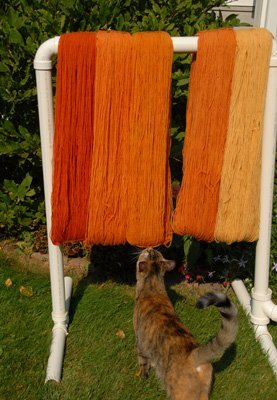 Mother Nature, not one to appear to out done, decided to show off her Fall color techniques. It has been one of the earliest and sudden Fall color transformations that we have experienced. I suspect much of it can be attributed to the very early spring leaf-out of the trees, followed by the extreme dry conditions of the entire Summer. At the beginning of the last week of September, the trees were nearly all still green. That week the sheep began grazing pasture #3 (the extreme southeast corner of the farm). In a normal year it usually takes 10 to 11 days for the flock to work from the east end to west end of that pasture. This time we had to give them bigger sections to compensate for the lack of dense forage. It took them only 7 days to finish off the pasture. On the 29th of September they had their last day on #3. As can be seen, in one week the trees at that end had already started to fill with colors. 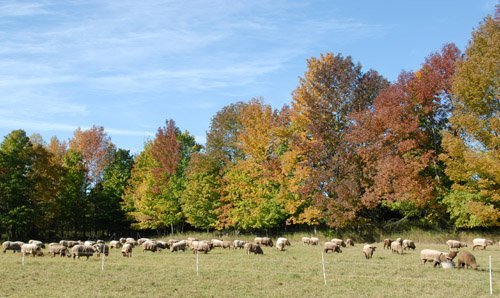 The next day I returned to take down the movable fencing in #3. Within a day the transformation of color had accelerated. This image was taken in the afternoon of September 30th, about 30 hours after the previous picture. 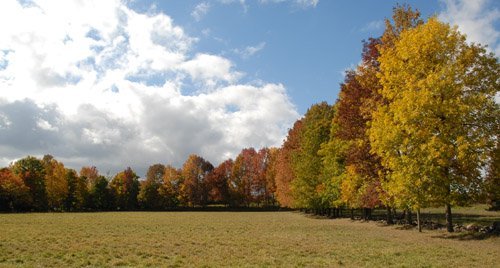 Here is the view from #3 looking back to the barns that same day. 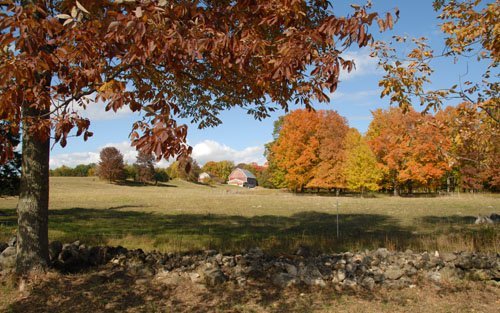 Now, not even a week later, the colors are spectacular. If the strong winds that we are experiencing today continue for another day or so the leaves will soon be off the trees! 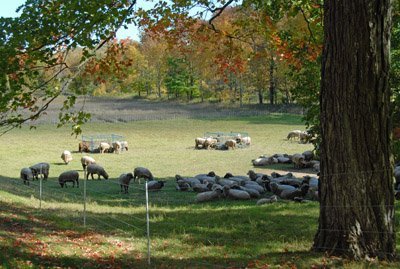 The flock is now on the small pasture, next to the road and behind the barns. We are feeding large square bales of hay. This image was their first day on this pasture since mid-Summer. After the first day, the green hue had been removed. None of the pastures have come back during the last month; the grazing season has effectively ended. The flock will remain with large bales on this pasture for the rest of the Fall. It is now a “sacrifice pasture”, i.e. it will be over-grazed and over-fertilized. Hopefully, next Spring we can recondition it, depending upon sufficient snow cover and adequate Spring rains.

It will be interesting to see if we move on into Winter at this rapid pace. One of our harbingers of Winter is the arrival of the Dark-eyed Juncos. Usually they move in from their northern territories around the second week of October. The first Junco we saw this year was on September 27th; they arrived in force!