A number of folks have asked about the large drifts of snow from our big storm of the last week of March and whether they have since melted away. The good news is that over about a two week period the snow had slowly disappeared. In fact, for a couple of days Mother Nature acted as if she would finally bless us with spring weather. Silly of us to think that! It was not to last for long. We have now had two additional heavy, wet snows. Now have not equaled the last March storm, but the ground has turned white again and again. As soon as one had melted it was replaced by the next. This was the scene that greeted us yesterday morning. 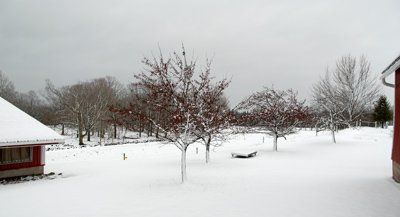 Where is the pasture?

Temperatures have not aided in rapid thawing and melting so somewhere below all that white stuff there may be green grass, but it is certainly difficult to find. We are thankful that we do not need to do any spring planting. There has been virtually no field work done by any of the farmers in the county. Once the snow is gone the fields still need to dry out. We can fuss a lot, but we are blessed to not be faced with the destruction of earthquakes, tsunamis, tornadoes, wildfires and war.

The sheep are eager to get out. We can sense it. We still have a good supply of hay stored in the barn, so it would seem that the entire flock is faced with the same menu for a few more weeks. The vegetable garden is also still white. Underneath the snow is a pile of composted sheep manure waiting to be worked into the soil. For the moment we will just have to look at the seedlings on our plant table and imagine them in summer glory. This bunch of tomatoes, peppers, egg plants and artichokes still have a long way to go. Right now they will have to satisfy our search for green! 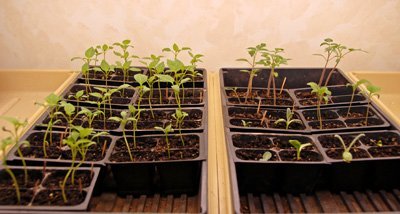