It is difficult to believe, yet it has been a week since we finished shearing the flock. So much happened in preparation for the two day event that it now seems a blur. In two days 126 sheep were shorn. Since then the pace has not slackened. Gretchen is busy with the final skirting of the fleeces. And of most importance…in  a couple of days lambing begins.

Pre-shearing – In the week that preceded shearing we were faced with ominous weather. Snow storms followed snow storms and the temperatures were below normal. Consistent overnight lows were just above 0°F  (-18°C); the highs struggled to reach another 10F°. It was not ideal weather for shearing. The prospects for warmer temperatures after shearing were also poor. At least our volunteer help managed to arrive between storms (Helen and Russ from Atlanta, GA and MJ from Madison, WI). Thursday afternoon Dave, our shearer, pulled in from east central Wisconsin with the next blow right on his tail. No sooner had he gotten his equipment unloaded and into the barn than it started to snow. By Friday morning we had 10″ of snow; it was cold; a bitter north wind was blowing. We managed to get the barn shut down as tightly as possible. The sheep, of course, were still quite comfortable with their full fleeces. Their warm bodies managed to keep the lower level of the barn in the mid 30°F range overnight. Those temperatures are still not ideal for shearing as the lanolin in the wool is not nearly as soft as the shearer would like. The wool is thus more difficult for the blades of the shears to cut, resulting in more work for the shearer.

Shearing – Friday and Saturday did not warm up, but we had no choice but to proceed as Dave had other jobs scheduled. We penned the flock tightly near the shearing area so that they were easier to catch. I caught the sheep; Russ and I moved each to the shearing area where we removed their coats. We would then turn them over to Dave who would proceed to shear each sheep in just a couple of minutes. 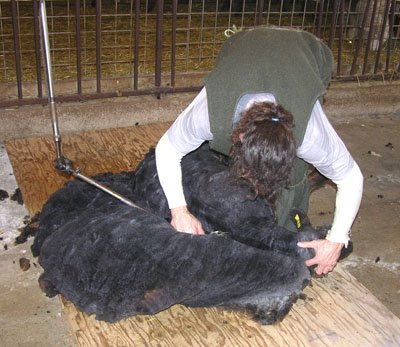 The belly wool comes off first and is separated into a “belly” bag. Once the sheep was shorn she got to return to the main pen where a hearty breakfast awaited her. Gretchen and MJ scooped up the fleece and placed it on a skirting table where the dirty edges and contaminated wool around the head and butt were removed. When the fleece is finished it gets placed in a separate bag with a tag that identifies the “producer”. The nicer wool from around the neck area, which is not covered by the sheep’s coat and which is contaminated with some vegetative matter, gets placed in separate bags by shade. Eventually we will send it of to Blackberry Ridge Woolen Mill, where it will be washed, cleaned, carded and spun into yarn for us to use or sell. Simultaneous with the skirting, Helen was sweeping up the small cuts of wool left in the shearing area so that they do not contaminate the next fleece as it is sheared. She then also cleaned the area around the skirting table for the same reason. As soon as Dave’s shearing area was clean we would have another sheep ready for him to shear and the procedure would begin again.

On Friday we managed to get all of the presumably pregnant ewes sheared, plus a few of the “old ladies”. The shearing total was 80 for the day. On Saturday we began the routine a little later than the previous day. We had 46 sheep to shear that day: the rest of the older “open” ewes, last year’s lambs and finally, the 8 rams. Needless to say we all were tired after shearing was over. Gretchen had prepared a bounty of food for all of us. It was well consumed.

Post-shearing – Saturday afternoon I was able to clear a path through the snow for Dave’s van. On Sunday morning he was off to another job. The rest of us got the barn re-organized and as comfortable as possible for all of the naked sheep. They were all cold but not excessively so. Everyone of them continued to eat well. In fact their hay consumption is up, as expected: more fuel for 126 sheep furnaces. 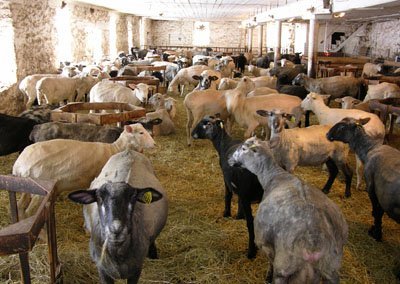 During the next couple of days the rest of our crew departed for their homes; again everyone managed to avoid any bad weather. Without their help we would have never survived!

Our next phase is just beginning. Each day we bring seven more fleeces into the heated basement, where they are spread out on skirting tables to air dry. Here, under good light, we can perform a final skirting of the fleece and prepare it for sale. Seven fleeces are the maximum for which we have space at one time. Simple mathematics will tell us that under the best of conditions we will have all the fleeces finished after 18 days. “Simple mathematics” does not consider that it is only 12 days between the last day of shearing and the first scheduled day of lambing. If life proceeds “normally” we will have a couple of lambs born a day or two early. In any case, the fleeces will not be ready for sale until lambing is over and we have had a moment to catch our breaths. Anyone interested in purchasing fleeces should look at our web sites Fleeces page for further instructions. For those already on the notification list we appreciate your patience. 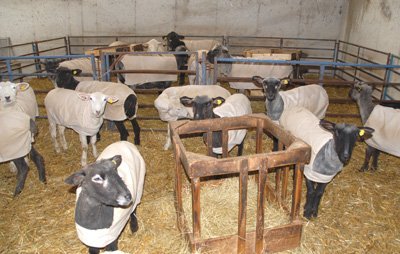 We have also begun the lengthy task of washing all of the used sheep coats. The rams and all the ewe lambs have already been fitted into smaller (and clean) coats. Those two groups have now been moved back into the barn addition which will keep them out of the way and mischief during lambing. At chore time during the week we are also re-coating the open ewes. The pregnant ewes will not be coated again until they have delivered their lambs.  At least by mid week after shearing the weather has moderated. It is warm enough to melt lots of snow and to open up the barn for better ventilation. Now if it would just stay that way throughout lambing….