Shearing, Lambing and other Flock News

Hello everyone. This is Queso writing. Those of you with good memories will remember me as the official flock photographer. Some of my flock mates also refer to me as the “sheep geek” (which I take as a compliment). Nanoo Nanoo has asked me to write a flock update for her. I am not much of a writer, but Nanoo Nanoo promised to proof this for me before I hit the “Publish” button. She has been a bit under the weather recently, but she seems to be getting better. That is good news, since all of us in the flock are always concerned about each other’s welfare. The shepherd guy and the nice lady have been fussing over her a lot too. You can tell they are concerned too: the bearded guy isn’t nearly as grumpy as he can be and the nice lady is being even nicer.

The first bit of news is that we all got sheared, just over two weeks ago. We suspected that it was coming, ’cause the  shepherd guy got busy cleaning out the area where we always get sheared. Then these other people we recognized from previous shearings, all of a sudden showed up together. I guess it all went well. At least a lot of us can see better, and the pregnant girls are happy to not be trucking around quite as much weight. It wasn’t too cold and the shepherds have kept the barn warm for us and upped our rations. The nice lady has apparently been busy sorting, skirting and processing our wool. She seems to mumble a lot about the work every time we see her. Of course, both of them do a lot of mumbling about how tired they were when shearing was over and how they don’t have all the energy they once had. They should try being in our hooves sometime!

A few days after shearing and all the equipment was gone again. We all had to gather together one day so that we could get our annual booster shots. (Some of us are better about that than others, but I won’t name names!) Believe it or not the shepherds were well enough organized that day that all of us who are not pregnant got fitted for new, clean jackets. That was kind of cool. Usually it takes them until lambing is nearly done before we are all dressed again. So here’s a picture I took of us during breakfast a few days ago. As you can see there are lots of us in our coats. 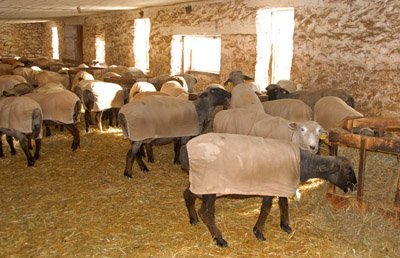 As I said, the pregnant girls get to go around without coats until a couple of days after they have their lambs. There aren’t as many of those ladies this year…only 34 by my count. I am told that this is another one of those “take pity of the aging shepherds programs”. In other words, they don’t want to work as hard as they used to do. I am pretty sure that the shepherds think that the lambs will be arriving soon. This morning they hooked up the “baby monitor” in the barn, something they always do before lambing. So we now have to be a bit more careful about what we say down here in our barn. The computer junky in me makes me want to juice up the power on that unit. If I could achieve that, I bet all the neighbors could listen to us on their radios whenever they wanted. (But I am digressing into techy stuff…sorry about that!) So, just to confirm that the shepherds are correct about lambing being near, here is the scene around the breakfast table this morning. If you can’t tell that these gals are due soon then you better go back to school. 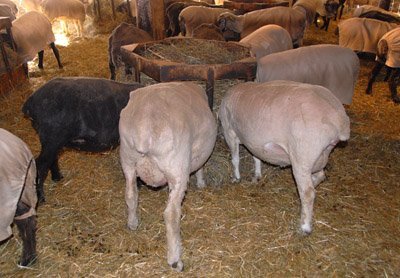 What I can tell you is that we, in the flock, know pretty much exactly when the lambs will be arriving. We just don’t share that privileged information with the shepherds. But I do have permission to relate that lambing will begin on March 7th and should be over by March 26th. This of course assumes that some of the gals don’t become over-eager to get started or that some of them manage to keep their legs crossed.

On a sadder note, we lost one of our senior members yesterday. Rhett, who was our oldest ram passed away. He was such a handsome guy right to the very end. He spent the winter schooling the three ram lambs, a bit more peaceful environment that having to rumble with the  three other big guys. He got to spend the fall with a breeding group as he always has. I do know that he managed to successfully breed every ewe that was with him. That has pretty much been his history all along. In the last few years he mellowed down considerably. He was a favorite with the shepherds, and even though he was a ram we will all miss him a lot.

I can also tell you that we have had two major snow storms since shearing. It is the first time all winter that we have seen so much snow. I am glad that we don’t have to be out in it right now. It is sort of strange looking out the barn windows and seeing lots of snow. We get kind of used to it in January, but it gets a bit “old” when it happens in March. As you can see I am writing about the weather. That is probably a sign that I have just about expended the last of my literary potential. I better get this approved by NN, the editor in chief, and see if she feels it is suitable for publishing. Thanks for sticking with me on this!