March is now history and it was an eventful month for sheep, our flock and Whitefish Bay Farm. First off, distant French cousins of Whitefish Bay Farm’s sheep produced the milk for this year’s World Champion Cheese. The cheese is known as Esquirrou and is crafted in the Pyrénées region of France. We are always happy to see good sheep cheese receive high praise!


On a very sad note, Knuthenlund Farm, my favorite Danish farm that produces truly wonderful sheep cheeses from their beautiful flock of over 300 ewes, has been forced to close and sell. Under the new owners the farm will remain one of the largest organic farms in Denmark, but the flock of milking sheep and herd of heritage breed Danish Red cows are gone, as is their on-farm cheese making facility. It is truly a great and sad loss for Denmark and quality food production. I was blessed to be able to visit them over the last few years. I will dearly miss them!

Back here in Wisconsin, we experienced brief periods of warmer weather during March. With the warmth has come the slow but steady influx of spring migratory birds. Sandhill Cranes made they first appearance at almost the first of the month. More recently, during morning chores, we were treated to the bugling of a Sandhill coming from the lawn just outside the barn. Bluebirds and Meadowlarks have made their first appearances. More recently Fox Sparrows, Song Sparrows and Turkey Vultures have returned. Hopefully, the Barn Swallows will hold of on joining us until we can keep some of the barn doors open for their comings and goings.

A few days ago we assembled our shearing crew and managed to successfully get all of the flock sheared over the space of two days. As always it is a very intense period for all of us, sheep included. This is the scene in the barn, with all the sheep assembled on the first morning of shearing. 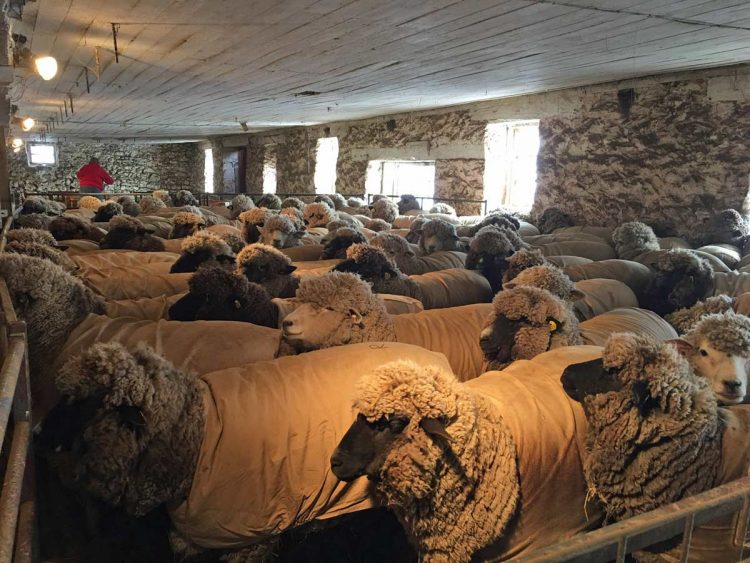 As usual I had the job of “selecting volunteers”. Some of the girls were more willing than others to step forward! Larry helped me remove their jackets, while Dylan was busy shearing the sheep that we had previously caught. 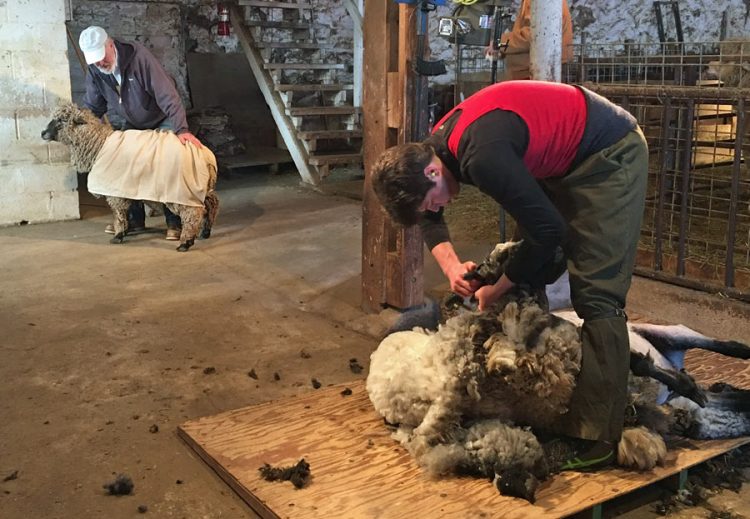 Below is a view of Windy just about finished with her shearing. As usual she is always very cooperative, and that shows both in terms the quality of the final product and in the speed in which the job is completed. 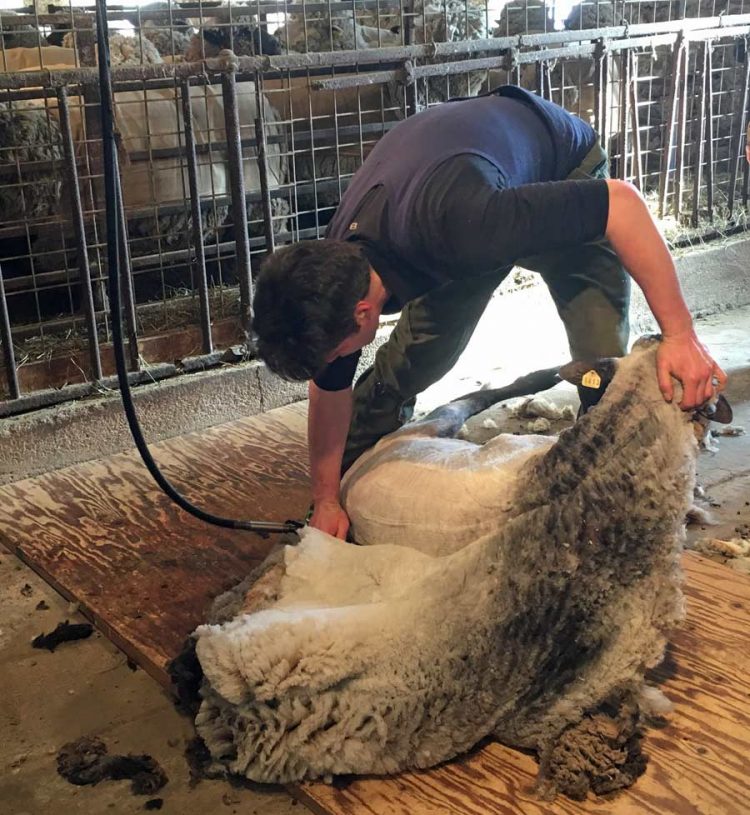 Once Dylan has completed shearing the sheep, she is released and gets to eagerly begin a delayed breakfast. In the meantime, Gretchen and MJ gather up the fleece and throw it out onto the skirting table, which is just to the right in this image. Once the fleece is on the skirting table, Savannah would sweep up and bag any of the small scraps of wool on and around the shearing board, thereby assuring that the fleece is not contaminated with any undesirable material. At this point I am ready to pass the next sheep to Dylan, who can then start shearing again.

While another sheep is getting sheared, Gretchen and MJ are skirting the previous fleece. This involves removing the poorer quality wool usually found on the legs, bellies and topknot. The two of them need to work relatively quickly since they need to have the fleece off the table before the next sheep is completely shorn. 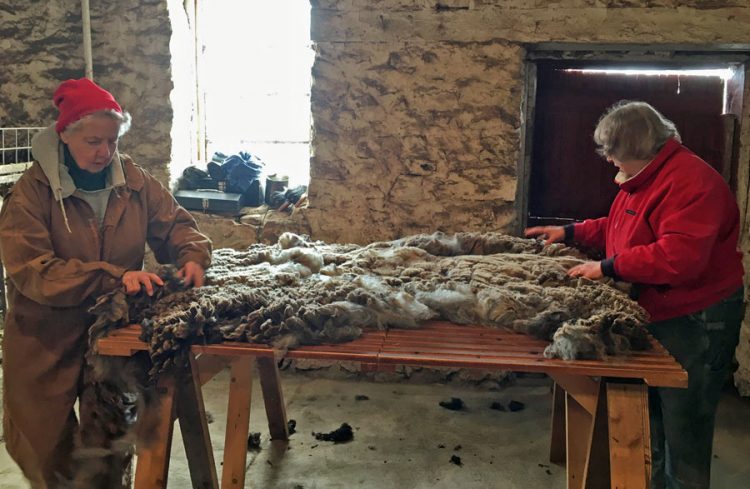 When they have finished with the skirting process, the fleece is carefully rolled up and then bagged. 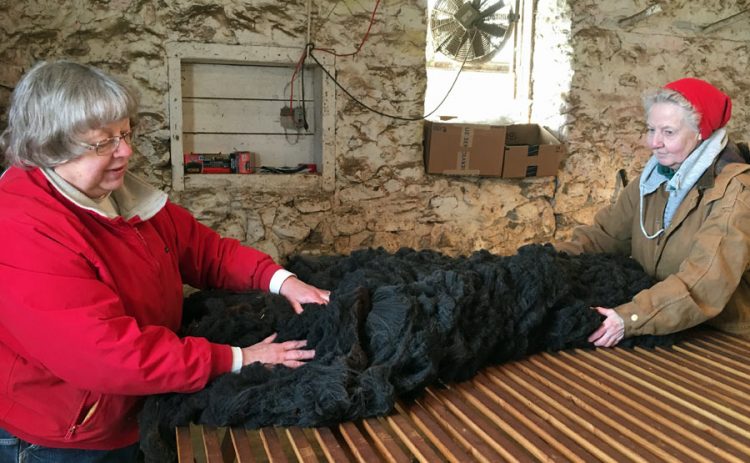 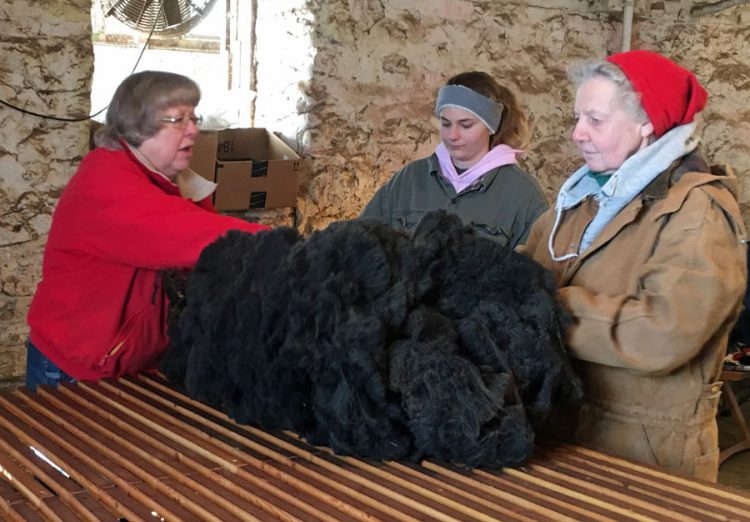 At the end of each day all the fleeces are moved upstairs into a swept area of the hay mow. Then, once we have recovered from the events of the shearing days, the skirted fleeces will find their way to our basement, five each day. Here they will air out and dry a bit, and then the next day Gretchen will do a final more meticulous skirting. Once that is completed the fleece is ready to be weighed and evaluated for price and then ready for sale.

Once shearing was completed on Sunday afternoon, the group of us assembled for our “collective mug shot”. Everyone is here except Larry, who volunteered to take the photo. I would also be remiss in not thanking Sarah, Dylan’s wife, as she did an amazing job capturing the two days with an i-Phone camera, a job that none of the rest of us could have done since, all of our hands were almost always full. Gretchen and I wish to thank all of you for your tireless work! 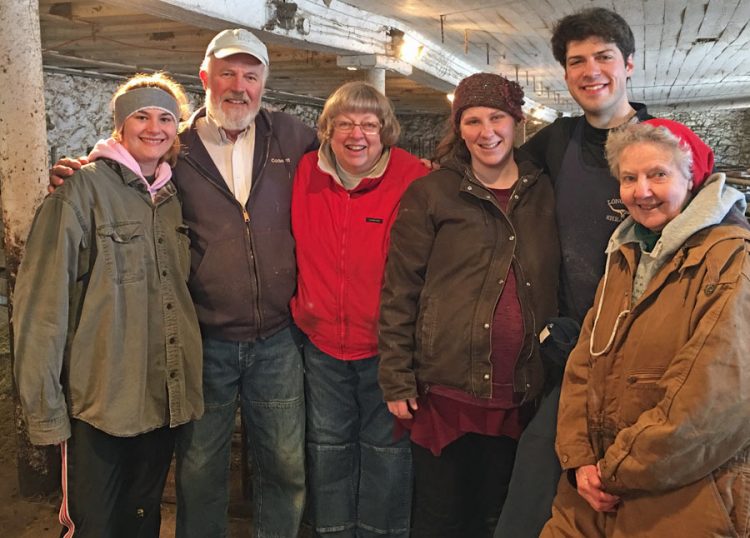 The day after shearing, all of the crew except MJ had left. The three of us spent Monday getting all of the flock fitted with clean jackets, usually 3 to 4 sizes smaller than they were wearing the previous day. The jacket are not terribly thick, but they do serve to provide a bit of warmth and resistance to any drafts. After each sheep has its new jacket they also receive their annual tetanus and clostridial disease booster shots. Hopefully with warmer weather and green grass they are good for grazing!

As I write, Gretchen is busy with the basement stage of fleece skirting. Hopefully we will be done in a few days. When we have completely finished with the fleeces we will be ready to schedule our annual online fleece sale. If you purchased a fleece from us in the last four years or if you signed up to be on our mailing list during the last 12 months you should receive an email from us in early to mid April. If you are not on our mailing list but wished to be added, please send us one of our Fleece Contact Forms. You will be hearing from us soon!