It has come to my attention that the old bearded shepherd has been derelict in his duties this summer. Not only has he failed to regularly let all of you know what has been happening on our farm this summer, but has short shifted the flock when it comes to sheepy news. So I, Nanoo Nanoo, must step to the fore and get all of you up to date. Maybe that will jar the old guy into some further action. I probably should not be too hard on the him. After all it has been really hot most of the summer and we have seen him sweating bullets many a day, especially when he has been trying to make hay bales. But he should expect that. It comes with the territory and it is spelled out quite clearly in his job position. But if he thinks that this weather has been tough on him he needs to refresh his memory that we sheep have toiled through this hot, humid stuff also.

Currently we are grazing out on what the shepherds call the ” big hay field”. Of course we all know that that ground really stretches from the End of the Earth on the south side to the mysterious territory the cranes fly over on the other north side. We still believe that Denmark is actually just on the other side of those woods. We are just a couple of days away from reaching the northern edge. Queso believes that maybe we will be going on holiday to Scandinavia soon. Personally I think we are just going back to our usual old pastures. It has been nice out here. We usually seem to get out here in early fall but I think we are here now because there has been so little rain that not much has grown in any other parts of our pasture.

I thought that I would introduce you to some more of the flock or at least give you some news about them. This is a picture of Whirlwind. She is one of Raine’s daughters. Last fall she decided not to get pregnant, so quite obviously she did not have any lambs this spring. Last winter in the barn she spent a lot of time sucking up to the shepherds and anyone else who might show up. I personally think that she has been in training with Queso to become an assistant greeter. She will probably be pretty good at that if she keeps at it! Also she has certainly perfected the skill of getting nose prints on camera lenses. 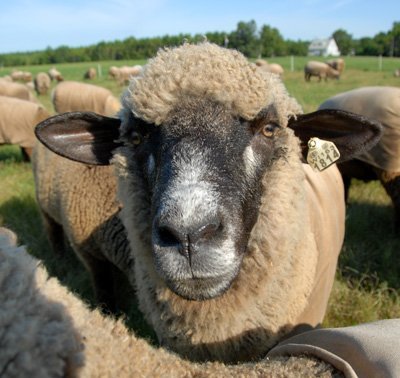 Some of you may remember Zuzanna from last year when she was a lamb. Here is how she looked then, before they fitted her for her coat. She is sort of different than most of us, but she is still nice. The shepherds call it “Moorit”; we just call it “Brown”. It is a pretty rare color for us purebred Corriedales (at least in this country). 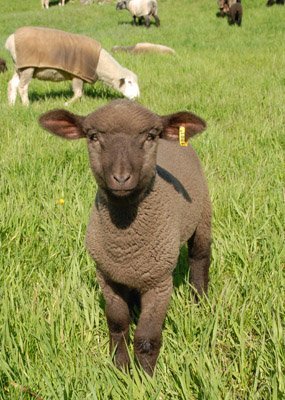 Zuzanna as a lamb

Apparently the shepherds have been using her lamb picture in the publicity that gets printed here for the farm. Lots of people who visit the B&B and then come on the tour to visit us ask which one she is, because they saw her picture. Now the rest of us could get jealous of all that attention, but we sheep are not that way. I must admit that Zuzanna handles the extra attention pretty well. (She does have this strange habit of wagging her tail when someone scratches her under her chin. I am not sure what that is all about.) Here is what she looks like now, almost grown up! 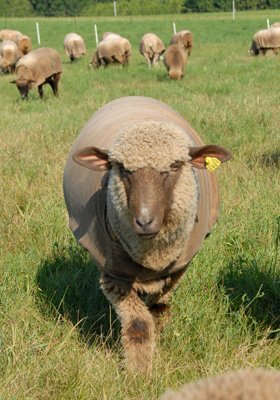 In other recent news, we nearly all got fitted for larger jackets the other day. It is amazing how that wool just keeps growing! It is nice to have a bit more room again especially during the warm weather. Things are a bit lonely in the barn. All of the swallows left a couple of days ago. One family stuck around for one extra day but now they have departed.

Hopefully this just about brings all of you up to date. Just remember that you need to make a ruckus if the old grumpy guy falls down on the job. We will get after him. And if you don’t hear from me in a while it will be because Queso was right about our being on holiday!