I should have figured that something was afoot in the barn. The old shepherd guy was spending much too much time down here with us. (If you haven’t guessed it already, this is Brie, reporting from the barn for the flock.)

First, we figured the old guy was here because of the weather. Over the last month the temperatures have bounced from balmy to cold. There is so much snow up against the barn that when it warms up the melting snow tries to flow through parts of our place. The old guy was busy trying to make sure we kept dry (which was nice of him!). That’s why we weren’t too surprised to be seeing lots of him. Then he started getting either grumpy or fussy or both. He spent an entire day just shoveling a path from the door out to the manure storage, all the while mumbling about how there was too much snow on the slope to even get the skidloader anywhere near to help. Then, lacking his mechanical help, he spent three days shoveling out the bedding in the lower portion  of the barn. That’s when the veterans knew that something was up. They started whispering about “shearing”, not that we youngsters understood.

Once the lower part of the barn was squeaky clean, the shepherds moved in a large flat board, a slotted table and all sorts of other stuff. The next day a bunch of strangers started showing up in the barn. Before we knew it these people herded us into a pen next to the cleaned up area. Over the next two days we all got sheared. Here’s me, in with the rest of the girls, waiting for the the inevitable. 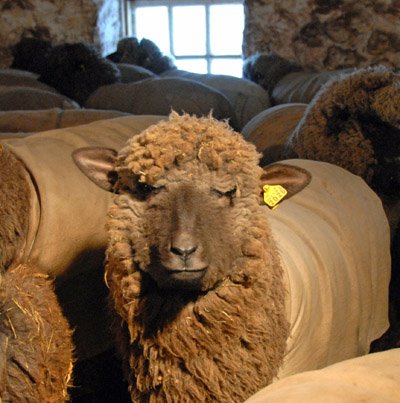 It soon became apparent that the old shepherd was first taking each of the pregnant girls out of the pen for shearing. That was nice of him, because those girls are getting a bit uncomfortable. That took the entire morning and into early afternoon. Once they were finished with each of us, the ewe got to eat breakfast back in the main pen, while the rest of us watched and waited. Later in the afternoon it was my turn. I didn’t exactly know what to expect, but it all happened so quickly I hardly had time to think about it. The shearer treated me nicely and gently, but he also didn’t give me an opportunity to object. So here I am, just getting started with my first ever shearing. 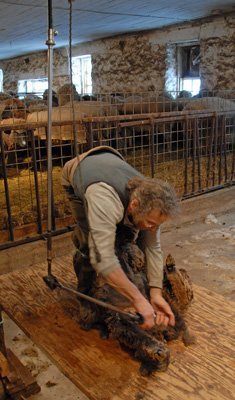 Before I knew it I was a few pounds lighter and headed for a late breakfast (or was that brunch?). I briefly caught a view of the nice lady shepherd and a friend picking up my fleece  and elegantly throwing it out on the slatted table next to where I was sheared. I had seen enough and got the heck out of there (I was hungry too!)

Later on, after I had eaten, I watched them do the same thing with the next fleeces. Up on the table the nice lady and her friend proceeded to pull the dirty wool away from the main fleece. Once they were finished they had the best of my wool all sorted and in a bag with a label that said “Brie”. The wool that had some hay mixed in went into a separate bag (they said it was for “machine cleaning and spinning”) and the wool from my legs and belly went into the “garbage bag”. Anyway, here’s what my fleece looked like on the table before the two ladies went at it. 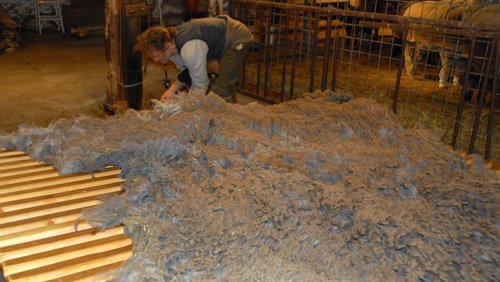 By the time they were working on my fleece, the shearer was busy shearing another one of us. This went on for the better part of two days. Two days after that we all got our booster shots. Those of us who are not pregnant even got new clean jackets. Now they are finished; all the extra folks are gone: life is back to normal, sans fleeces. (I am sorry, but there are no pictures of me post-shearing. I am, after all, just a bit modest!)

It was nice of the shepherds that they waited until the weather was not so cold. Even so, it took a couple of days to adjust. They have made it as comfy as possible, and closed up the barn enough so that the next snow storm didn’t blow inside. As you may have heard, there are a bunch of the girls who are pregnant. Without their full fleeces you can really see who they are. Rumor has it that the new lambs will begin arriving in a little over a week. By the sounds of it, that means that we will be seeing a lot more of those old shepherds in the very near future. That’s about it for now.