If you live in northeast Wisconsin I do not need to tell you that September and October have been exceedingly wet. For those of you who live elsewhere I will hopefully describe what has been going on here. In the 47 days since the 26th of August at the farm we have experienced 22 separate days with measurable rain. In that period we had only one run of 5 days without rain; the next longest “dry” period was 2 days! I do not know what our total precipitation for the year has been at the farm, but I know that Green Bay broke its all time annual precipitation total in mid-September (and that is with nearly three and a half months still to go!) By the way, their previous record year was last year.

All the rain has made grazing a difficult task for the flock. On so many days they stayed in the barn where we fed some of our winter hay. On days when they could get onto pasture, the forage was often wet and the ground soggy. I had to play a delicate game of making sure that the ground was not so wet that it turned into mud with too many hooves grazing on it. Nevertheless we are coping. So rather than continue any further with a narrative of the frustration of wet weather I will try to look at the sunny highlights that popped up occasionally.

Our gardens have for the most part prospered. As I wrote last time, Gretchen’s flower gardens have been especially beautiful. With a few exceptions the vegetable garden has also done well. Our only major disappointment has been that we did not get as nice a crop of artichokes as usual. Our melon crop developed later than normal, but was truly impressive toward the end. In addition to the vegetables in the garden we also grew some of our dye plants around the edges. 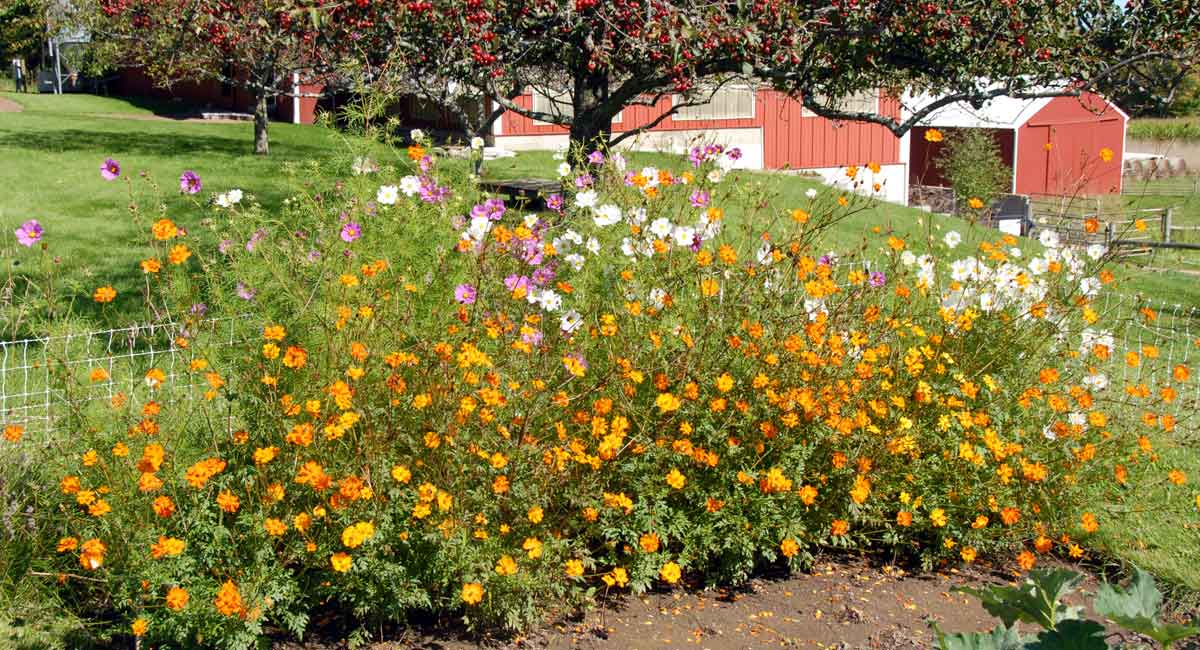 On one of the sunny days this is the cosmos patch after I had harvested the last set of blossoms for the year. The orange cosmos yield a lovely orange dye while the white and purple flowers produce a beautiful soft yellow. One of our freezers is now stuffed with bags of cosmos blossoms, along with an equally large quantity of marigold blossoms. We had hoped to do a lot of dyeing this fall. Unfortunately that will have to wait, not because of the weather, but because our white yarn has yet to return from the mill.

Because of the abundant moisture our pastures have also grown more vigorously than usual. As a result we had to bypass some of the pastures in order to assure that the others got properly grazed. The sheep are creatures of habit and seem to know the normal pasture rotation. So when we bypass one of the pastures confusion can occur. We were able to mow and bale hay from pasture number #3. As a result, the first time the flock set foot on that pasture was September 17th. Pasture #3 is in the extreme southeast corner of the farm. It is a good quarter of a mile hike to reach it. For the first few days the flock just assumed they should make the “normal” right turn off of the first pasture and head up the hill into the “orchard” pasture. Instead of following behind them I found that I had to walk around the entire flock and lead them past that turn off and another into #2. Eventually we got things straightened out, but there were some memory relapses, even on the last day going out to #3. This is the flock heading out at sunrise on October 10th.

They did just fine on this first leg until they got to this point (which happens to be where the path branches of to the “orchard”). They waited until I worked my way to the front. Then we were ready to go again. This is Vespera following me and leading the rest. 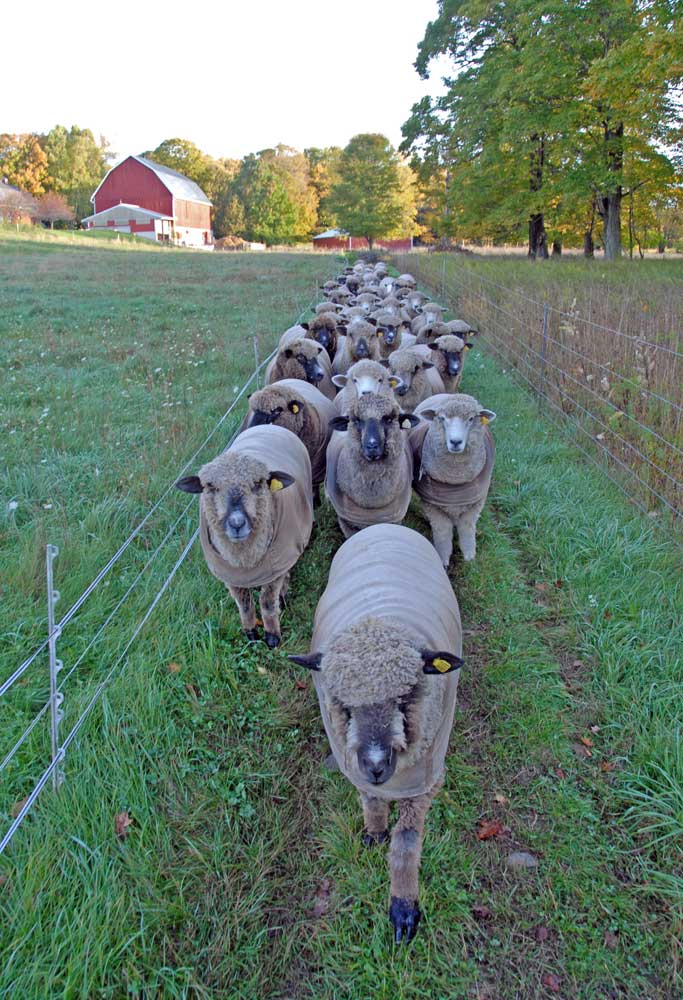 I was still in the lead all the way around the edge of #2 until we finally made it through the gate into #3. At last the goal was in sight and I had to step aside in order to not get run over. Since this was the last day on this pasture the flock needed to go to the very western end. They made that sprint in close to record time! 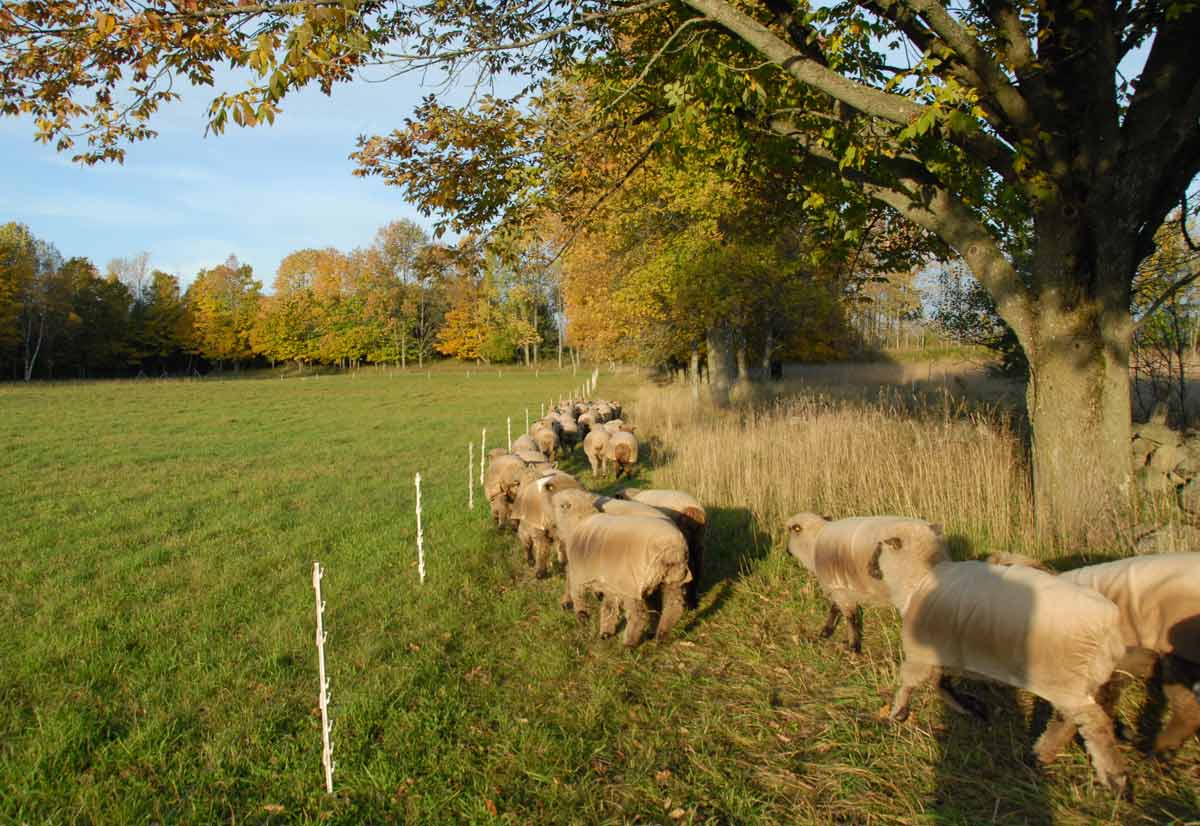 We did all make it to the end of the trail with each of us in relatively good shape. It was nice to see everyone busy with grazing almost as soon as they arrived. (By the way this was the last day of the one and only 5 day period without rain.) 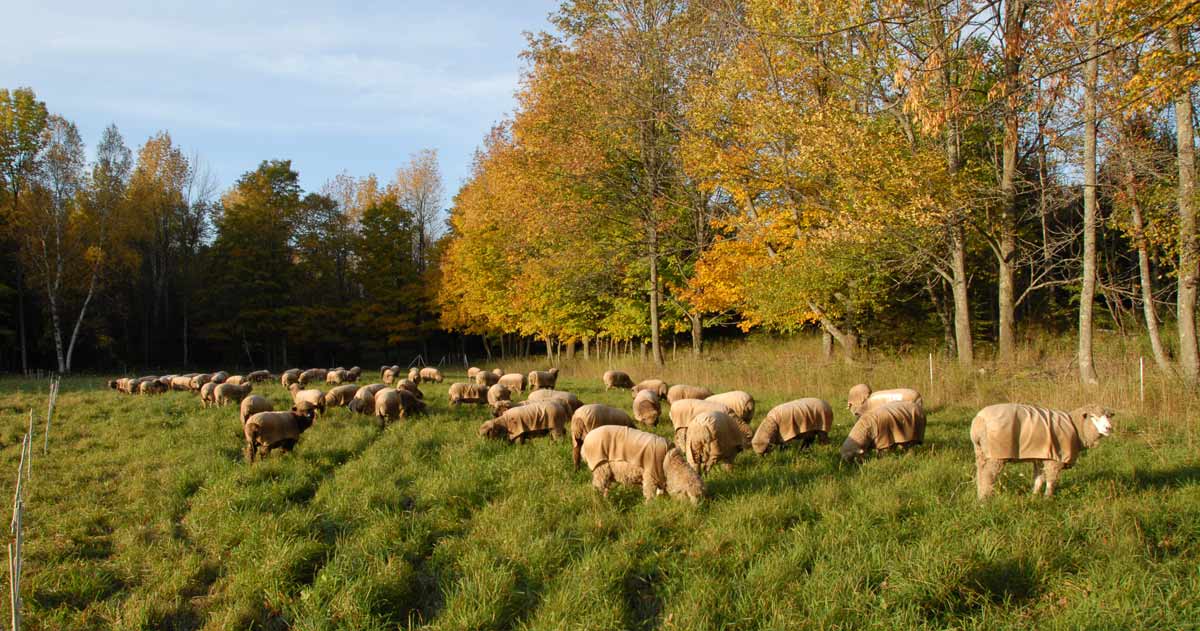 One of the atypical conditions caused by our weather is that the fall colors are quite mixed up. Some of our trees are still quite green, some have turned yellow (as they are at the end of this pasture). And some of the trees have already dropped all their leaves. On our farm we are seeing virtually no red fall colors this year. There also seems to be no rhyme or reason for the different conditions, i.e none of the species of trees are behaving uniformly.

The season is wrapping up very rapidly. The B&B will close for the year after next weekend. The same is true of the gallery, but we will continue to offer yarn for sale this winter from the house. The sheep will have a few more days on pasture. They will be out grazing when and if is not pouring rain and until the truly cold weather sets in and the waterlines to the pastures freeze up. I do not even wish to predict when that will occur. Until then all of us, sheep and humans, will be happy for any good grazing days!