I suppose that it is time for us to return to the outside world. Recently there have been rumblings of discontent from the barn. The popular notion has been that everyone there has become inpatient to get out onto pasture for the first time. Other theories are that they want us to make contact with their devoted friends and admirers. I will leave those two options for others to finalize the truth.

The Ewe Turn has been silent for a long while. The silence has not been due to ill-health or inactivity. It has been due to a seemingly endless parade of major tasks, most of which overlapped and often interfered with each other. Shearing set the tone for the upcoming events. As reported in the previous posting, shearing went well. We had delayed the shearing date in the hopes that the weather might be a bit warmer. Luckily it was warmer. We had also been hoping for warmer weather due to other circumstances. We desperately needed to get the house painted (hopefully before we reached the point where the B&B and Gallery were open). We also had scheduled for our furnace to be replaced (an event which hopefully would occur when we did not require much heat!).

Bob the Painter did get started in early April. The weather was not always kind or cooperative. In the early going there were many days where painting was just not possible due to low temperature, fog and/or wind. But now, in mid-May the job is nearly finished. Bob has finish his portion of the job (the lion’s share of the overall task). I am left with the replacement of some failing pieces of exterior door frames, which once replaced will need painting. We had the option of having that job done professionally, which meant replacing the entire door unit (which would have entailed major exterior and interior reconstruction). We opted for a less destruction but more tedious approach. I have been removing the rotting sections and replacing with solid patches which hopefully will not be noticeable when painted. One door is finished; I am close to finishing the second; the last one has yet to begin surgery. Overall, the house looks better than it has in a long time. (It was over ten years ago that Gretchen and I repainted the place.)

The painting project had (of necessity) to overlap the furnace replacement. The old furnace was the original oil-fired beast that we had installed when we rebuilt the house in the early 1980’s. 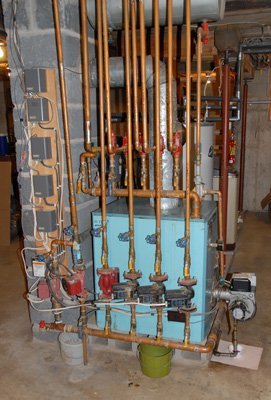 It had survived beyond its warranty, but it was become more difficult to obtain replacement parts. In addition, there were ominous signs that the boiler might be starting to leak. Unfortunately the furnace shared the basement with our major fleece sorting and shipping operation. We knew that the disassembly of the furnace would be a messy, potentially sooty job. We were forced to get all of our newly shorn fleeces skirted, processed and ready for sale before the furnace work commenced. We in fact hoped to have many of them sold and shipped before the sooty day. We almost made it.

The fleece shipping operation took over the living room and dining room. 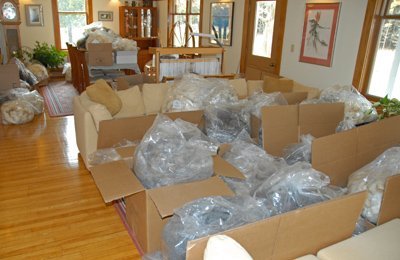 As of late April the two rooms were back to normal. Breakfast has been served to guests in the dining room. All of the purchased fleeces have made their way to their new homes. (As an aside, we have a nice selection of white and naturally colored fleeces that are still available for sale. They can be found on our fleece pages.) For a time in late April, the parking area was occupied by vehicles from the painter, the furnace contractor, the Fed Ex pick-up driver and a propane gas tank installer. As part of the furnace upgrade we purchased a gas fired high-efficiency unit. Since we had no propane tank, the back yard was dug up to install a line from the new tank to the house. For two days we were without an operating furnace. As fate would have it it was an abnormally cold two days. A fire in the wood stove kept us comfortable.

We still face major tasks. We started repainting the gallery exterior last fall. It is now one side and white trim short of being finished. The garden shed also faces a repainting, but not before I finish some structural repairs. The main barn is scheduled for a repainting sometime this summer. Very soon we hope to have the hay mow empty enough that we can jack up the main structural beam and replace the two failed support posts. To be able to begin that task also requires that the sheep vacate the barn so that I can clean out the winter’s bedding.

Thus this long-winded narrative has finally returned to the initially mentioned discontent in the barn. In order to get the sheep out of the barn and onto their regular grazing routine requires grass. Until this last week the pastures had not been deep and lush enough to tolerate grazing. In early May we finally received sufficient rain and warmth to give the pastures a good growth kick. I have managed to repair the usual winter damages to fence lines and the pasture waterlines. The left over grass load from 2014 also had to be mowed from underneath the electric fence so as not to draw too much current off the fence. As of yesterday, 18 May, the fence carried a good strong current. Grazing could begin! 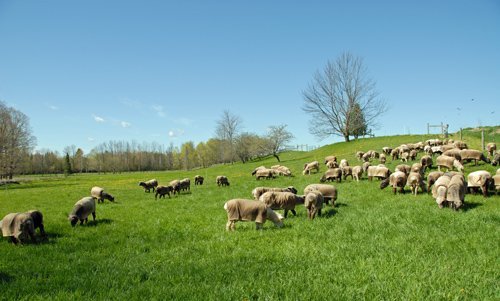 Everyone, except the four rams, are now on pasture. It was a very happy group that charged out the barn door yesterday morning. For Gretchen and me it was a bit of an unusual turnout. It was the first time since 1991 that we did not have to make sure that new lambs figured out how to go outside. There was no need to make sure that the new flock members knew about the electric fences. As much as we miss the lambs on pasture for their first day it was still a joy to see the adults enjoying their first day in green pastures since October. 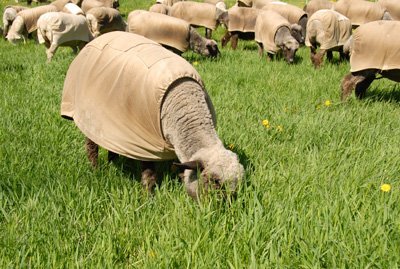 Much of the morning was spent either running up and down the hill or grazing with heads nearly buried in green grass. By the time everyone return to the barn yesterday evening there were some very tired sheep.

Ruby has now been through the first day of pasture for ten years. Fresh green forage still tastes very, very good. She has that look in her eyes! 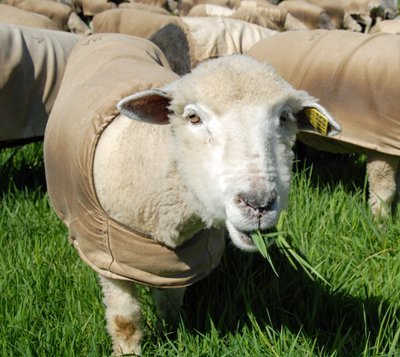