Our last lamb was born well over a month ago (April 11th to be exact). Unbelievably, we have completed the 30 day weigh-ins for all the lambs and are closing in on finishing the 60 day weights. So much has occurred within this intervening time. What follows will probably be a bit disjointed and rambling. Thanks for sticking with me! 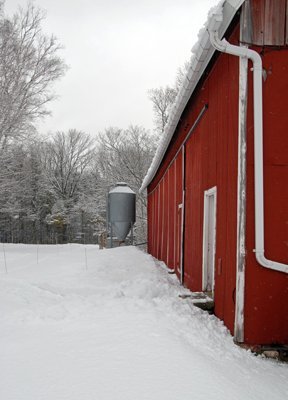 Mother Nature has toyed with us as far as spring is concerned. On April 13th she dished up a very heavy, wet snow storm. Our annual fleece sale was scheduled for April 16th. Luckily, the weather does not effect that event too much. This year we offered 124 fleeces for sale. It was a wild, crazy day for the two of us trying to co-ordinate emails and phone calls. The vast majority sold within the first few hours. Now, in late May, they are all gone! The first few days following the sale our time was occupied  getting fleeces packed and ready for shipment. It never fails: when we are tied down with inside work the weather turns beautiful. It was warm and seemed that spring arrived. It lasted only a few days (just long enough to get most of the fleeces on their way and possibly turn to outside work). It seemed and felt as if winter kept trying to return.

Gretchen and friends did manage to successfully get a significant amount of yarn naturally dyed toward the end of April. 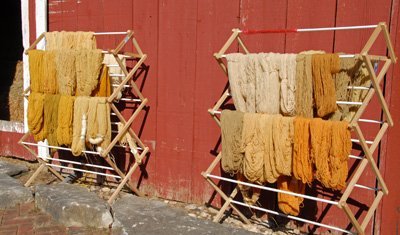 It was a task dodging rain and wind, taking advantage of a few bits of sunshine to at least get some of the yarn dried outside. 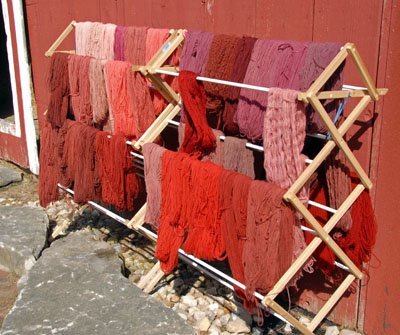 By the end of April the rain became serious. We collected a couple storms of much needed moisture. The temperatures were cold enough that the pastures just did not want to start growing. I managed to get one of the tractors hooked up to our tine harrow and at least find a dry enough period to get onto the portions of the pasture upon which I had spread our composed manure last January. Some of the clumps of manure needed breaking up. Once that was done, both the sheep and I could only look longingly out at the pastures and wish for warmth and growth. Instead we got another heavy wet snow storm on May 11th!

Finally, by mid-May we received enough warmth and sun to get the trees to start budding out and, most importantly, stimulate pasture growth. 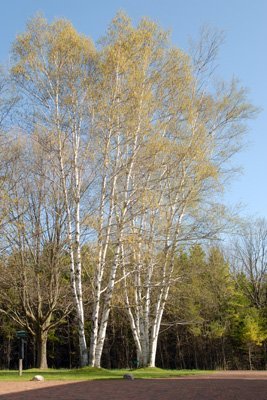 At this point I would guess that we are at least a month behind in the growing season. When we usually are able to start grazing we were dealing with snow. Finally…on the 24th of May the ewes with lambs were able to go out onto pasture for the first time. Two days later we let the remaining ewes join them. What a truly glorious happy group they all are. As usual, it is especially fun and rewarding watching the lambs explore the large sunny world for the first time. Now nearly all the flock is grazing. The wethers should join the rest in a day or so and then the rams can also get out into the lush green. 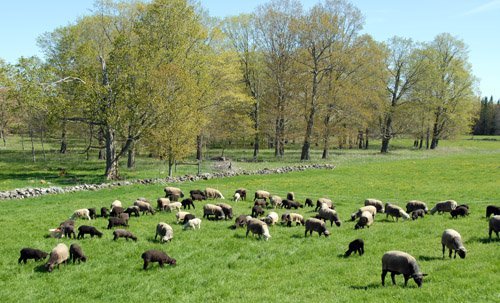 The first day on pasture…just the ewes with lambs

We have been very pleased with the good health of this years lambs and most of the mothers. Unfortunately we suffered one unexpected loss. Umeka came down with a sudden and very severe case of mastitis. Within a few days she was so sick that she could not be saved. She left behind a three week old lamb, Conchita. Normally it is very difficult to convince a lamb that old to drink from a bottle. We were lucky. She took to a bottle quickly. For a few days it took some effort to catch up with her as she did not associate me with food. Now she is my good drinking buddy and growing well on solid food and a regime of lamb milk replacer from a bottle. 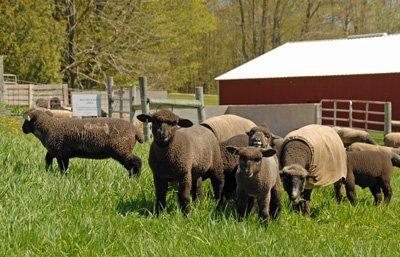 We had enough good quality second crop hay from last year that all of our lactating ewes have been eating it since the day they lambed. Their milk production is obviously good, based upon lamb growth. The lambs have also taken to the good quality hay at a very early age. As a result they are all growing rapidly. When we weigh the lambs, up through their 30 day birth date, we use a hanging scale with an attached sling. At 60 days we switch to a walk-in scale with a mechanical dial. (The scale is large enough for an adult sheep or shepherd). When we got ready to weigh the first lambs at 60 days the big scale was not working properly. I knew something was wrong when I weighed myself and it told me I was down to my svelte high school weight! It was time to buy a new dial (we went electronic after all these years!) In the interim, before the new scale arrived, we resorted to my lifting the lambs onto an old bathroom scale and then subtracting my weight. It was pretty accurate, but I am very glad that the new device arrive quickly. The heaviest lamb with the make shift weigh-in was Clyde at 77 pound. He is a brute! Overall our lambs, averaged .68 lbs per day over the first 30 days. (Clyde is averaging over a pound a day!) If anything, they are doing even better during their second 30 days.

No matter what the weather, the last weekend of May seems to be the time when the White-tailed Deer does begin delivering their fawns. At dawn on the 24th, as we awoke, there was a doe in the pasture, just outside our bedroom window, who obviously had just given birth. She remained there through early morning. By the time we had gotten the sheep out onto pasture, she and the fawn had disappeared. I should have known that something was up on the second day of grazing. A doe was surprisingly close to the first pasture as I set up the portable interior fence. I nearly stepped on the fawn (lying directly beneath the fence from the first day). After taking its picture, I finally had to give it a nudge to move it out of range of a soon to arrive flock of 170 plus ewes and lambs. The little tyke, all spindly legs, managed to take off into the adjacent maple grove. Later that morning we spotted the doe and fawn back together, back between the second and third pastures. 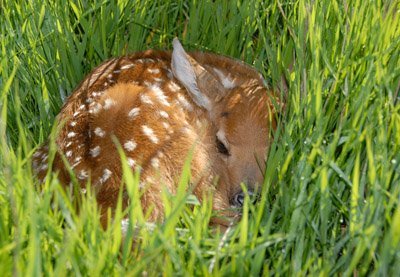 And by the way the bed and breakfast and gallery are now both open for the season. Spring is definitely here!