Getting back to a “normal” life is taking more time than I anticipated. But, as promised, I have returned with more tales from my journey to the Faroe Islands. Just working my way through the pictures is a daunting task. I would like to include more pictures, but I must be a bit frugal!

After spending most of my first five days on the Faroes on the island of Mykines, I returned to the larger islands, hooked up with my wayward suitcase with hiking boots included and then pressed onward. After spending a night in the capitol of Torshavn, on the island of Streymoy, I spent the day traveling north to the tip of the island and later crossed over a narrow channel to the equally large island of Eysturoy, to the immediate east.

My goal was to take as many of the small, single lane side roads as possible (and there are very few!). The day began with fog and heavy clouds and then eventually cleared to wonderful sunshine. My first side trip was up and down the long valley from the eastern to western edge of Streymoy. The small village of Saksun is located at the very western end of the valley. 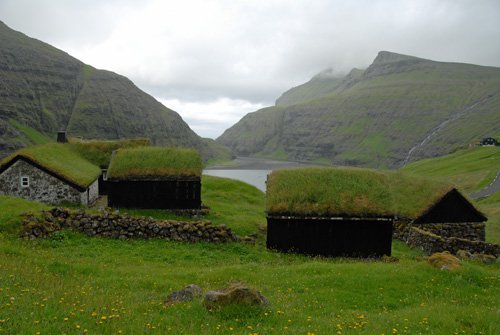 The view is of a cluster of farm buildings, all with typical sod covered roofs. This type of roof is still frequently used today all over the Faroes. The water visible below the buildings is the small fjord, which reaches in from the Atlantic, around a corner of cliffs. I spent the morning hiking down to the fjord and then followed its edge out to the ocean. As always the views were dramatic and I had the hike all to myself, save for the ever present sheep.

After completing my hike, I traveled to the northern tip of Streymoy and the village of Tjørnuvik. (I will write about that visit in a later blog.) At this point, suffice it to say that the engineering to build the road along the cliff face, just to get there, is spectacular. Eventually I backtracked far enough to cross over to Eysturoy, with my ultimate goal, the village of Gjógv. To get there I needed to drive over or around one of the highest sets of mountains in the Faroes, including the highest, Slœttaratindur at 882 meters or 2893 feet. On the way up I chanced upon a sheep shearing. 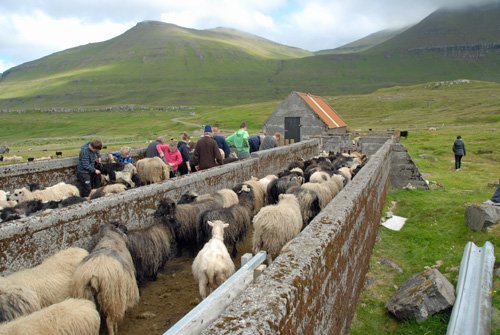 The sheep are herded off the mountain slopes and into the sorting/shearing pens (which are either stone, wood or, as is in this case, concrete). Here the adults are sheared and wormed. This particular location, like many, are far from any source of electricity. As a result, all of the shearing is done with hand shears, i.e. blade shearing. In this case, the shearing was being done by a group of young people, under the watchful eyes of the older shepherd. 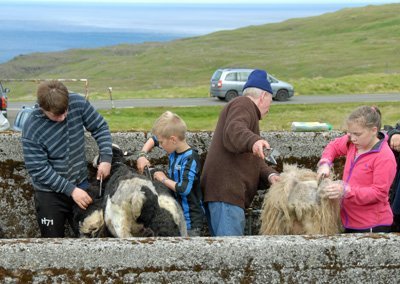 The sheep are sheared standing, rather than tipped up into the Australian position with which we are most familiar. 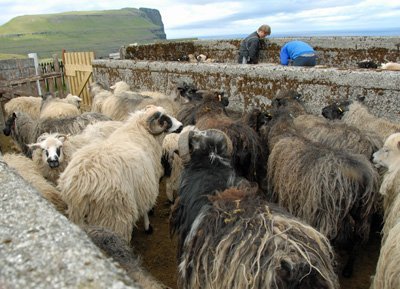 Here are some of the sheep, including rams, waiting their turns. When the sheep is completely sheared, the fleece is thrown over the wall, into a large pile. 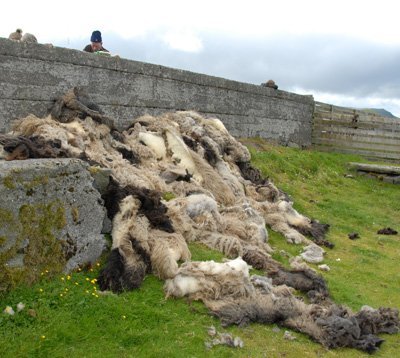 I was surprised at the lack of effort to both, 1) skirt out the poor quality wool (e.g. head and belly wool), and 2) the fact that the various colors were just piled upon each other, without any attempt to separate the different colors or shades. One of my regrets with this trip was that I did not get to talk at length with any shepherd. As a result I still have many unanswered sheep related questions.

Eventually I left the shearing and worked my way to the village of Gjógv, my base for the next couple of days. Gjógv means “gorge”; the small harbor for the village is, in fact, nestled at the bottom of a narrow gorge. 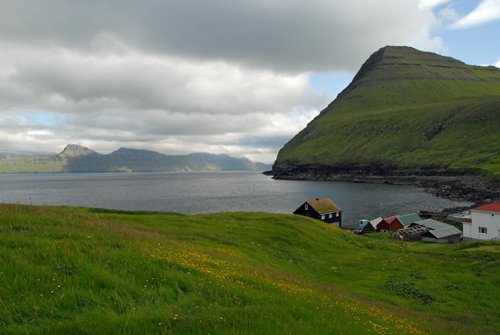 This is the view from just above the village, looking east to the island of Kalsoy. During this stay I was blessed with unusually beautiful and warm weather. Now equipped with my hiking boots I was all set for some lengthy hikes.

My first full day in Gjógv I hiked from the village to a sea stack, called Búgvin. This is the view of Gjógv before I had breakfast and headed off on the hike. Gjógv 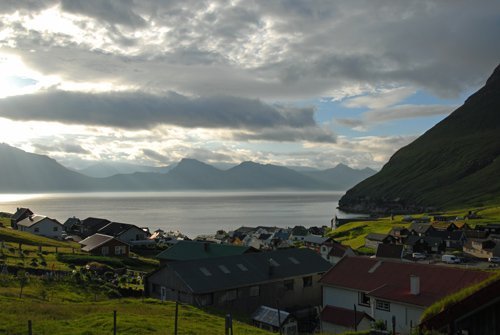 My route went steeply up along the edge of the northern sea cliffs that hem in the village. From the perspective of a Midwestern flatlander, this was a good place to stop for pictures and to let my pulse and breathing slow down. 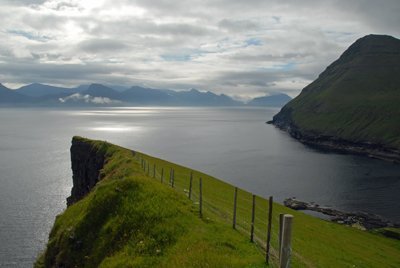 From here I entered into a valley that in turn rose steeply to the main spine of the island. 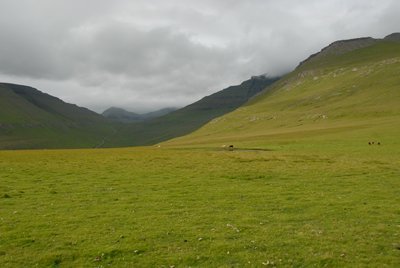 To the south looms Slœttaratindur (head in the clouds) and its slightly lower cousins. It is difficult to gain a perspective on the massive expanse of the islands. This picture is no exception, except that the little dark dots in the center and to the right are sheep!

Eventually I neared the top of the ridge. 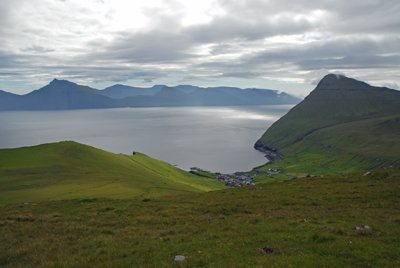 The little “finger” of land on the cliff edge below, about a third of the way to the center from the left, is the site of the previous photo.. Finally, here was the top of the ridge (I could not see it was the top until I reached it). This is still looking back to the east, from whence I came. 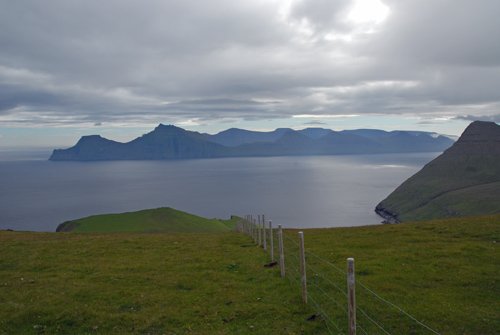 From the perspective of a sheep farmer, I am in awe of the Faroe shepherds, for many reasons, one of which is the amazing fence constructions which traverse the large upland pastures. The fences are not only impressive in their lengths, but also in terms of the steep terrain some of them cross or climb. Bear in mind that many of these locations are not accessible by motorized vehicles!

Over the top of the ridge I descended a long river valley, which ended appropriately, at the cliffs looking out over the North Atlantic. 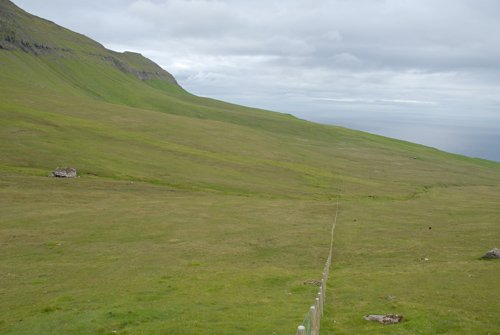 This is a view part way down the valley. Again for a scale perspective, pay attention to the rock on the left edge of the image. It is in fact a very large boulder with a hollow underneath. The sheep obviously love it for shade and shelter. 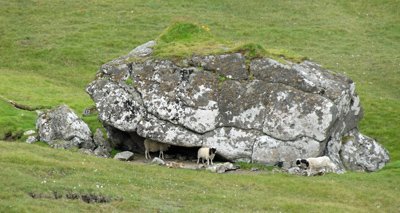 Initially I began to fear that I had taken the wrong route (there are no marked trails), as there was no sign of the sea stack Búgvin. It is, at 188 meters or 617 feet, the tallest sea stack in the Faroes, but it was nowhere in view…until I got quite close to the edge of the cliffs. 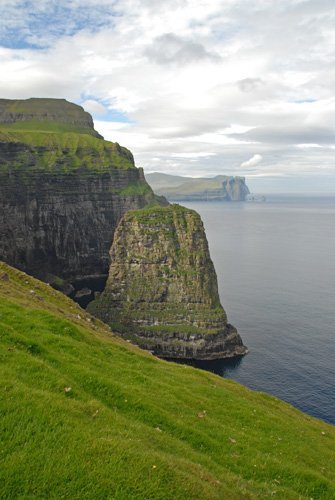 Again a sense of scale is complicated, as the huge rock is dwarfed by the cliffs around and above it. Viewed through my telephoto lens, the face and top of Búgvin is plastered with seabird nests which were so small that they were barely visible to the naked eye. I spent a long while on the grass, enjoying the solitude and the view as I was the first person into the valley that day and the only one for miles. Eventually I was joined by a couple from Austria (our paths were to cross again over the next few days!). On each of my trips abroad I let the self-timer on my camera take my picture at least once. So here is my “obligatory selfie”. 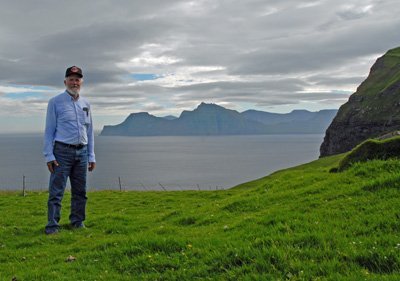 Búgvin is behind the camera and the island behind me is Kalsoy. (Please notice how clear Kalsoy is. In a couple of days I was nearly lost in fog there!) I am still sporting one of the shirts I purchased out of necessity in Torshavn (the sleeves were a bit long), and my Chicago Blackhawks cap, also purchased in Torshavn.

The trip “home ” to Gjógv was equally exciting. I was strafed a number of times by a Skua, a very impressive predatory seabird, obviously protecting a nesting site. My Blackhawk hat prevailed however and my head escaped undamaged. Once back at the top of the ridge, the view back down the slope to Gjógv had changed due to the movement of the sun. 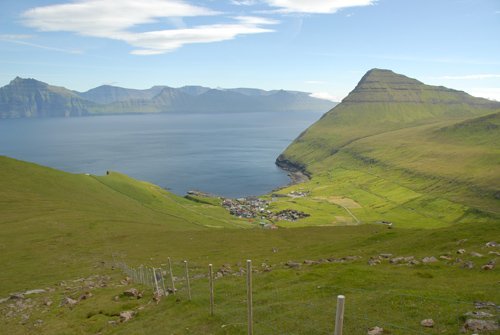 Part way down the slope also affords a good view of the only road that comes and goes from Gjógv. This was my route for the next day, as I eventually headed to Klaksvik. 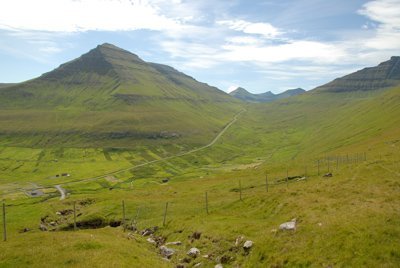 Back at my inn, I was able to rest and relax while I enjoyed the view and one of my new favorite beers, a Föroya Bjór (beer) called Black Sheep. My time in northern Eysturoy was beautiful. Next time, I hope to write about, among other things, making hay in the Faroes.