Apologies are due for the rather infrequent number of entries in the Ewe Turn of late. We seem to have entered a form of semi-hibernation recently. It has been rather pleasant! Soon the pace will be quickening in and around the farm. So it is time that the blog is brought back up to date. What follows, while not an epic tale, should have been told in a number of installments. But, to get caught up, the tale may run at bit longer than normal.

Due to a number of unrelated reasons (primarily weather and shepherd health related), manure storage and distribution had fallen woefully behind at Whitefish Bay Farm. Our normal routine is to clean out the barn 3 to 4 times a year. The clean out could not be achieved without the help of a skid-loader, one of the niftiest of mechanized tools. Once removed from the barn, the manure is stored in a concrete enclosure, where, over time it will heat up and decompose. The decomposition is accelerated by periodically turning over the pile (again with the help of the skid-loader). By fall the pile has “miraculously” shrunk. The resulting compost is then ready to be spread upon our hay fields and pastures where it serves as our primary source of fertilizer.

In the fall of 2009 I had nearly completed the November clean-up of the barn when Ulmer, the ram, placed my ankle, and thus me, out of commission. The immediate result was a year’s worth of decomposed manure that went un-spread. By the time my ankle was healed, and lambs were delivered and cared for in spring, it was too late to spread  the pile. (Wet, soggy pastures and hayfields do not take kindly to heavy lug-tired tractors pulling equally heavy manure spreaders.) All of us (sheep and shepherds) managed to work around the backlog, knowing that fall would again return and with it the opportunity to finally catch up on the now monstrous pile. Indeed, by October, Eunice (the skid-loader) and I had managed to make room enough in the pit so that we could get the barn scrapped out before the sheep returned from their breeding groups. About a quarter of the way into the barn Eunice decided to have numerous hissy fits. It was only then that I remembered that she was over 20 years old. We needed to face the reality that she needed to move to a retirement home.

Eunice was rather unique in that she was short and narrow enough that she could fit through barn doors built when horses provided the power on the farm. Twenty years after purchasing her new, we discovered that skid-loaders, like so many other pieces of farm equipment, now came only in larger sizes. Eventually we located a different brand of skid-loader, which while a bit wider and longer than Eunice would appear to fit through the barn doors. The major concern was length. The narrow passageway beside the barn required a sharp left turn (with no room to swing out) to get into the barn. Without other options we traded Eunice in (before she died) and replaced her with a new skid-loader, now named “Gayle”. We had to await her arrival before we could know if the left turn was possible. If it could not be done, our only solution was to widen the concrete ramp as it approached the barn door. I am sure most of you can see what is coming!

Gayle had to be built before she arrived. While we waited, so did the partially cleaned barn and the nearly overflowing manure storage. November arrived and progressed. The sheep returned to the barn from breeding. Finally Gayle arrived, a beautiful and quiet machine. And yes, she was a bit too long and lanky! I quickly called all of the concrete contractors I could find, only one of whom returned my call. Luckily he did farm work, was finishing a job near by and could come over the same day to look at the job. Even more fortuitously, he could do the job the next day. We scurried around to get things set up for him. On November 11th Mike and one helper arrived right after morning chores. By mid-afternoon the pour was done! 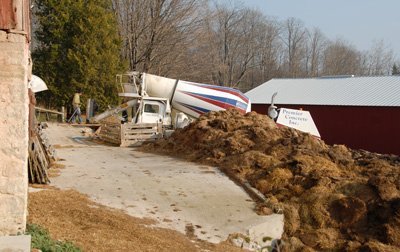 After a number of days the concrete had cured enough to once again try maneuvering Gayle into the barn. It worked! The weather was cooperating, so the entire flock got another two days all together in the entire first pasture, where they thoroughly enjoyed the large spaces and room to romp. I, on the other hand, had to learn a new set of skid-loader operating controls (since they are by no means standardized). But we were back in business!

By early December Gayle and I had made a big dent in the manure storage pile. The picture below is after 42 loads had been spread on our large hay field. As can be seen there was still lots of work ahead.

The following photo is of Gayle and a not so grumpy shepherd admiring our work for the day. 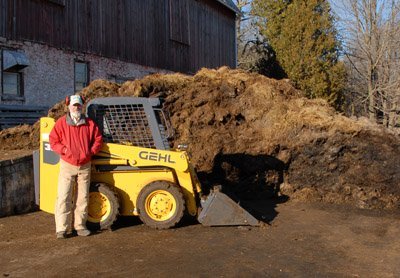 Those of you from the upper Midwest may remember that we had a blizzard in early December (crushed a number of barns in northern Wisconsin and the Metrodome in Minneapolis). The snow put our manure moving operation into a long hold. Amazingly we had a major thaw by the new year. The snow nearly disappeared but we had to wait for the upper few inches of ground to refreeze. But, we persevered. By January 11th the last load awaited its turn in the spreader. This would be the 72nd load. The only compost that did not get spread were the chunks frozen to the outside walls of the storage. 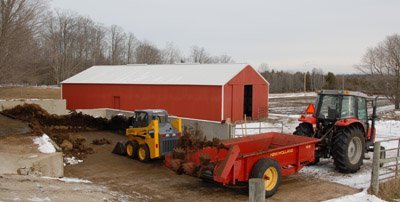 This brings us up to the present. The storage area is again filling, but this time it is all snow. We are on what appears to the the outer edges of a major snow storm headed across the Midwest. For me it is a beautiful sight. 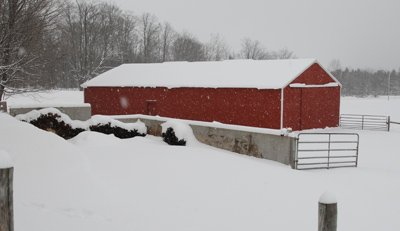 For those of you who have waited patiently for this arduous story to end, here is your reward: a view across the 1st pasture, to the south. The fences are about to be engulfed in a snow drift. This is why the sheep are happy to be inside in a dry, clean barn! 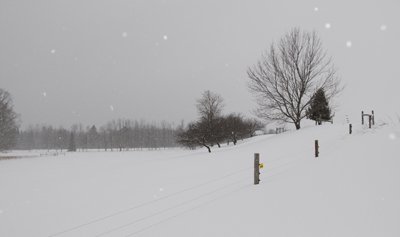