*(My apologies to Charles Dickens for the title. It is as close as I will come to commemorating the 200 anniversary of his birth.)

Winter is a time when we get to observe some of the details and idiosyncrasies of flock behavior. Mostly this is due to the fact that we are closer to the flock for the entire day, since they are not spending time in some distant pasture. Especially while they are eating at their feeders in the barn, they are in a much more confined space. Just like us, most members of the flock have preferred places to eat dinner, or to stretch out during the day to relax. If we know that we have to catch up with a particular sheep to, for example change a jacket, we can easily guess where certain individuals will be found while eating. Lucy and Lady Harriet will always end up in at the feeder in the far northeast corner of the barn. Suzy is always at the feeder next to the “bay window” on the east. Kassia helps Hope sample the hay as Gretchen passes it over the fence to me for distribution. Before I get to the last three feeders, Kassia will abandon her sampling station and head for the third to last feeder. Hope, on the other hand, will wait until the last of the hay is served, just in case there might be an extra tasty handful still to come. Then she will cruise to which ever feeder offers extra head space without crowding.

Once the first bit of hay is consumed, the “drinkers” appear at the automatically filled waterer (which at that point has just been cleaned out). Winona is almost always there first, perhaps followed closely by Rice Krispy. Tessa and twin sister Tess are both slurpers. It could be pitch dark and we would know if they are drinking.

And so it goes with favorite lounging/sleeping spots. Some spaces are geographically preferred, other locations are dependent upon who is nearby. In some situations, if you look carefully one will notice extended generational groups. Even though Mindy is nearly 11 years old and her daughter, Nanno Nanoo, is 10, they will often be found within a general vicinity of each other with perhaps a granddaughter or two nearby. Other mothers and offspring could seemingly care little about each other. Here is a bunch, Wizzbang, Winona, Zahra, Windy and Nannoo Nanoo, just waiting for shearing to begin. Since pictures were being taken they would not reveal their lounging preferences. 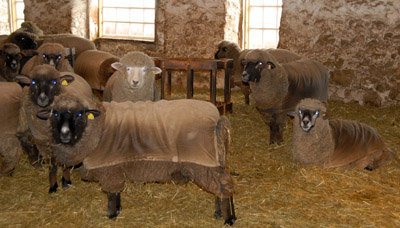 Each year a couple of months before shearing, we place the previous spring’s lambs in a separate pen in the barn addition. This allows the pregnant ewes a little more space, peace and quiet toward the end of their pregnancies. It also permits us to change the lambs’ diet to aid their winter growth. It means that for a time mother and lamb will communicate with each other. After a while it does not seem so bad being just around the corner from each other. A few, like Winifred and her lamb, Alfred, still maintain communication.

This year there are 14 lambs in this group in the “new” barn. Each year they develop a unique group personality. This year’s group will always be associated with their water buckets. 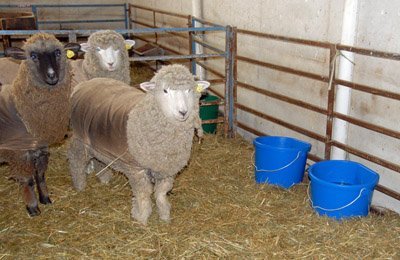 This year we needed to replace the two heated buckets that we use in this portion of the barn. We purchased two identical buckets which now sit side by side. At nearly every feeding the right hand bucket has significantly more water left. My initial thought was that perhaps I failed to wash that one as well as the left hand bucket before first using them. Re-washing changed nothing. Out of curiosity I switched the two buckets. The next meal the right hand bucket was half-full and the left hand one nearly empty. And so it goes. This bunch of lambs have leftist drinking preference. You be the judge: Are these three lambs, Artemesia, Ainsley and Adelaide, and their buddies up to something? Is it a plot to confuse and confound the shepherds?