Technical News and Lots of Rain

Welcome to our updated website and updated Ewe Turn. If you have been following our blog for a long time you may have recently discovered that we have a revised website and a revised EweTurn. The blog has a new address (https://whitefishbayfarm.com/ewe-turn-blog/). We hope that all of the changes that we have made are for the better. It has just been two weeks since we set everything up and there are still a few glitches to take care of, but they are slowly being resolved. For the time being if you wish to comment on a blog posting you must first click on the particular post before you will be able to open the comments section. Sorry for the bother; we hope to make this a bit easier in the future.

The reworking of our website has taken a lot of time and effort. I would like to thank our web guru, Gregg for all the time he has devoted to us. At least it has been a convenient time for us to devote a lot of attention to computer work. For the last month our outside activities have been hampered and often curtailed by the weather. To say that the month of June has been wet is an understatement. May was also a bit wet (10 days of measurable rain). But June has been at entirely different level. We have experienced 17 days of rain and there are still 2 more days to go. (And yes, it is raining as I write!)

The vegetable garden has been planted in stages: whenever it is dry enough to work the soil. The early plantings are doing well. The peas, tomatoes, peppers, eggplant and artichokes are thriving. It may be a difficult time for the other plantings. We will have to wait and see. Of greater frustration has been pasture and hay management. The pastures are growing madly; the sheep cannot keep up and are often in the barn because of heavy rains and potentially violent weather. Of greater concern is that we have yet to cut and bale a single bale of hay. Since early June there has not been a time when enough dry, sunny days could be strung together to permit hay to be cut, dried and baled. So far there is no end in sight.

On the bright side we have had one project that we completed before the heavier rains fell. If I had been able to cut and bale hay this would have been a task that was just put aside. Some of our permanent perimeter fences are starting to show their age. Over the last couple of years I have described smaller projects to repair sections of fencing. This spring I was able to tackle a larger project. 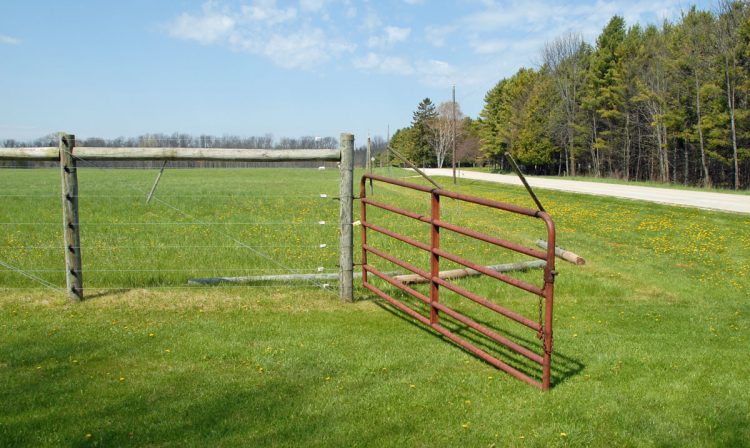 In 1990, the fence that surrounded our cherry orchard was the first high tensile fence that I had ever built. It’s purpose was to exclude the White-tailed Deer population. The orchard has now been gone for many, many years, but the fence still functions as a pasture fence for the sheep. The wooden posts are 10 feet long and hopefully, but not always, were buried 4 feet deep. Over the last 27 years the annual freezing and thawing cycle had begun to push some of the posts out of the ground. If the post had not been properly buried, the tension of the 7 wires also acts as a force to slowly pull the posts up and also out of alignment. The stretch of orchard fence that parallels Clark Lake Road was in the worst shape. In mid-May, before we had enough hay to think about baling, I disassembled that stretch of fence. With the help of one of our tractors, I was even able to pull each of the seven posts that are involved, without damaging them. Surprisingly they were in still good shape and could be reused for the replacement fence. I also had a number of neighbors concerned. They stopped to ask if I was taking down the fence because we were getting rid of the sheep! 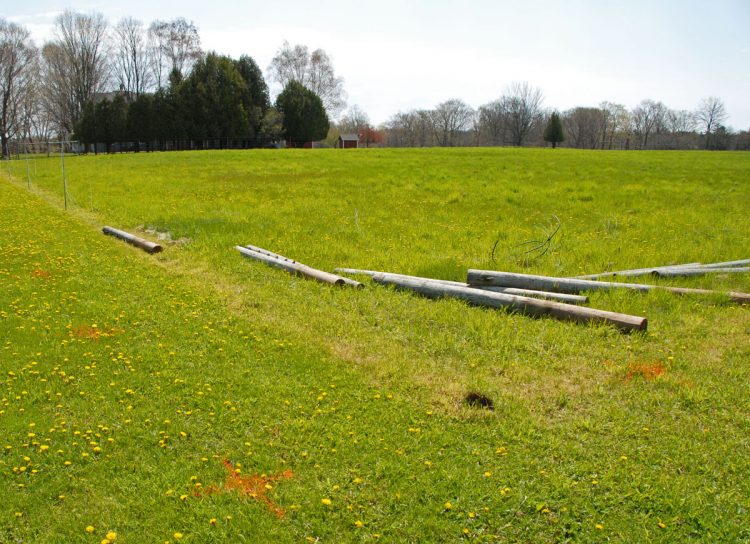 This is the pile of seven posts and 4 cross-brace posts after they had been removed. The orange crosses mark the location for new holes. In the meantime the wire was dangling loosely on the pasture floor. 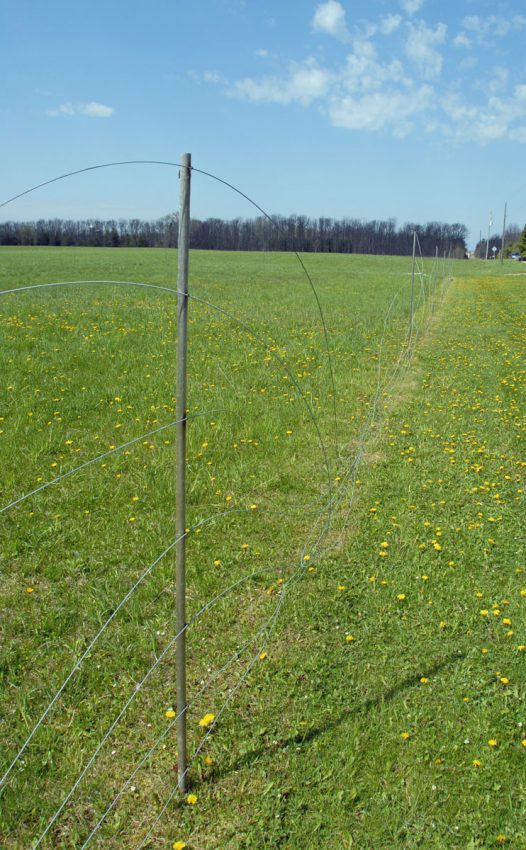 The holes for all of these posts were originally dug by hand by me. It was a difficult task, often complicated by the presence of large stones buried under the intended path, but made easier by my relative youth. 27 years later I managed to locate someone with a very efficient and sophisticated post hole digger attached to a skidloader. In less than an hour all seven holes were dug to a full depth of at least 4 feet and any boulder that stood in the way was not a concern. Luckily all this work was done before the ground became supersaturated by all the rain. 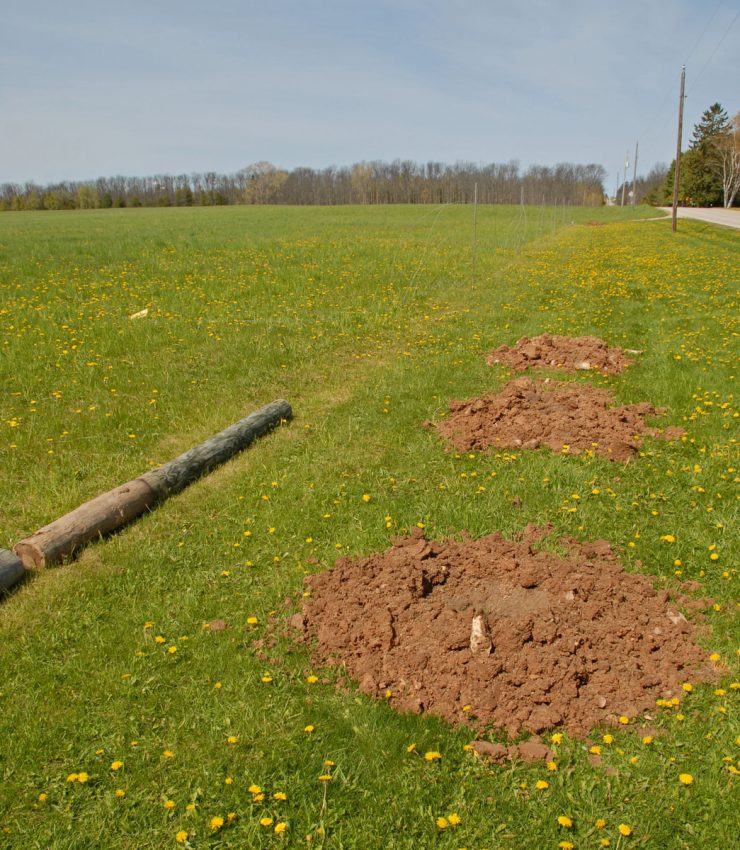 The task of rebuilding the fence was slower, partly due to the manual nature of most of the work and partly due to having to work around rain storms. Nonetheless it has been completed. Unlike the old fence which stood over 6 feet tall, the new edition stands a diminutive 4 feet. But it still uses the old galvanized wires (which also were in excellent condition). Thus, we hope to have a very effective electric fence to keep the sheep in and predators and other interlopers out. Eventually, I plan to work my way all the way around the pasture, rebuilding the fence to a lower level and eliminating  the design flaws and frost heaves. But that will have to wait.

This week the sheep got to inspect and test out the new fence. Here they are on a wet dreary day, having grazed their way to the front end of the pasture. Hopefully, we soon can write about weather that is suitable for baling hay! 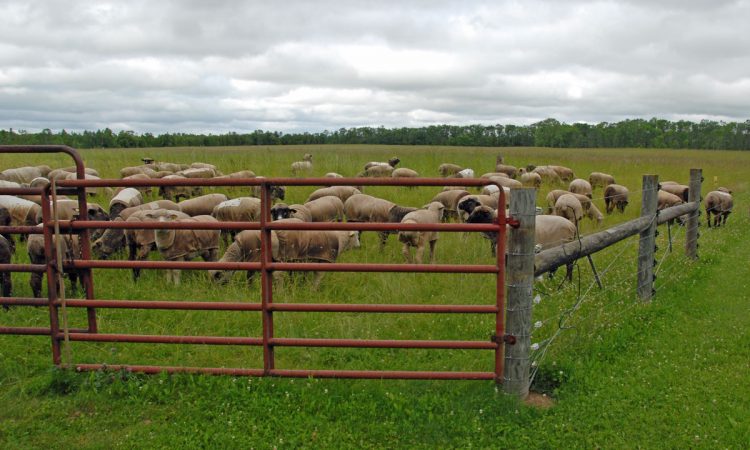