The cycle has begun again

It has been a good while since anything has appeared in the “Ewe Turn”. It is therefore time to get caught up with events and goings-on. First and foremost, the breeding season has now officially ended. As of 19 November all of the flock is back in the barn and the rams are back in bachelor quarters. This all occurred none too soon, as the deer hunting season begins on the 21st and it is thus prudent to make sure that sheep and shepherds are out of the line of fire. Those familiar with deer hunting in Wisconsin know what a big event the next 9 days will be.

The weather for breeding was generally miserable: cold and rainy. We did not have any hard freeze-ups and therefore our pasture water lines did not freeze up for the year. Breeding lasted about 4 days longer than planned, due entirely to a severely sprained shepherd’s ankle. The extra extension did not, however, result in any further breedings. How do we know? What follows is an abbreviated lesson in controlled sheep breeding.

There is a wide extreme in terms of how shepherds approach breeding their flocks. Outwardly the easiest method is to put one or more rams in with the ewes for a given time, usually at least a month. When the rams are removed the hope is that the ewes are all bred. Short of later use of ultrasound, the only way one can measure success in this system is to wait 148 days and see if lambs begin to appear. 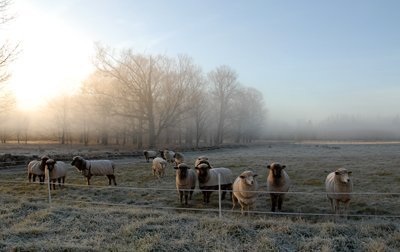 Ulmer and his girls on a frosty morning

The other extreme is to place a ram with a given group of ewes (a good ram should be able to deal with at least 50 ewes) and closely monitor their performance. This is done by placing a harness which holds a large crayon on each ram. When the ram mounts a ewe he leaves his mark. The observant shepherd makes note of the date. When the ram has been with the ewes for about 17 days the crayon is switched to a different color. Seventeen days is the usual heat cycle for sheep. If the ewe has not become pregnant she will come into heat again in 17 days and the ram will again try to breed her and thus leave a new color on her rump. If he does not remark her it is a good sign that she is pregnant This is the system which we employ. It is much more labor intensive for us, but we feel that the advantages outweigh the extra work. 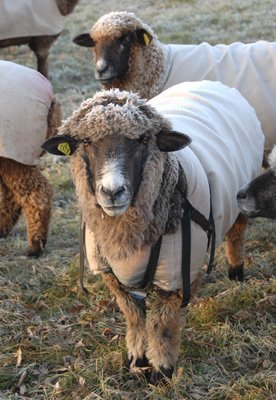 What did we learn this fall? We hoped to breed a total of 63 ewes using a different ram in each of 4 groups.

There it is in a nutshell. Now “all” that remains for us is to get all the equipment and portable fencing in from the pastures before the weather turns cold and snowy. After that is done we can spend some time being friendly with our ewes again and not have to keep a watch out for a ram who feels that we are threatening his ewes.