It seems that nothing has been posted to the “Ewe Turn” in quite a while. It was starting to worry us sheep, as a matter of fact. The flock started to become concerned because we had not seen any sign of the old shepherd guy in a very long time. So, as usual, they appointed me, good old Nanoo Nanoo, to do some investigative research. Just about the time I came up with the answers the old guy showed up. After nearly two weeks absence there he was again. On top of which he was not even grumpy! By listening to the nice lady talk to her friends and eventually logging into the old guy’s computer I have pieced together the story. I even found some photographs in the computer that will help me with the tale. So here it goes!

We already knew that the old guy has ties to the land of Pussa the Cat, a place they refer to as Denmark. A while back it was decided that he needed some time off. So, nearly as soon as he had finished baling the last of our winter’s hay he left us. I suspect that the nice lady was glad to get rid of him for a while, even though she denies it. She had some friends help her out at times while he was gone, so we were well looked after. It turns out that he has something like an adoptive family there and was off to visit them and the place he lived many, many years ago. He flew there, which means that it must be really far away. We have not figured out if he flew with the cranes or if he managed in some other fashion (I’ve yet to see a shepherd fly!). We have heard him talking about what it was like once he got there, but he was a little vague on the flying part.

When he arrived in Denmark for a few days he visited Odense on the island of Fyn, the placed that he once lived and where he attended school (or gymnasium as they call it). He traveled around visiting old haunts both in the city and the countryside nearby. He has a neat picture of fishing boats on Kertinge Nor, a place he had not been to before. 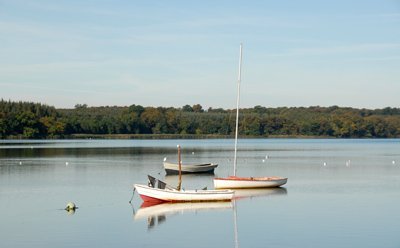 He spent nearly one whole day just walking along the shores of Odense Fjord out on a peninsula called Enebærodde. He claims that it is one of his favorite spots. Just to prove that he was there he took a picture of himself along the Fjord. 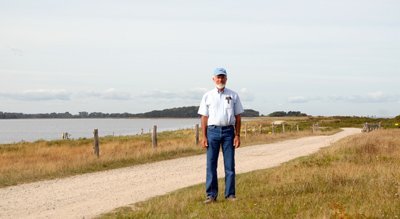 A few days later he went to the south of Fyn where he once lived at an agriculture school while he tried to learn the language. They have some beautiful old buildings there. My friend Queso worries that maybe he is looking for a new farm. I try to assure her that he is not doing anything of the kind. Even if he was, I am sure he would not leave us and the nice lady behind. Actually, it might not be a bad idea owning a second farm, as there are some beautiful manor houses there. Somehow though I think he will have to raise the cost of our fleeces before he could swing it. 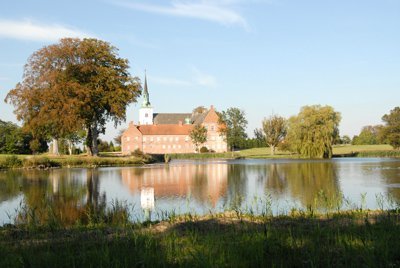 As it is, some of the barns that accompany the manor houses put our barn to shame. 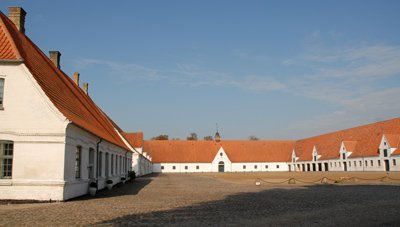 On top of that they are much older than our place, in some cases more than 200 years older (ours is already 103 years old). It might not be so bad a place for us, come to think of it. 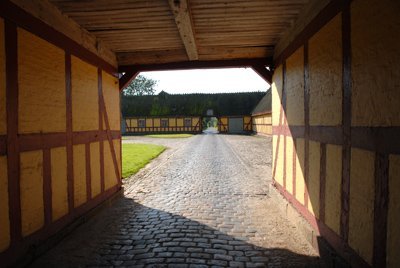 Later on in his trip he went to Jylland in the west. For a while he stayed at a B&B much like ours. It is out in the country and has its own flock of sheep, along with very nice people who own it. He even located some of our cousins. They are called Gammel Spelsau sheep and come from a very old line of Nordic sheep. This flock looks as though they have some very nice pasture and a beautiful view of Hinge Sø (lake to us). Maybe Queso is right…. 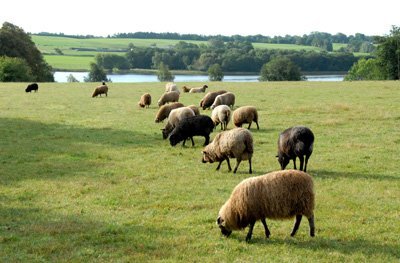 His next stops were in two towns, Silkeborg and Ribe. It is there that three of his five “brothers” live. He talks about having a wonderful time with them and their wives. They stayed up late each night and talked about all sorts of things, old and new. I think he was very glad to see all of them. By the time his visit was over he was again speaking Danish fairly well. It will take much longer to improve further to the way it once was. Once he returned home to us however, he has occasionally slipped into the other language without realizing it.

At least he is now home, where he belongs and where he can again look after us. He seems glad to be home, even if at times he gets wistful about his “old home”.  We are glad he is back. He is still the old bearded shepherd after all, and perhaps for a time he will not be so grumpy.