It is amazing the difference that a couple of inches of rain can make. It renews the soil and hence the plant life. It cleans up a dusty world. It brightens the soul and the humor, both for humans and sheep.

Over much of June and all of July we received very small doses of rain. The result has been a virtual stoppage of any pasture re-growth, a reduced volume of first crop hay and no second cutting of hay. The vegetable garden seemed to refuse to grow, despite liberal amounts of irrigation. Our humor started to flag. Perhaps the only factor that seemed to soften the dryness was that it has also been unseasonably cool.  The most dramatic effect was the loss of any grazable pastures for the sheep. Two weeks ago we were forced to import a semitrailer load of large square bales of nice hay. The day after the hay’s arrival we began feeding it to the sheep. Each bale weighs between 800 and 900 pounds. To provide enough space (barely enough) for the flock to all get at the bales, requires feeding four bales at a time, with each bale surrounded by its own expandable feeder. The older adults have been here before and recognized immediately what was happening. We had no need to teach the lambs and younger ewes what was going on. They just followed their elders’ lead. Within 5 days the first four bales were gone. After setting out the next four bales we were settled into a what looked like a long and less than enjoyable experience. With a total of 51 bales we at least figured to be able to survive for a couple of months. If there was no rain in that time we would already be taking more drastic steps to survive. 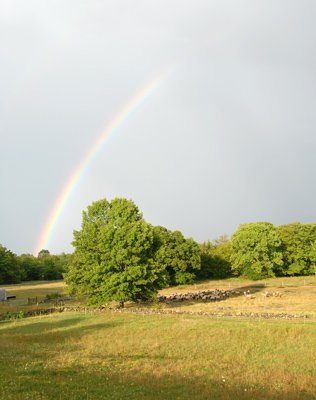 Finally on the 3rd of August we received over an inch of rain and in the next week we enjoyed another 1.5+ inches.  It has been able to get the pastures to begin greening up, but it will still be a long while before they are again deep and lush. Hopefully we have turned the corner. The vegetable garden produced the most dramatic response. Tomatoes and peppers finally looked healthy and began to produce. Squash, melons and cucumbers that all refused to grow now seem to march across yards of the garden in a day. It is once again dangerous to walk too near the zucchini; one may get hit by a fast growing monster! The weather patterns this summer have produced strange harvest schedules. The cherry crop was a couple of weeks behind and the fresh pea harvest a month late. It was strange to be picking peas at the same time the cherries were ready for harvest. At least this year’s cherry crop is strong, compared to the virtual non-existent crop in 2008. Most times  I do not miss the work involved with growing our own cherry orchard. However, the first day or so of harvest is still exciting, even if it means picking from another orchard. 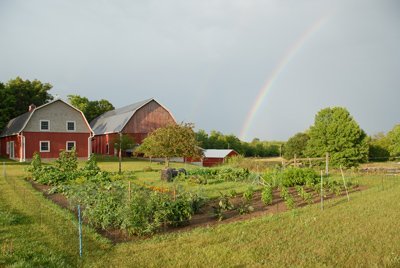 The vegetables soaking up the moisture

Life thus is still moving along at Whitefish Bay Farm. We continue to enjoy the guests who have chosen to stay with us. In July we had our first guest from New Hampshire. Since we opened the B&B we now have had visitors in the B&B from every state save for Wyoming. It is time that we offer a discount to our first Wyoming visitor so that we can complete the “collection”. We have also had guests from 31 foreign counties. Perhaps it is a sign of the economic times, but this is the first year since we opened the B&B in 1991 in which we have not had at least one foreign guest. We especially miss that experience!

In the Gallery we are currently in the midst of our second seasonal show. It features the photography of Dan Anderson and the fiber creations of Carol Rhoades.  Dan is one of the county’s most well known photographers. He works in both black and white and color. On display are works showcasing Door County farms and seasonal landscapes, as well as images from recent visits to Italy, Greece and the western USA. Carol is an extraordinarily gifted knitter and spinner. She contributes regularly to Spin-Off Magazine, is on the faculty at Siever’s School of Fiber Art and conducts spinning and knitting workshops throughout the US and Europe. Carol has created a series of hand spun, hand knit and beaded wrist warmers in natural fibers produced by sheep and angora goats raised in Door County. Each set of wrist warmers is an original pattern and design. For this show she has also created several hand spun, hand dyed and hand knit scarves.

Lastly, not to be out done by anyone, our colony of barn swallows is busily feeding their second brood of chicks for the year. The earliest of the new broods has just launched and it appears that the rest will be ready in the next week or two. It is a special treat to have the adults and the earlier chicks all flying over the pastures in the early morning, vocalizing their excitement for the day to come. They too seem to have a special appreciation for the recent rains. 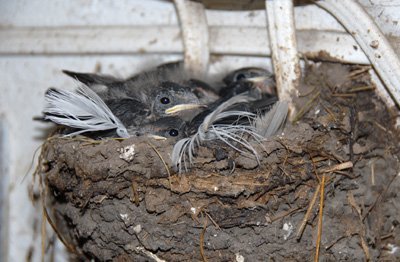 No room at this inn