Things I Learned this Fall

I just discovered that the old shepherd guy has not been letting the world know about what is happening here at the farm. He hasn’t written a blessed thing in over a month! Some members of the flock have been grumbling that his mind has been on vacation a lot more than usual. Since I still haven’t had enough time to get to know the old guy, I’ll just give him the benefit of the doubt and not be too critical of him for now. But having written all this, I figure that I better take the initiative and get everyone up to speed, at least as far as the flock is concerned. I have also learned a few things since I last wrote, so I thought you might be interested.

Back at the end of September there was no pasture left for us, so the old guy put these large hay bales out for us to eat every day. They didn’t taste as good as our homegrown hay, but we got used to it. (We had to, I guess, we had no choice!) It can get kind of boring going out to the same pasture day after day. The pasture with the hay bales is right next to the road. That meant that we got the usual amount of humans beeping their car horns at us as they drove by. Even the folks on those little, smelly mopeds did it. I can’t understand why they are all so scared of us. You’d think they believed that we were all about to jump over a four foot high fence, run up the hill and attack them. After a while you just get accustomed to it and ignore them entirely. I used to wonder why lots of the flock say that the shepherd guy is grumpy. I can now start to understand that a bit. We overheard a few things he had to say about those horn blowers. It wasn’t too pleasant.

After about two weeks of us eating these big bales and ignoring the horn cacophony, Mr  and Mrs  Shepherd got all of us together in the barn one day. They started sorting us into different groups. They put all of us lambs and all of the older retired ewes in one big group and then they made smaller groups of about 12 younger ewes (like my mom). When they had one of those groups set up, they would kick them outside the barn. The next thing we knew they were hustling one of those handsome rams out the door. The shepherds, ewes and ram would disappear out to one of the distant pastures. They repeated this three times. Then it dawned on me, these were the famous Breeding Groups! Now I know…. Boy was I put out when I saw my hearts delight, the guy called Axel, go charging off with one of those groups and I wasn’t included. Mom had warned me that they never let us lambs go off until we were another year older. A girl can dream at least…. There were still three rams left in the barn addition. Were they ever ticked off when it turned out they did not get any breeding groups. For the next few days they took it out on each other.

We missed not having lots of the flock with us. We could see and hear them off in different pastures. But once they were all settled in, the rest of us just got to return to our boring, big square bales of hay and car horns. The strange thing about this period was that all of a sudden it started to rain after nearly getting no rain all summer. The ewes and rams in the breeding groups got wet, since they do not get to come back to the barn. The old bearded guy seemed to vacillate between being happy and then grumpy. Every day that it would rain he kept us indoors and fed us our winter hay (which tasted really good!). On those days we could see him running around our big bales trying to cover them with tarps. That was nice of him; wet, moldy hay tastes terrible. All that extra work put him in a foul mood, but then he would lighten up when he realized that we were getting much needed rain. He seemed to get even grumpier when the nice lady went away on vacation in the middle of all this.

Then came early November. The nice lady returned. The next day, the two of them brought each of the breeding groups back to the barn. They grabbed the ram from each group, removed his marking harness and put him back into the ram pen in the barn addition. The old shepherd made the ram pen smaller so that they had less room to back off and fight each other. After a few days they sort of settled down. I personally think they stop fighting ’cause their heads were too sore.

It was nice to have everyone back together, even if the nice lady went back on vacation again. The old bearded guy decided that we would not go back to more large bales. I think he was tired of covering and uncovering them, plus he was worried that we might not have any water. It is, after all November and it is supposed to get very cold, meaning the pipes on pasture would freeze. So he has been feeding us winter hay plus grain (hurrah!!) each day inside. 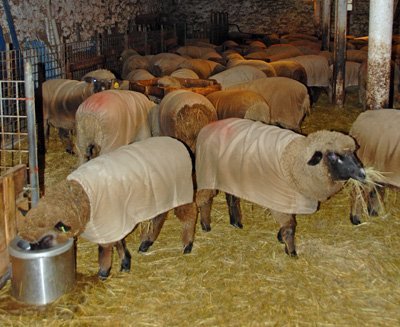 Even on a dark, gloomy morning, eating home grown hay is pretty nice!

And now I know why they say he is grumpy! A couple of days after everyone returned to the barn and the rams were back in bachelor quarters, we had a party (without shepherd approval, I should add). One night while the rams were fighting with each other, they managed to bust open a gate to their pen. Next thing you knew they came over to join us. I learned a few things that night which I don’t think I should share with you. Did we ever have a rousing good time (at least until the old guy showed up the next morning)! He said some things that weren’t too nice and I learned a few new words I hadn’t heard before. Old grumpy got all of the boys back into their quarters (which I might add now has an extra chain around the gate!). As you can probably imagine, breakfast was served a bit late that day! 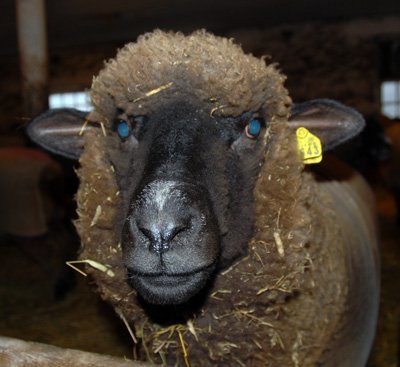 Viola, still has parts of breakfast on her face!

So that about covers it. Hopefully I have gotten you up to date. I am hoping that the old guy starts writing here soon. I am tired after all this extra work. I promise to keep  eye on him for you. Respectfully submitted,