It has taken much longer than I ever expected to get a new posting to the Ewe Turn. I will shoulder some of the blame; the balance has been out of my control. Originally I had planned to write when the breeding time for the ewes was over and everyone, ewes and rams, had returned to the barn. That has indeed happened, but quite some time ago.

On November 4th we brought everyone home from their breeding groups out on the pastures. It was an intentionally short period that the rams and ewes were together. Basically it was one complete heat cycle, plus an extra few days to allow for heats that were ending right at the beginning of breeding. In essence, the ewes had the opportunity to get bred within one complete heat cycle (17 days). Hopefully, it will mean that every ewe was bred within a period of about 25 days. In reality, we rarely get 100% bred in that time. What it will guarantee however is that five months later all of the lambs will be born within 25 days of each other. For aging shepherds that is a much more manageable schedule than a lambing period of say 50 days in length.

Rhett, Ulmer and Ukiah all appeared to do their jobs. By the 4th of November each of their ewes had been marked by the crayon the ram wears. As expected there were a couple of re-marks for the ewes that had been marked at the very beginning of the process. Short of using an ultrasound devise to find out if each ewe is pregnant, we now just have to wait for nearly five months for a definitive answer. We should get a better view when the flock is sheared in late February.

For quite a while all of the flock has been settled into their winter routine in the barn. Knowing that, one can be justified in wondering why there has been no Ewe Turn news from the farm for so long. The tale has three chapters, none of which are directly connected with each other, but all of which have prevented me from doing much writing.

Let’s start with chapter one: Web site redesign. It had been our long term plan to spend part of the fall re-designing and tweaking our web site (something that needed to be done for quite a long time). In early November we were making good progress. By then perhaps a quarter of the pages had been re-worked and re-published. Unbeknownst to us at the same time major changes were having to be made to our internet service provider. It is a long classic tale of big corporate takeovers messing up successful little operations. The details need not be covered here, except to say that for a couple of weeks our website essentially did not exist. If during that time anyone tried to visit our website, including this blog, they would have found little or nothing. Happily the difficulties are being overcome. We are now able to blog again and we can continue with the make-over of the rest of the website. Thanks to all who have inquired about our absence.

Life tends to get in the way of many things, which brings us to chapter two. Despite the problems of the website, we still would have been prevented from a normal routine. It is easy to forget that health issues are always present with us and the sheep. Sometimes the most distracting issues are the most unexpected. Over a three week period in late November and early December we were confronted with a problem with Appaloosa, one of the ewe lambs that we had decided to retain for breeding. She developed swelling in both of her eyes. The vets were called and the thought was that she had some sort of unusual infection/irritation. We treated it with twice daily applications of a fancy eye ointment. The problem improved briefly and then returned along with a goiter-like swelling under her chin. This called for another visit from Paul, the vet. This time while examining Appaloosa we also found a small swelling on her throat. It was hoped that it was an infection, the location of which was causing some restriction of the blood flow back from above the swelling. In a sense it was causing edema.

We then started a course of antibiotics and cortisone. Over a week’s time there was momentary improvement with a quick return to and worsening of the previous state. It became evident that the swelling on her neck was growing rapidly. We asked Paul to return a week later, as we all feared at this time that the swelling was a tumor of some sort. It was now restricting her breathing. It was agreed that we would have Appaloosa put down. Paul performed a necropsy afterward. The size of the tumor was astonishing. It was perhaps 3 to 4 pounds in weight and 7 inches long and 4 inches around, completely encircling her esophagus. Paul had never seen such a tumor in a sheep, nor had we. We send tissue samples to the State of Wisconsin Veterinary Lab. The result indicated that the tumor was a very aggressive Lymphoma.

Aside from her death, the saddest part of Appaloosa’s tale was that throughout all the time that we were trying to treat her with numerous shots and application of ointments Appaloosa never seemed to become more fearful of us. She remained friendly to the end, as if she was aware that all this attention was somehow meant for her good. Because of her patience she will be missed even more.

On to the final chapter of this tale. I related in the previous posting to the Ewe Turn that we had experienced a significant power failure in October. Since this was the third major power outage we have had this year, we finally made the major decision to have a back-up electrical generator installed. The last six weeks has been the ongoing saga of having to deal with a number of contractors and services (most notable being our local utility provider). Just about the time that the web site was restored, final installation of the generator took place, resulting in, yes, a few more temporary outages. The problem was compound by the fact that we decided to have the power cable from the road buried underground. This entailed going under Clark Lake Road and all the way to where the power had always gone underground from the meters to the house and barn. 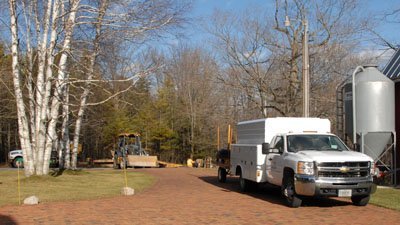 Only the first of many crews on site installing a generator

We took the extra step because the old power cable went right through the large maple tree at the end of our driveway. It was a cable ready to be downed anytime with the next strong wind storm. The finale of the job last week involved the near simultaneous presence of the electrical contractor, the excavators, the natural gas company and the utility provider. To add to the chaos the township building inspector arrived to peek over everyone’s shoulder without giving the impression that we knew what he was looking at. It was the proverbial Chinese fire drill! At least we now are assured a backup power supply. I need to do some landscaping to repair holes dug in the lawn. That will have to wait until spring. Oh…did I also relate that I have to take down the old power pole? (It seems that we “own it”!)